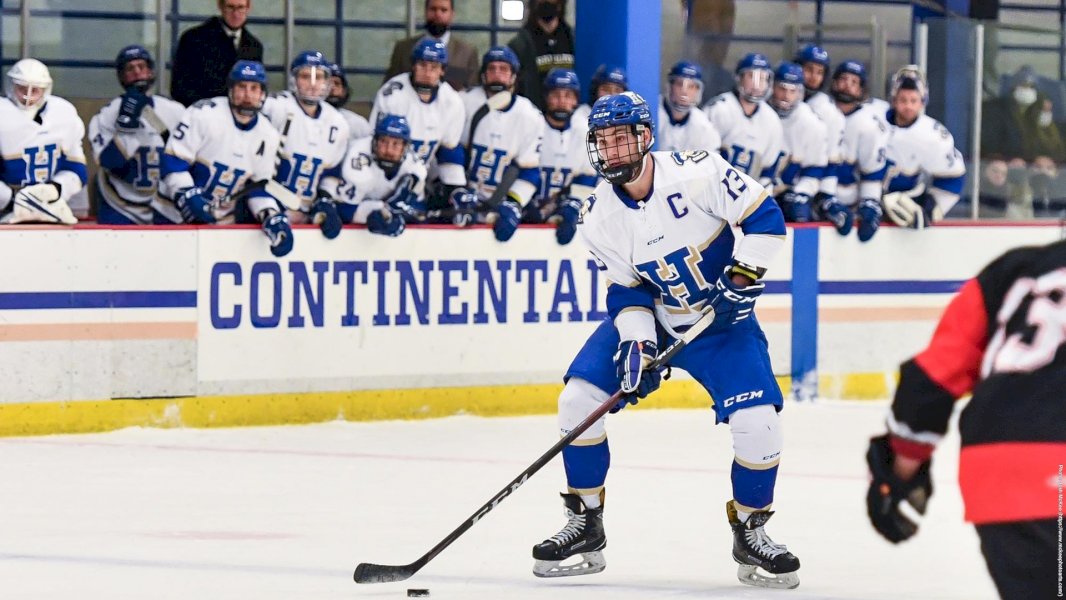 Hamilton College defenseman Nick Rutigliano ’22 scored one minute into sudden-victory overtime and the Continentals posted a 4-3 NESCAC win against the Tufts University Jumbos at Malden Valley Forum on Friday evening.

Hamilton moved back to .500 at 8-8-0 overall and 7-7 in the conference. The Continentals will travel to New London, Conn., to face NESCAC foe Connecticut College on Saturday, Feb. 12 at 3 p.m.

Sean Storr ’22 made 25 saves for the winners. Rutigliano was the only Hamilton player with multiple points as he finished with the game-winning goal and an assist.

Before the start of the extra period, Hamilton earned a power play and started overtime with a 4-on-3 advantage. The Continentals dominated puck possession and produced three shots until Rutigliano connected on a pass through traffic from James Philpott ’25. Rutigliano has five goals on the season and 10 points. Philpott leads the team with nine assists.

Hamilton struck first on a goal by Sean McAvoy ’23 seven minutes into the first period, the first of his career goal with the Continentals. Hamilton played aggressive on the defensive end as Ryan Brown ’25 produced an impressive block on a snap shot. The Continentals navigated the far side and moved through the neutral zone. After a Jumbos deflection, Rutigliano fired a shot and McAvoy followed with the rebound. Joey Moore ’22 was credited with an assist as well.

The Continentals extended their lead only 1:11 into the second period with a high slot goal by William Neault ’25 for his second this season. Scott McKenzie ’25 and Logan Greene ’24 had the assists. Tufts’ Aidan Lovett cut the deficit in half with his first career goal on a 2-on-1 at 6:10 in the second.

With only 12 seconds remaining in the period, Nick Hawkins ’23 netted his third goal of the season and gave Hamilton a 3-1 lead after he split the defense following an interception. Sean Thomson ’23 and Fred Allaire ’23 collected the assists.

Tufts pulled within one 3:35 into the third period on a goal by Tom Tresca. The Jumbos evened the score at 7:03 on a Fisher Shea goal after Justin Brandt set him up in front of the net.

Allaire won 15 of 21 faceoffs and McKenzie won 9 of 13 for the Continentals. Rutigliano hit the post with a shot about four minutes into the third period.