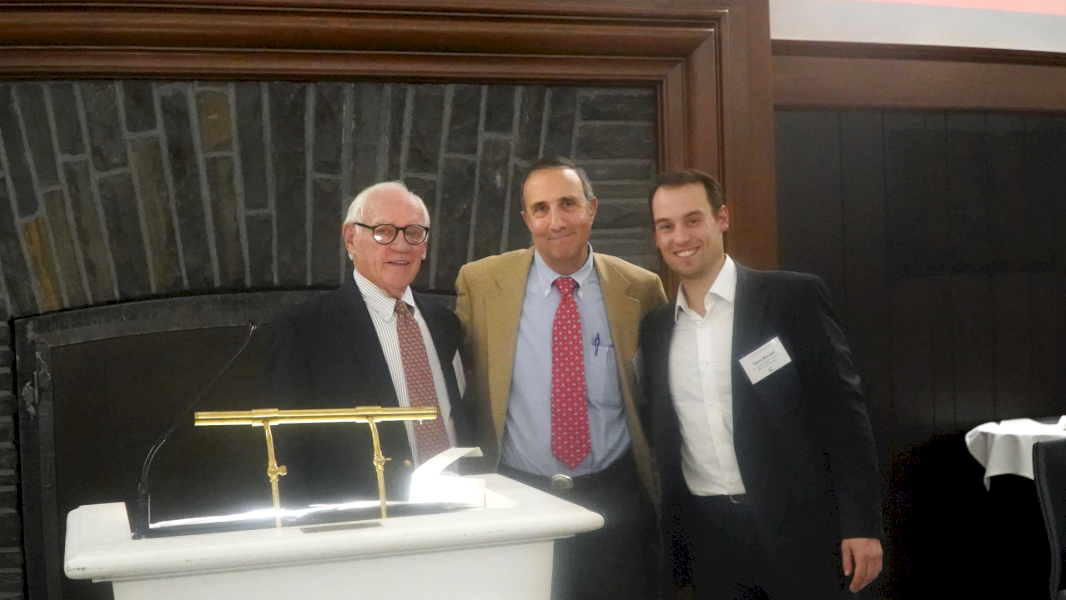 HAMILTON — Colgate Men’s Hockey held its bi-annual Silver Puck Weekend, welcoming its alumni back campus with a pair of games against Vermont. After a hiatus due to the pandemic, the event was held for the first time since 2019.

After this past Saturday’s game, the Silver Puck Club hosted its banquet in the University’s Hall of Presidents.

The Silver Puck Club is the team’s booster club that was founded in 1958. The club awards the Silver Puck Award to a person or persons whose continued support and contributions to the Colgate hockey program warrant special recognition and applause. The award is a silver-plated, puck-sized award weighing three pounds and is inscribed with the recipient’s name.

This year’s recipient was Colgate’s Vice President for Admission and Financial Aid, Gary Ross. He graduated from Colgate in 1977 and left the Chenango Valley, but only for a short while, returning in 1985. Ross has worked closely with Colgate Head Coach Don Vaughan for over 20 years, helping him to make some critical decisions within the program.

“I am proud of our working relationship, and I am even more proud to call him a friend,” Vaughan said. “He cares deeply about all our student-athletes, and that care does not end with the stroke of a pen, but long after they walk onto campus as a first year.”

The banquet also featured guest speaker Joe Mormina ’05. Mormina was a four-year member of the Colgate Hockey program during a time that saw the team record back-to-back 20-plus win seasons.

He was a member of the 2004-05 team that posted a 25-11-3 record and clinched a spot in the NCAA Tournament. The defenseman earned ECAC Hockey Second Team All-League honors during his senior season.

After his graduation, Mormina signed with the Los Angeles Kings AHL affiliate, the Manchester Monarchs. He then played for the Albany Rivercats, the Carolina Hurricanes affiliate, where he eventually got called up to the NHL. Mormina went on to play another nine seasons of hockey in the AHL, explaining his journey in his speech.

The banquet concluded with the tradition of singing the Colgate Alma Mater led by the team’s freshman.