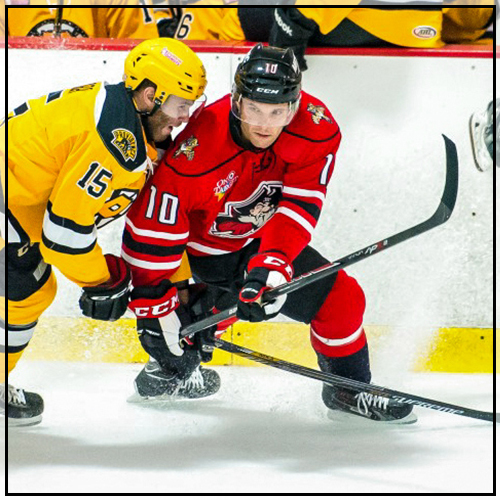 Rob Schremp announced his retirement from professional hockey in a statement posted across his social media accounts. Schremp was born in Fulton, NY and had a career that spanned over fifteen years while playing in multiple countries and leagues. It is always surreal to follow an individual from this area progress throughout his career. Seeing the places they go to chase their dream is always interesting to me. I decided to take a look back at Rob’s career and the places this journey took him over the past sixteen years.

He began his journey playing for the Syracuse Jr. Crunch in the old OPJHL with his brother Tyler, and some other familiar names including Tim Sestito and Ryan Callahan. Schremp recorded 171 points through 98 games with Syracuse.

In 2002 Schremp was drafted #1 overall by the Mississauga Ice Dogs of the Ontario Hockey League. His first season with Mississauga he won awards for Most Assists by a Rookie (48), Most Points by a Rookie (74) and Rookie of the Year. The next year, in 2003-04, Schremp played 3 games for the Ice Dogs before being traded to the London Knights where he would spend the next three seasons.

During the summer of 2004 Rob was selected by the Edmonton Oilers in the first round of the NHL Draft, 25th overall. He continued to play in the OHL and further develop as a player after being drafted by the Oilers.

He helped lead the Knights to an OHL Championship and Memorial Cup championship in 2004-05. He was also selected to represent the United States at the 2005 World Junior Championships in North Dakota where he scored four goals in seven games.

In 2005-06 Schremp scored 57 goals and 88 assists, good for 145 points in 57 regular season games. He went on to score 10 goals and record 37 assists in 19 playoff games as well. That year he was named to the CHL First All-Star Team as after leading the OHL in assists, goals, points, playoff assists and playoff points. London lost in the OHL championship to Peterborough that season. Schremp once again represented the USA at the World Junior Championships. He scored six points en route to a second consecutive 4th place finish.

Rob Schremp made his professional debut with the, then Edmonton American Hockey League affiliate, Wilkes-Barre Scranton Penguins in 2006-07. He put up 53 points in 69 games that season. He also made his NHL debut that year. On April 5, 2007 Schremp suited up for the Oilers and recorded 2 shots on goal while skating 14 minutes of ice time in a 3-0 loss against the Minnesota Wild.

Schremp spent most of his first three professional seasons playing in the AHL for the Penguins and Springfield Falcons. Springfield became the new Edmonton affiliate prior to the 2007-08 season. Over those first three season he recorded 47 goals and 124 assists in 216 AHL games. During that time Schremp was only able to crack the Edmonton lineup for 7 games where he managed to record 3 assists. Struggling to land a permanent roster spot with the Oilers, Schremp was placed on waivers after being cut from training camp in September 2009. Although disappointing at the time, the demotion was a blessing in disguise.

The New York Islanders claimed Schremp where he found a permanent NHL roster spot. Over the course of the next two seasons he went on to score 17 goals and 30 assists in 89 games. His first NHL goal was scored against the Boston Bruins on December 12, 2009.  Schremp was claimed off of waivers for the second time in his career in February 2011 by the Atlanta Thrashers. He finished out the 2010-11 season with Atlanta recording 4 points in 18 games. Atlanta was relocated to Winnipeg that off-season and Schremp was not offered a contract making him an unrestricted free agent.

That summer Schremp decided to take his talents to Europe and in August signed a deal with Modo Hockey in Sweden. As part of the top line, he contributed 41 points in 55 games to go along with 5 points in 6 playoff games. The following season Schremp signed a two-year contract with Dinamo Riga of the Kontinental Hockey League in Belarus. He struggled playing in the KHL and only recorded 6 points in 21 games before he left the team. He played one game with HK Liepājas Metalurgs of the Belarusian Extraleague before signing on with EC Red Bull Salzburg of the Austrian Hockey League for the remainder of the 2012-13 season. While with EC Red Bull he found his groove once again and amassed 9 goals and 27 assists in 26 games.

His journeyman career continued in 2013-14 this time signing a one-year deal with EV Zug of the Swiss National League A where he put up another 36 points. The following season he jumped to his seventh European team, Skellefteå AIK of the Swedish Hockey League. His offense began to slow down as he only managed 6 goals and 14 assists through the 42 game season.

Schremp returned to North America for the 2015-16 season after accepting a tryout with the Portland Pirates of the AHL. Schremp once again excelled during his time in the ‘A’ and led his team in points with 21 goals and 21 assists through 75 games. Despite having an excellent season with Portland, Schremp headed back over to Europe in 2016-17 playing again for the SCL Tigers. He previously played one game for the Tigers in 2013-14 while they were relegated to the Swiss National League B. This time around the Tigers were back in the National League A, the top Swiss league. At the end of January Schremp left the Tigers after piling up 27 points in 33 games and was immediately signed by the Thomas Sabo Ice Tigers of the DEL. The DEL is the top-tier league in Germany.

EC Red Bull Salzburg of the top Austrian League came calling during the summer of 2017 and Schremp signed a one-year deal to return to Salzburg. Schremp appeared in 36 games where his 47 points helped his team to the EBEL championship series. He also added 14 points during their 19 game playoff run.

Schremp may not have been an NHL superstar, but he worked his tail off to stay in the game for 16 seasons. He played in the top leagues in Austria, Belarus, Germany, North America, Sweden and Switzerland. After his “comeback” season in 2017-18 he had offers to continue playing (as he mentioned) but was finally content with starting a new career. I know I speak for everyone in the 315 when I say it was a pleasure watching him play while following his career all around the world. Whenever a local guy makes a name for himself in the professional ranks it always makes me proud to call this place home.