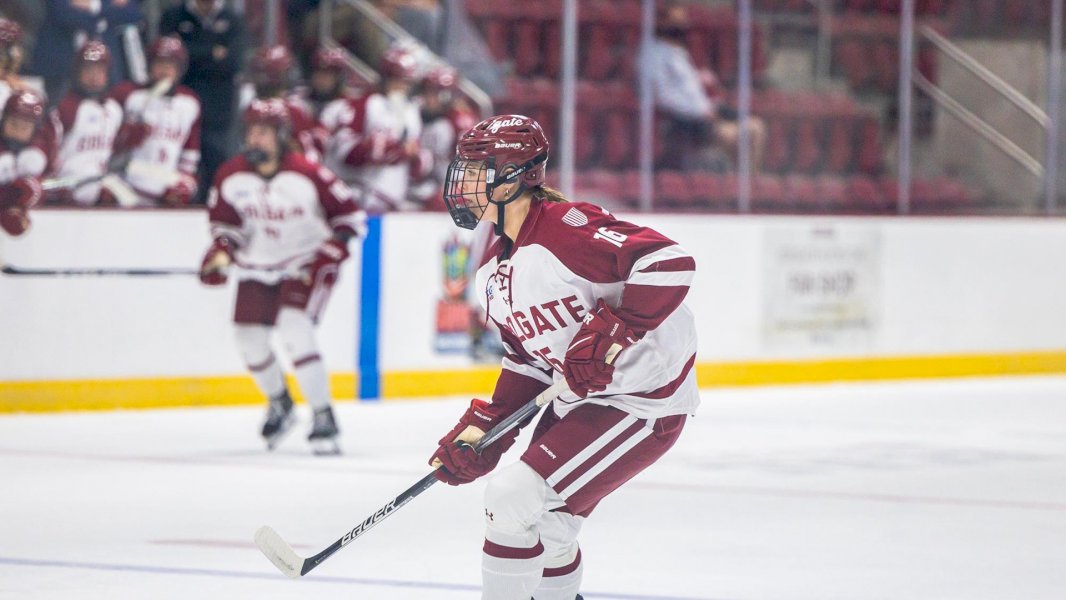 HAMILTON, N.Y.— The Colgate women’s hockey team scored three goals in the first nine minutes en route to a 7-1 win over Brown on Friday night in ECAC Hockey play at Class of 1965 Arena.

Colgate had 11 different skaters record points, led by Sydney Bard who had three off of three assists. Both MacKay sisters, Eleri and Delani, along with Kalty Kaltounkova, Kaitlyn O’Donohoe, Neena Brick, and Katie Chan also registered multiple points in the game with two a piece.

The Raiders outshot the Bears 44-12 on the night and took advantage of Brown’s penalties as they scored four power play goals.

The Bears had eight penalties and spent 9:31 in the box, while the Raiders had just four for a total box time of 4:05. Colgate was perfect in killing all four of the penalties that it faced.

Just two and half minutes into the game the Raiders scored their first goal on a connection between the two MacKay sisters. Eleri MacKay found Delani MacKay who skated in and ripped a shot into the net from the right faceoff circle. Just over two minutes later, Kaltounkova passed to Malia Schneider who scored to double the Raiders’ lead.

Shay Maloney then pulled one back for Brown to make it 3-1 with 10:03 remaining in the first.

Kaitlyn O’Donohoe ended the first period scoring with the first power play goal of the game as the Raiders took a three-goal lead into the first intermission.

All three of the Raiders’ goals in the second period also came off of power plays. O’Donohoe picked up where she left off, scoring just under six minutes into the period. Kaltounkova then notched her second goal of the game, followed by Danielle Serdachny topping off the scoring, as she found the back of the net with 1:15 remaining in the period.

Kayle Osborne had 11 saves in net for the Raiders as they improved to 11-2 overall and 3-0 in ECAC Hockey.

“I liked how we started the game the first ten minutes or so. I think our start really set the tone in this game. it was nice to get a couple of power play goals as well. Tomorrow will be a big test against a very good team in Yale.”

The Raiders host another conference game tomorrow when they face off against Yale at 3:00 p.m. Before the game, fans will be able to take photos with the ECAC Hockey Tournament trophy, celebrating last season’s championship.