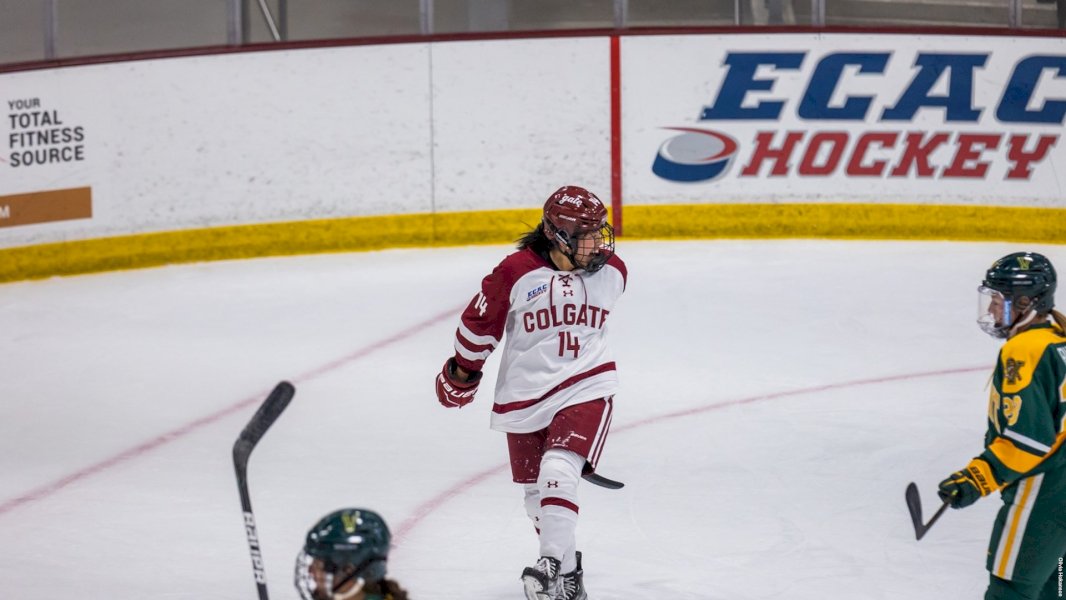 HAMILTON – Colgate Women’s Ice Hockey returned to the ice Friday, Oct. 21 for a faceoff against No. 14 Vermont in the Class of 1965 Arena. The Raiders walked away with the 4-1 win, bringing their record to 8-0.

Colgate conceded a goal midway through the first period but a redirection from Kas Betinol tied the game up. After Betinol’s goal, the Raiders ran away with the 4-1 win.

Kayle Osborne improves to 5-0 on the season, stopping 23 shots through three periods. Osborne’s win slides her into fourth all-time in career wins with 32.

The Raiders controlled the faceoff dot, winning 54 percent of the draws. Danielle Serdachny was 66.7 percent on faceoffs, winning six of nine draws.

Friday night’s affair got off to a quick start as Vermont slotted one past Osborne off a rebound from the point. The Raiders bounced back less than a minute later as Kas Betinol redirected a shot from Sara Stewart. Play continued with both teams tied at one.

With less than a minute to play in the first period Allyson Simpson rifled one over the shoulder of the Catamounts goalkeeper, Neena Brick and Ellysa Biederman collected assists on the go-ahead goal.

After a quiet second period, Danielle Serdachny got the ball rolling in the third period, scoring a wraparound goal to push the Raiders lead to 3-1. Kaitlyn O’Donohoe and Sydney Bard recorded apples on the goal.

Bricks tallied her second point of the night, scoring one on the breakaway, the Raiders led 4-1 until the final buzzer.

The Raiders return Saturday, Oct. 22 to finish out the weekend series with Vermont. Puck drop is set for 3:00 p.m.