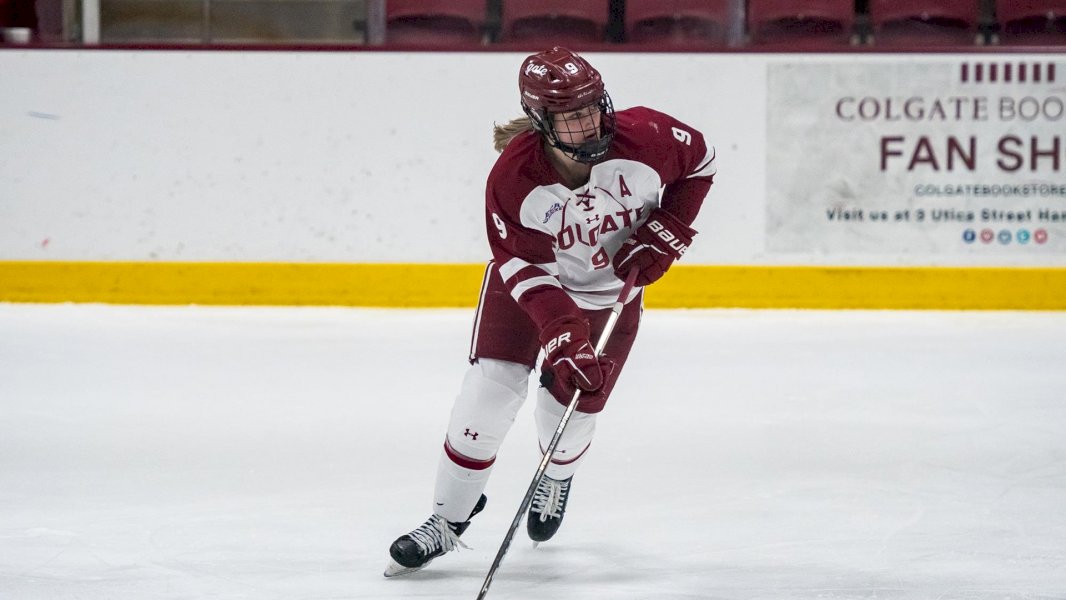 HAMILTON, N.Y.— Two goals from Kalty Kaltounkova helped No. 8 Colgate to a 3-2 win over Cornell on Tuesday evening at the Class of 1965 Arena.

Danielle Serdachny also had  three points, tallying a goal and two assists, one of which put her into the program record book.

The Big Red struck first as six and a half minutes into the game Leah MacSween picked up the puck in the Big Red’s offensive zone and then fired a shot past Hannah Murphy to put Cornell up 1-0.

Four minutes later, the Raiders tied the game up. Allyson Simpson passed to Serdachny who skated across the ice and around the net before finally dishing it to Kaltounkova who finished off a shot from in close.

Serdachny’s assist on the play was her 30th of the season which broke the team record for most assists in a season.

Cornell had three power-play chances in the first, all of which the Raiders were successful in killing off.

Colgate netted two more in the middle frame. It started with a goal from Serdachny when she stole the puck from a Big Red player then skated into the middle of the ice and fired a shot that hit off the glove of Cornell’s goalie and fell into the net.

Kaltounkova then scored her second of the game to make it 3-1 with 36 seconds remaining in the period. Serdachny found Kaitlyn O’Donohoe who played a centering pass to Kaltounkova for a shot that she ripped into the back of the net.

In the third, Cornell pulled back within one when Kaitlin Jockims scored on a power play four and a half minutes in.

The Raiders survived a multitude of shots at the end of the game after the Big Red pulled their goalie, as they hung on for the 3-2 win.

Colgate finished with a narrow advantage in shots at 28-26 as well as in the faceoff circle, going 33-62.

Murphy won her third straight game in goal with 24 saves.

“That was a really tough playoff-like game tonight with two teams that fought hard all night long.

Our special teams play was key tonight and we got some very important saves at the right times from Murph. We were focused on the right things as a group all night and you could see it on the ice and feel it on the bench. We really wanted this one as we’ve got our eyes on home ice in the playoffs and that is something within our own control at this point of the season. We’re going to rest up and get ready for the weekend ahead in the North Country.”

The Raiders head to the North Country for their final two games of the regular season. Colgate faces off against Clarkson at 6 p.m. on Friday and St. Lawrence at 3 p.m. on Saturday.