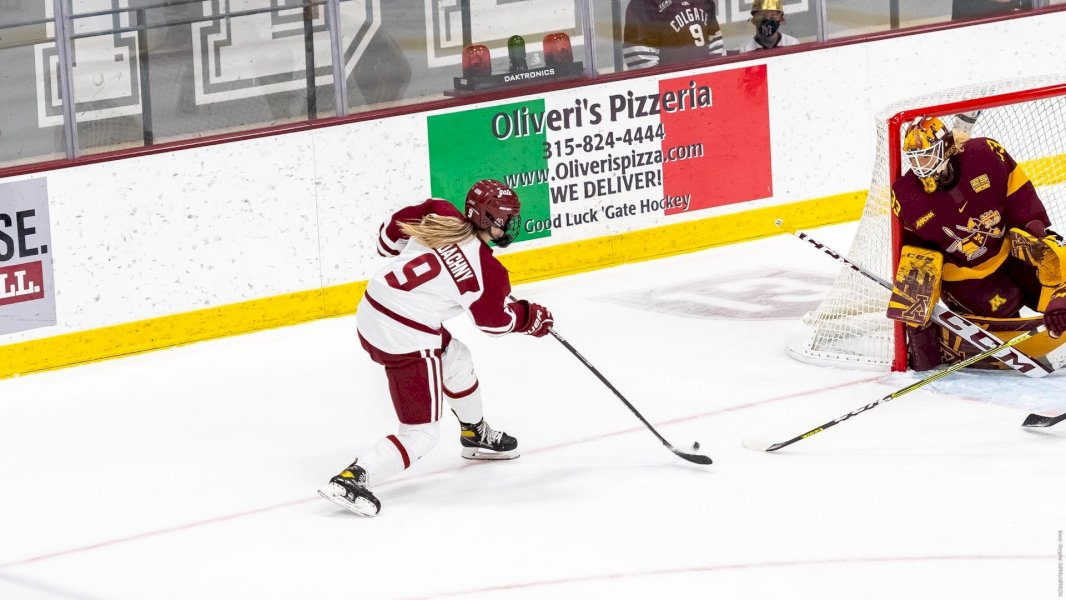 HAMILTON, N.Y.— A comeback effort by the Colgate women’s hockey team came up just short on Saturday as they fell 3-2 to No. 4/5 Minnesota.

Minnesota pulled ahead with 11:19 remaining in the first when Ella Huber found Emma Brown who put it in the back of the net.

Just over eight minutes into the second period the Gophers doubled their lead when Brown scored her second of the game.

Colgate was able to create some good chances in the second period but could not find the back of the net, such as when Kalty Kaltounkova was played one in front of the goal that she was unable to finish off

The Raiders were also able to prevent the Golden Gophers from increasing their lead thanks to some big stops by Kayle Osborne who had 31 saves in the game.

Just over a minute and a half into the third, Delani MacKay cut the lead to one after Kaitlyn O’Donohoe wrapped around the net and found her for a shot from in close.

Less than five minutes later, a loose puck in front of the net found its way in off the stick of Sydney Bard, as she tied the game at 2-2.

With 8:13 remaining Catie Skaja scored the Gopher’s go-ahead goal as they took a 3-2 lead.

“This was an exciting weekend of hockey here in Hamilton. Our crowd was fantastic and these were some exciting games.

We want a better outcome in the end, but I’m certain we’ll be able to look back at this weekend having learned a lot about ourselves and be able to take another step. We were able to dig in and fight our way back into today’s game in the third period, but we need to be able to bring that level of play from the start to be the team we want to be.”

The Raiders head to New England for a pair of games next weekend, starting with a 3:00 p.m. game at Dartmouth on Friday.