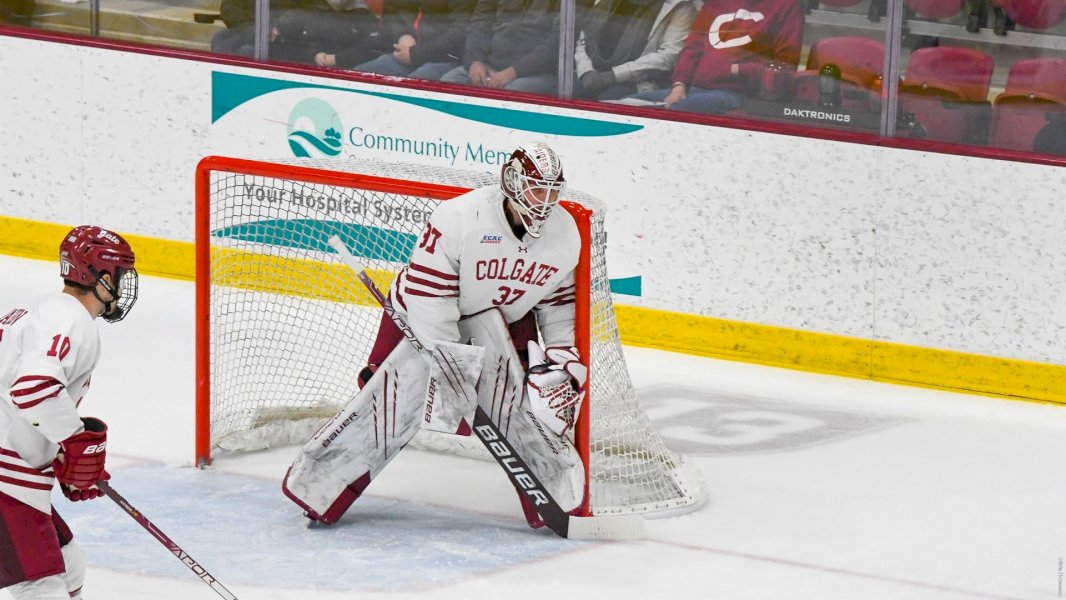 POTSDAM, N.Y.— Carter Gylander made 37 saves and Griffin Lunn scored an equalizing goal in the second period but that was not enough as Colgate fell 2-1 on the road to #19 Clarkson on Friday.

Gylander came out hot making 15 of those saves in the first period.

The Golden Knights got on the board first as just over six minutes into the game Brian Hurley took a shot that deflected off Gylander’s pads and trickled into the goal.

The Raiders equalized in the second period when Pierson Brandon found Lunn who one-timed a shot into the goal. Five minutes later, Alex Campbell scored for Clarkson to put the Golden Knights up 2-1.

Two of Colgate’s three power plays in the game came during the second period. The Raiders had two more in the third period, including with 44 seconds remaining in the game and the goalie pulled, although, they were unable to find an equalizer despite the two-man advantage.

Clarkson also had three power plays in the game, all of which the Raiders were successful in killing.

Colgate outshot the Golden Knights 25-15 in the final period but Clarkson ended up with the total advantage in the game at 37-27.

“It was a great college hockey game. Clarkson is a hard team to play against. They have a lot of older players and I thought we went toe to toe with them. In the end they found a way to score one more goal than we did. That’s hockey. I’m proud of this team tonight and the effort we put forward. This is a hard league and we will evaluate and make some adjustments and hit the reset button for a big game tomorrow against SLU.”

The Raiders finish their trip to the North Country with a 7 p.m. game at St. Lawrence tomorrow.