Raiders and Black Bears Skate to a 1-1 Draw 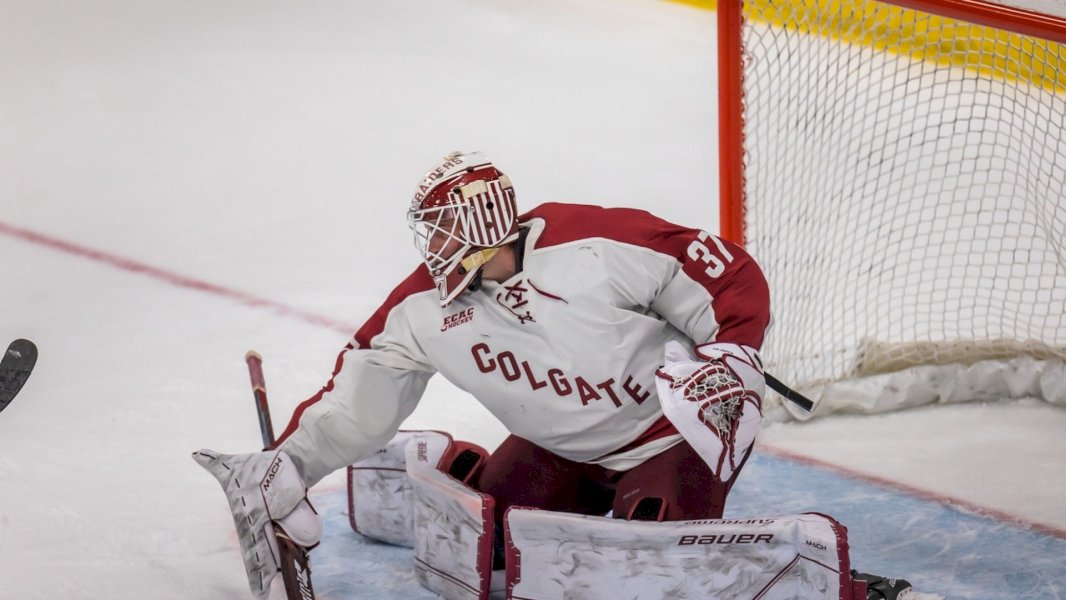 HAMILTON — Colgate and Maine played to a 1-1 tie at the Class of 1965 Arena Saturday.

Alex Young tied the game up with a power play goal with eight minutes remaining in the second. Matt Verboon played the puck to Nick Anderson, who dished it across the ice to Young for a shot he ripped into the back of the net.

Maine opened the scoring just over three minutes into the middle frame. Nolan Renwick tapped a loose puck to Dawson Bruneski, who skated down the ice on a breakaway and dished a pass to Didrick Henbran, who finished off a shot.

The game remained scoreless in the third. Carter Gylander made a few big stops in the final period to keep the Black Bears from pulling back ahead.

In overtime, Colgate had some good looks at the beginning of the period but could not quite put one in the net. Maine scored a goal in the extra period that got called off, so the teams played on.

The Raiders took the shootout 3-1 after Ethan Manderville, Alex Young, and Simon Labelle made their shootout attempts.

The beginning of the game saw no scoring action, as neither side could put one in during the opening period. Colgate held a slight edge in shots in the first at 12-8, and Gylander made eight stops. The junior netminder finished with 28 saves in the game.

The Raiders had a pair of power play chances in the first but could not capitalize on either. The first opportunity came a little under six minutes into the game when the Black Bears got called for tripping, and the other came at the 16:51 mark on a slashing call.

Colgate also killed off a Maine penalty in the opening period after Ryan McGuire got sent to the box for slashing. The Raiders went two-for-two on the penalty kill in the game.

Maine played a great game tonight. They responded like we knew they would. They played a hard game, especially in the first period. Carter made some very difficult saves and made them look relatively easy. He was very good tonight. I liked our response in the second period, and we created enough scoring chances to put one in. We had a couple of great looks on two clear breakaways, and Ryan McGuire hit a crossbar on a great shot. I am pleased with the effort this weekend and now it’s all ECAC Hockey the rest of the way. The battle for those top four spots in the standings is going to be crazy. Buckle up ECAC Hockey fans.

UP NEXT
Colgate returns to conference play next weekend, facing off against RPI Friday at 7 p.m. and Union Saturday at 4 p.m.

No. 13 women’s hockey scores six goals in win over No. 10 Elmira