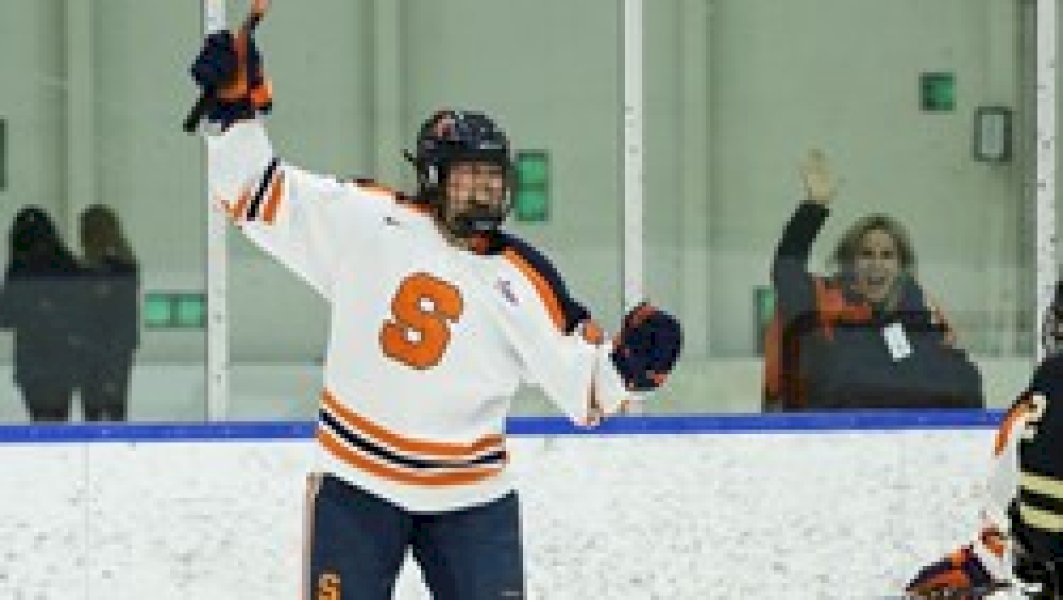 Sophomore Madison Primeau netted a hat-trick leading the Orange in a 4-1 win against Lindenwood on Friday at Tennity Ice Pavilion. The forward scored her first goal on a power play to give Syracuse (4-7-1 overall, 3-0 CHA) a 2-0 lead in the first period and then scored the final two goals of the game. Junior Sarah Thompson assisted on Primeau’s third and four goals.

“Madi has jumped lines early in the season and this week we had a good conversation about needing depth through our lines and she is someone who can add that on the third line. Obviously, we saw that tonight with her scoring three goals for us,” said head coach Britni Smith. “Tonight she was moving her feet and keeping her game simple. Two of her goals were rebounds so she is getting herself in position to find those pucks.

Syracuse and Lindenwood will play the second game in the series on Saturday at 3 pm at Tennity. All Orange fans are invited to celebrate Syracuse ice hockey’s 2022 College Hockey America Championship and welcome back the program’s alumni as part of the in-game experience.

In the first period, the Orange jumped out to a 2-0 lead on power play goals by junior Hannah Johnson and sophomore Madison Primeau. Freshman Rhèa Hicks assisted on each goal. Johnson scored less than five minutes into the game when she one-timed the rebound save off of Hicks’ shot into the right side of the goal. Primeau gave the Orange a two goal advantage with 22 seconds left in the opening period when she hustled to a loose puck that Hicks sent out in front of Lindenwood’s net and put a shot in the far right corner.

After Lindenwood (0-7, 0-3) cut the Syracuse lead to one, 2-1, early in the second period when Kaitlin Finnegan scored at the 4:35 mark, Primeau tallied her second goal of the game with four minutes remaining in the second period to give the Orange a 3-1 advantage. Junior Sarah Thompson centered a pass from the left goal line which Primeau controlled and then fired a shot from between the circles.

Four minutes into the third period, Primeau netted a hat-trick. Thompson carried the puck toward the goal and when the puck got loose Primeau was on the crease to put it in the back of the net to give the Orange a 4-1 lead. The Etobicoke, Ontario native has scored in back-to-back games and four of the last six contests. Tonight marks her first career hat-trick and second multi-goal game for the Orange. She scored a pair in Syracuse’s 6-1 win against Lindenwood last season.

The two assists are a career-high for Thompson, who has 10 helpers in her Syracuse career.

“Sarah was our most consistent player tonight,” Smith said. “I think she had the best game she has had all season. She does it the right way. She works hard. She is always doing the little things. I thought she led the way tonight.”

The 2021-22 Orange won the CHA regular season and conference tournament. The University will celebrate the team after Syracuse’s game against Lindenwood on Saturday, November 5th (3 pm, Cuse.com). Syracuse finished with an 11-4 league record to claim the first regular season CHA title in program history and earned the right to host the CHA Tournament. The Orange beat RIT in the semifinal, 3-2 in overtime to advance to the championship game and then defeated Mercyhurst, 3-2 in overtime in the championship game in front of a sellout crowd Tennity Ice Pavilion. Forward Sarah Thompson scored the game-winner for the title by gathering a rebound off of a shot by Jessica DiGirolamo and burying it into the back of the net at the 7:32 mark in the extra session.