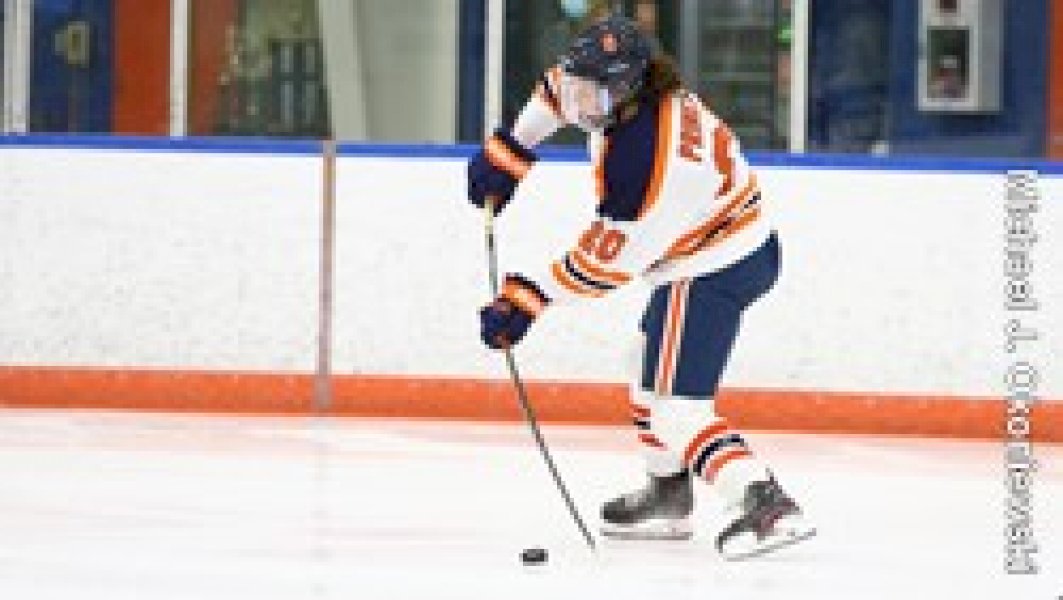 SYRACUSE, N.Y. — Syracuse freshman Madison Primeau extended her streak of games with a goal to three when she put the Orange on the scoreboard less than two minutes into the game against #3 Colgate on Saturday at Tennity Ice Pavilion. Primeau took a pass from graduate student Victoria Klimek and fired the shot in the top left corner for Syracuse’s (1-4-2 overall) first goal to tie the game, 1-1. Colgate (8-0) won the game, 5-2.

“I thought we had a lot more energy and a had better focus in a lot of areas today compared to our game at Colgate on Thursday,” said head coach Paul Flanagan. “They are a real good team, probably one of the top teams in the East. I thought it was a good sign today that we kept battling to the final whistle. Now we have to make sure we take care of our bodies and do a good job with preparation as we begin CHA play out at Lindenwood on Friday.”

Colgate’s Kalty Kaltounkova opened the scoring with a goal 50 seconds into the game. Primeau tied the score at one less than a minute later. The Raiders took a 2-1 lead with 6:13 left in the opening period when Katie Chan scored on a power play.

In the second period, after Colgate extended the lead to 3-1 on a goal by Delani MacKay, Orange junior Anna Leschyshyn scored the second Syracuse goal. Primeau fed Leschyshyn at the top of the circle and Leschyshyn put the shot in the top left corner of the net to cut the Colgate advantage to one, 3-2, with 4:36 left in the period. Less than 30 seconds later, Danielle Serdachny gave the Raiders a two-goal advantage, 4-2. Colgate’s Neena Brick added a fifth goal in the third period.