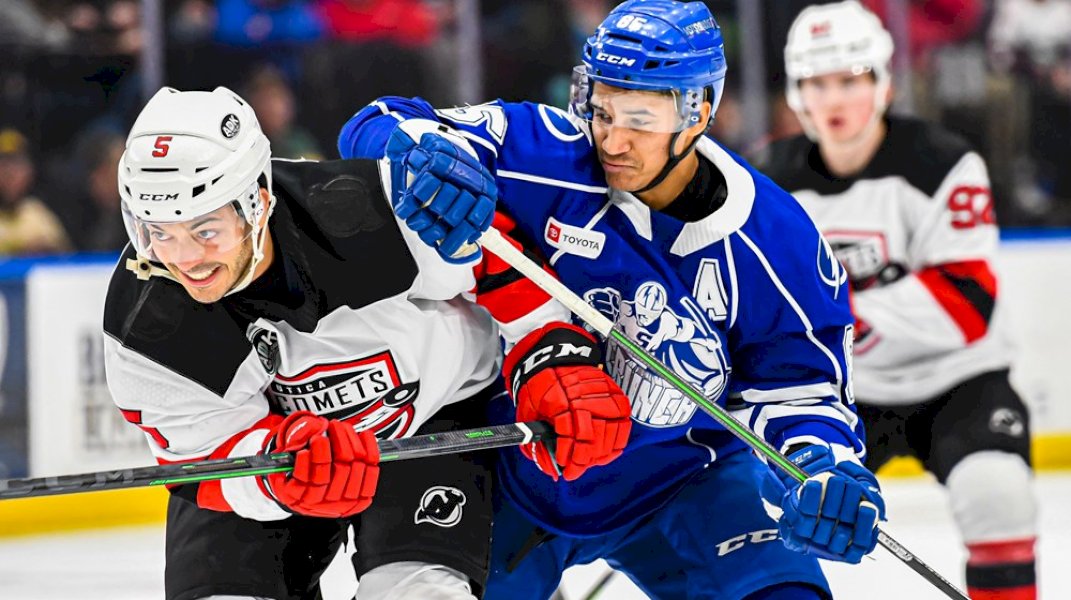 The Crunch play the first game of their two-game preseason slate tonight against the Utica Comets at the Adirondack Bank Center. It’s the first of two exhibition games for both teams.

Syracuse will wrap up its preseason schedule tomorrow at home against the Rochester Americans; Utica will travel to Rochester on Sunday.

The Crunch and Comets are in line for 14 regular season head-to-head matches; Utica won 11 of the 14 matches last season.

The Crunch finished the 2021-22 season with a 41-26-7-2 record, good for a 0.599 points percentage. Syracuse caught fire in the second half of the season and rallied from outside of a playoff position as late as mid-March to surge up to second place in the North Division by season’s end.

The Crunch fell to the Laval Rocket in five games during the North Division Semifinals.

Out of the 27 players, 17 skated in at least one game for the Crunch during the 2021-22 season. They return the goalie tandem of Max Lagace and Hugo Alnefelt. Lagace dealt with injuries at the start of the season, but he was at the top of his game down the stretch, finishing with a 23-9-2 record with a 2.31 goals-against average and a .910 save percentage. He earned AHL Goaltender of the Month in April after posting a 9-1-1 record in 11 starts to close the season.

The Crunch also return their top goal scorer (30) in captain Gabriel Dumont, three of their top four scorers with Alex Barré-Boulet (63), Gabriel Dumont (62) and Sean Day (40) and the rock of their blueline in Darren Raddysh.

With 17 returners, that still leaves 10 players who did not skate for the Crunch last season. The majority of the turnover is comprised of rookies.

On defense, veteran Trevor Carrick, who spent last season with the San Diego Gulls, arrives to bolster a blueline that also adds rookies Jack Thompson and Tyson Feist. Thompson, 20, was selected in the third round of the 2020 NHL Draft by the Lightning; he skated in one game for the Crunch in the 2020-21 season.

Among the forward group, the Crunch have added rookies Bennett MacArthur, Lucas Edmonds and Jack Finley. Félix Robert joins the organization after two seasons with the Wilkes-Barre/Scranton Penguins. Grant Mismash arrives after being acquired by the Lightning in an offseason trade with Nashville. Undrafted free agent Ilya Usau was signed to an entry-level contract by the Lightning in March.

The Comets captured their second division title in franchise history last season, posting a 43-20-8-1 record. The 2021-22 season marked the Comets first as an affiliate of the New Jersey Devils.

The Comets’ current roster heading into tonight’s preseason opener features nine players who appeared in a game for Utica last season. Defenseman Robbie Russo had the most points, 35, among players on tonight’s roster who played for the Comets last season.

The Crunch’s coaching staff remains in place for a fourth consecutive season. Ben Groulx returns for his seventh season at the helm; he is the all-time leader in wins in Crunch history with 221 wins. In his first six seasons, Groulx has compiled a 221-126-28-23 record, good for a 0.619 points percentage. The Crunch have made the playoffs all four seasons that the Calder Cup Playoffs have been held while Groulx has served as head coach.

Assistant coaches Gilles Bouchard and Eric Veilleux are back behind the Crunch bench for their fifth and fourth seasons respectively. Goaltending and video coach Joe Palmer is also back for his fourth season with the team.

The 2022-23 season marks the Crunch’s 11th season as the American Hockey League affiliate of the Tampa Bay Lightning. It is now the longest the Crunch have served as an affiliate for an NHL partner, surpassing the 10 seasons the Crunch were the affiliate for the Columbus Blue Jackets (2000-10).

The Crunch are 368-234-59-41 during their time with the Lightning. Their 0.595 points percentage in that time is the best they’ve had with an NHL partner. They are just six wins shy of matching the 374 they totaled in 10 seasons with Columbus; those 374 wins came over 800 games versus the 702 games it has taken to reach 368 wins with the Bolts.