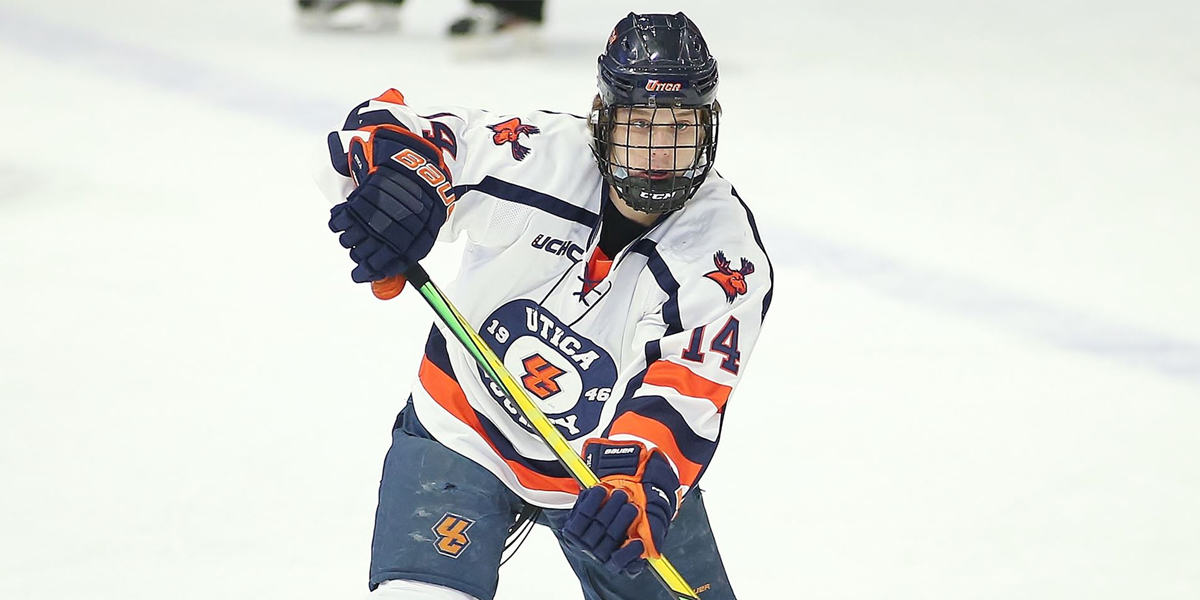 All the Utica College Pioneers Men’s hockey team needed to do in order to win their fifth straight regular season UCHC title on Saturday afternoon was win in regulation against Neumann University. They easily attained this and will be the top seed in the UCHC Tournament. Even though they only played eight games in this crazy COVID season, they earned 21 points; edging out Stevenson’s 20 points in the standings.  The Pioneers proved that last year’s dream season was no fluke. Despite very physical play from the Neumann University Knights, the Pioneers blanked them 6-0 in Aston, Pennsylvania.

Senior center, Jamie Bucell (Philadelphia) started the Pioneers’ scoring spree at 7:16. Regen Cavanagh (Sioux Falls Stampede) found an open Bucell who lit the lamp. Bucell would be the tac in the tic-tac-toe power play goal at 14:05. Justin Allen (Rochester Monarchs) was the tic and Brett Everson (Hawkesbury) was the toe in the slot to double the Pioneers’ lead.

Neither team took their feet off the accelerator for the second period. It was Allen who got the give and go going for Jayson Dubay (Youngstown Phantoms) and Brendon Schultz (Topeka) for the third Pioneer goal at 8:40. Allen’s magic touch continued for his third assist of the night on a power play goal at 17:30. He passed it to Cavanagh, who found the big guy, Buster Larsson (Syracuse Stars), at the top of the circle. Larsson’s rocket shot went over the shoulder of the Knight’s goalie, Cal Ambrose (Hudson Havoc).

The only short handed goal of the night went to Nick Yzaguirre (Charlotte Rush). At 3:11 in the third period, Conor Landrigan (Binghamton Jr. Sens) found Yzaguirre in their own zone, who powered along the boards and into the slot in Neumann’s zone. Bucell added a bookend goal at 13:52 to make it 6-0. On a 4 on 4, Bucell found his wheels into the Knight’s zone. That was the end of Ambrose’s night. He left the game with 17 saves. Kyle Pantalone (New York Apple Core) stopped all five shots he faced between the pipes.

UC will be the top seed in the UCHC Championship Tournament. Their opponent is yet to be determined, but the seeding ensures home ice for the Pioneers.