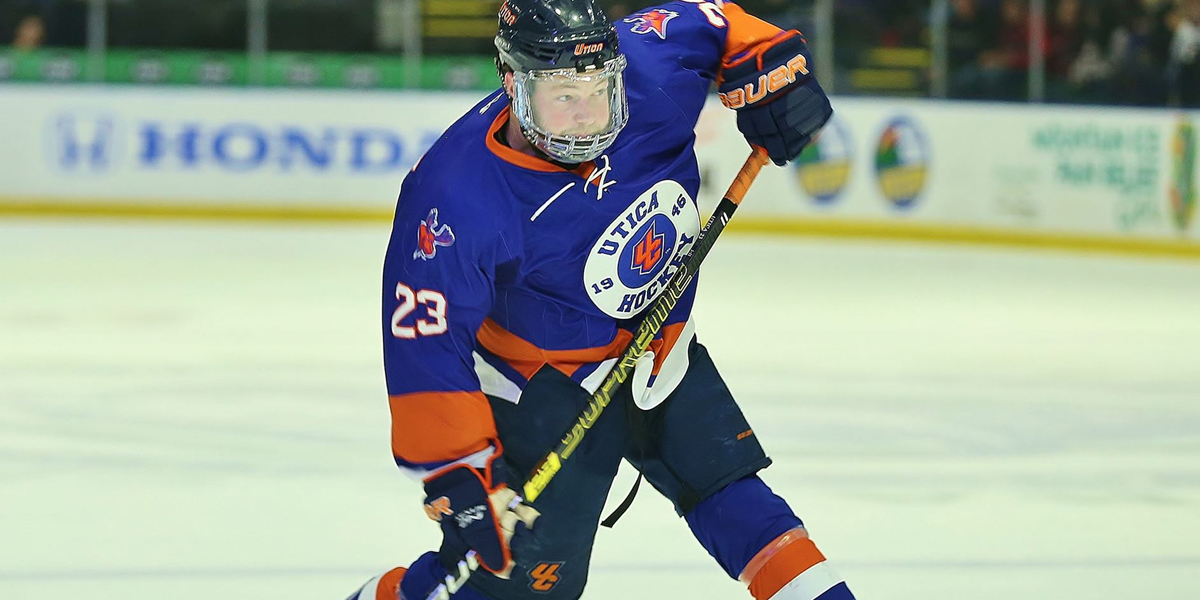 While most college hockey teams are still brushing off the rust from the holiday break, Gary Heenan’s #11 Utica College Pioneers (8-2-2) took down #7 Adrian College Bulldogs (8-3-1) in front of a hostile crowd.

The first period belonged to the Bulldogs. At 6:29 Rex Moe (Odessa Jackalopes) tipped it in past Utica’s goalie, Gianluca Baggetta (North York). It was Baggetta’s first game since he had to leave the November 29th game against Plymouth State due to an injury. Alessio Luciani (Markham Royals) and Brandon Marinelli (Nanaimo Clippers) were credited with the assists. For the next Adrian goal, Luciani and Marinelli teamed up again to feed the puck to Dino Balsamo (Aston Rebels), who made it 2-0 for Adrian at 16:04.

The Pioneers were able to tie things up in the second period. Tyler Pietrowski (Odessa Jackalopes) gained control of the puck and was able to send it up to Vaden McManus (Hampton Roads Whalers). McManus got it to Donovan Ott (RPI), who once again danced around a defender to hit the back of the net at 4:06. Freshman and DIII national points leader, Brandon Osmundson (Hampton Roads Whalers) fed the puck to the Land Dragon himself, Conor Landrigan (Binghamton Jr. Sens). He hit a rocket over the shoulder of Adrian goalie, Cameron Gray (St. Lawrence) to tie it at two at 7:00.

“Insane” doesn’t even begin to describe the third period of this game. Adrian came out of the locker room hot; scoring at :46. Andrew Bellant (Michigan Tech) took advantage of a rebound from Matts Eller (Austin Bruins) and McNair (Okotoks Oilers). Joey Colatarci (Summerside Capitals) scored what appeared to be the nail in the coffin for Utica at 4:41. Luciani was credited with his third assist of the night on the 4-2 goal.

Kasper Kjellkvist (Curry College) was the hero for the Pioneers. He lit the lamp just 12 seconds later to bring Utica within one. Regen Cavanagh (Sioux Falls Stampede) and Eric Holland (Brockville Braves) were credited with the assists. It was Kjellkvist again at 8:27 with assists from Nick Yzaguirre (Charlotte Rush) and Cameron Bartkowski (Amarillo Bulls) to tie it at fouir. At 12:40, Osmundson scored to put the Pioneers ahead 5-4. Landrigan and Tyler Dill (Charlotte Rush) assisted.

The Bulldogs fought back and tied it at 14:18. Bellant and Sam Ruffin (University of Alaska at Fairbanks) got the puck to a relentless Zachary Heintz (Lone Star Brahmas). The teams then traded goals in the last minute of regulation to send it into overtime. At 19:08, McManus took the feed from Osmundson and senior Daniel Fritz (Canisius College) and fired it in. Adrian pulled Gray for the extra attacker; and it worked. At 19:53, Ruffin and Balsamo got the puck in front of Baggetta and McNair slammed it over the goal line to tie it at six.

Even though overtime was short, it didn’t disappoint. While Landrigan was in the box for cross-checking, the penalty kill team of the Pioneers were able to get the short-handed score for the win. Justin Allen (Rochester Monarchs) and McManus controlled the puck and got it to Cavanagh for the game winning goal at 1:51. It is the first time that the Utica College Pioneers have defeated the Adrian Bulldogs. Baggetta had 33 saves in his return between the pipes and Gray had 16 saves.

If you are ever in a do or die situation, you want Regen Cavanagh on your team. For the second consecutive night, Cavanagh (Sioux Falls Stampede) scored the game winner in overtime to lift the #11 Utica College Pioneers (9-2-2) over the #7 Adrian College Bulldogs (8-4-1). This completed the weekend road trip sweep for the Pioneers.

In a replay of the previous night, Adrian took an early lead in the first period. Brandon Marinelli (Nanaimo Clippers) sent the puck to Rex Moe (Odessa Jackalopes) who sent it to Joey Colatarci (Summerside Capitals) at the point. Colatarci ripped a shot from the blue line past Utica’s goalie, Gianluca Baggetta (North York) at 11:34. Less than a minute later, Sam Ruffin (University of Alaska at Fairbanks) poked it past Baggetta because he didn’t know the puck was behind him. Zachary Heintz (Lone Star Brahmas) and Andrew Bellant (Michigan Tech) were credited with the assists.

The Bulldogs didn’t waste anytime in the second period. During a four on four, Marinelli fed the puck to Heintz, who backhanded it to Ruffin, who scored his second goal of the night at :15. The Pioneers got on the board on a power play at 8:32. Cavanagh passed the puck to Brandon Osmundson (Hampton Roads Whalers) whose shot was blocked by the Bulldog’s goalie, Nic Tallarico (Hearst Lumberjacks). Tyler Dill (Charlotte Rush) got the rebound and lifted it past Tallarico. Utica continued its scoring run at 13:38. Daniel Fritz (Canisius College) shot from the blue line up to Justin Allen (Rochester Monarchs). Allen’s shot was rebounded into the goal by Cavanagh.

The Pioneers tied it up at three when on a power play, Dante Zapata (Austin Bruins) passed it to Rome, NY native, Joey Rutkowski (Smith Falls Bears). Rutkowski got the puck to Syracuse Stars alumni, Buster Larsson, who plays defense on the power play. Larsson fired it from the blue line and past Tallarico at 17:42.

A scoreless third period meant another overtime. And another overtime, meant Cavanagh to the rescue. Fritz sent a shot in from the blue line. Kasper Kjellkvist (Curry College) caught it and sent it to Cavanagh; who then scored to end the game with just 1:05 in overtime. Baggetta ended the night with 27 saves and Tallarico had 12 saves.

The Pioneers continue non-conference play when they travel to Oswego State on Friday, January 10th. Puck drop is scheduled for 7pm.