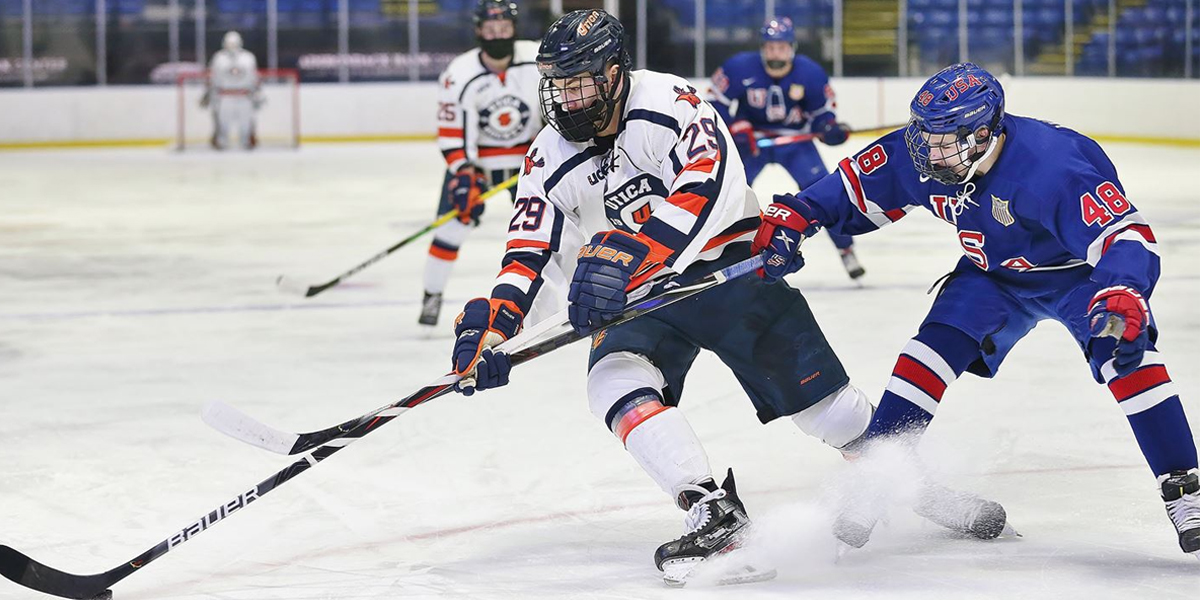 If there are no fans in the arena, will a hockey player know when to shoot? Based on the action in the Adirondack Bank Center at the Utica Memorial Auditorium Thursday and Friday nights, the answer is a resounding “Yes!”  After almost a year in the suspension of play due to COVID-19, the Utica College Pioneers took to the ice in exhibition play against the US National Under 17 Team. Each team took home a win.

The Pioneers hit the ice for its 20th season with a new banner hanging in the rafters of the ADK Bank Center. Coach Gary Heenan, also starting his 20th season as head coach, guided his team to its second UCHC Championship and its second bid to the NCAA DIII Tournament for the 2019-20 season. This was not the first time the Pioneers have played a team from the National Team Development Program (NTDP).

For those readers new to hockey, the NTDP was founded by the USA Hockey Foundation in 1996. Its roots are based in Michigan and has two squads: Under 18 (U18) and Under 17 (U17). The team is a member of the United States Hockey League (USHL) during a regular season. The majority of the players from these squads go on to represent Team USA in the IIHF, Olympics and NHL. The players are from all around the county. The 315 is represented by Seamus Powell of Marcellus who last played for the Rochester Selects 150. The U17 team was coming off of a road win against the Muskegon Lumberjacks

Many UC fans were disappointed that the live stream of Thursday night’s game  was not working and had to watch the play by play feed for the first period.  Both teams hit the ice ready to play and scored a combined five goals. Dante Zapata (Austin Bruins) was able to take advantage of the power play at 2:09. He was assisted by fellow sophomore John Moncovich (Hampton Roads Whalers) and freshmen Jayson Dobay (Youngstown Phantoms). Dobay also assisted on the next UC goal at 4:13 scored by Jamie Bucell (Philadelphia). Nick Yzaguirre (Charlotte Rush) also assisted in doubling the Pioneers’ lead. Team USA got on the scoreboard at 10:37 when University of Minnesota-Duluth commit Isaac Howard got it past UC goalie Sean Dickson (Hampton Roads Whalers) with an assist from Boston College commit Charlie Leddy. At 14:12, Buster Larsson (Syracuse Stars) put UC’s lead back to two with assists from Zapata and senior Brett Everson (Hawkesbury). Howard was not about to let the Pioneers go to the locker room with a two goal lead. He scored his second of the night at 19:47 with assists from Harvard commit Marek Hejduk and University of Michigan commit Frank Nazar III.

By the start of the second period the live stream was working, but both teams’ focus was on defense. The future member of the Fighting Irish, Maddox Fleming tied the game at three with assists from Roman Schmidt and University of Minnesota commit Cruz Lucius at 11:22. The Pioneers retook the lead with freshman defenseman Blake Holmes (Minnesota Wilderness)  taking a shot in front of the net at 14:38 to score his first goal as a Pioneer. He was assisted by juniors Eric Holland (Brockville Braves) and Regen Cavanagh (Sioux Falls Stampede).

Both teams switched up their goalies for Friday night’s rematch. Sophomore Joseph Giacobbo (Rockland Nationals) was in between the pipes for Utica while Kaidan Mbereko defended Team USA’s net.

Even though the Pioneers had many quick shots in the first period, none of them hit the back of the net and the teams ended the period scoreless.

The first goal came from Team USA’s Casey at 5:20 just as UC’s penalty of too many men on the ice was coming to an end. The Pioneers penalty kill team put much more pressure on Team USA to keep them scoreless for the next three power plays. Team USA was able to keep it in the offensive zone for most of the period, but UC kept the deficit to only one heading into the second intermission.

The lack of a normal season for the Pioneers showed its effects in the third period. Team USA, who has been playing games since October, was in better condition for a second game on a consecutive night. There was much more play in the neutral zone. UC was able to get off eight shots in the third. Lucius increased Team USA’s lead to two on his own rebound with assists from Hejduk and Charlie Stramel (Rosemount High School, MN) at 7:39. This goal caught UC on its heels because less than 30 seconds later, Ryan Chesley, a University of Minnesota commit, and Lucius assisted Fleming on a quick entry into the Pioneers’ zone resulting in the third goal for Team USA. Giacobbo lost his stick and was unable to get back in position. He would have 36 saves on the night. The Pioneers went big by pulling Giacobbo with 5:33 left in the game, but he had to go back when Dobay was called for elbowing at 15:14. The net was empty again at :11 when Team USA was called for a hooking penalty. The Pioneers were not able to take advantage of the sixth man and Mbereko earned a shutout with 26 saves.

Since these were exhibition games, the results do not count toward either team’s record.

The regular season and conference schedule begins on the road for Utica on Friday, February 19th at 6:45 PM. The Pioneers take on the last team they played for the 19-20 season, Wilkes University. Utica will host the following day for a 7 p.m. puck drop.