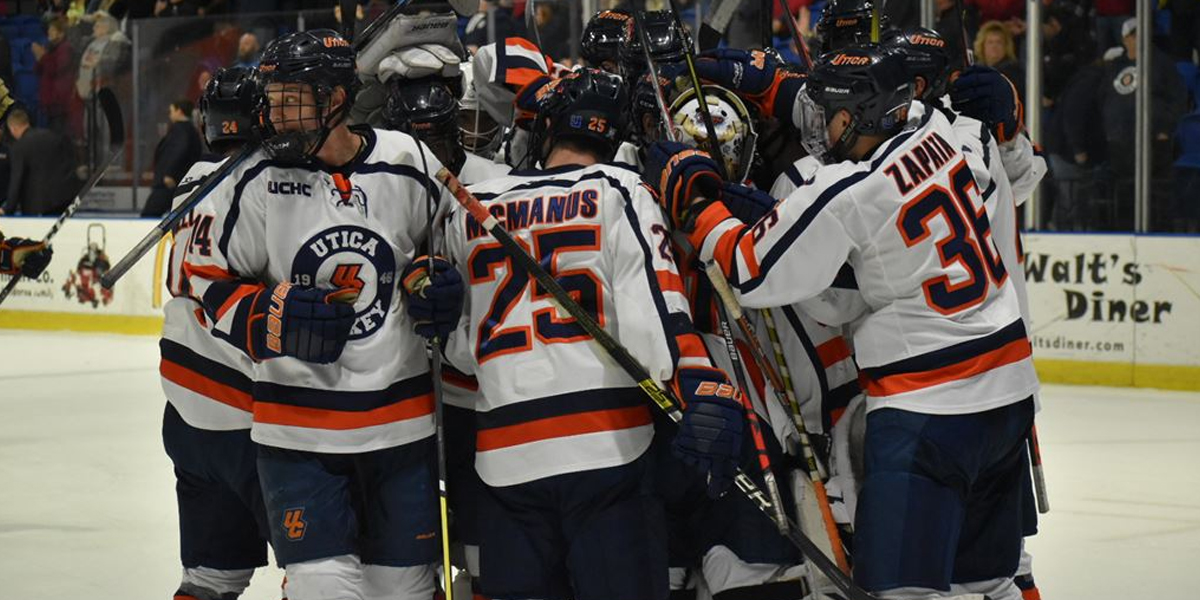 The Adirondack Bank Center is located in the USA, but Friday night belonged to Holland, Eric Holland, as the #3 Utica College Pioneers (19-2-2, 13-2-1 UCHC) shut out the Monarchs of Kings College (2-20-1, 1-14-1 UCHC) 9-0. The PIoneers increased their program’s winning streak to fifteen.

Gary Heenan’s team battled hard in the first period. Regen Cavanagh (Sioux Falls Stampede) fired a shot so hot at 6:02 that Kings’ goalie, Tyler Sayger (Rochester Monarchs) couldn’t keep it under control. He could only watch as it crossed the goal line behind him. Daniel Fritz (Canisius College) and Vaden McManus (Hampton Roads Whalers) received credit for the assists. Three minutes later, Conor Landrigan (Binghamton Jr. Sens) got one past Sayger with the feed from former Hampton Roads Whalers, John Moncovich and Brandon Osmundson. At 17:09, Justin Allen (Rochester Monarchs) and Brett Everson (Hawkesbury) passed the puck around the offensive zone and found Buster Larsson (Syracuse Stars) at the blue line. His rocket flew into the back of the net to make it 3-0 for the Pioneers.

The second period is when Eric Holland (Brockville Braves) began his four point night. Defenseman McManus found his captain, Jarrod Fitzpatrick (Northern Cyclones), who found Holland in the neutral zone. Holland entered the Monarchs’ zone and sniped a shot over Sayger’s right shoulder at :17. Ninety seconds later, Dante Zapata (Austin Bruins) won the faceoff, got the puck to Fitzpatrick, who fed it to Holland for his second sniper attack of the night. Kings’ head coach, Stephen Mallaro, pulled Sayger and replaced him with another freshman, Eric Daniel (Carolina Eagles). Sayger ended his night with 20 saves. It took a few minutes for the Pioneers to score on Daniel, but at 7:16, Moncovich, Osmundson and Landrigan performed a beautiful tic-tac-toe play that made it 6-0. To make it 7-0 at 17:26, Cavanagh passed it up to Donovan Ott (RPI) who found a net charging Kasper Kjellkvist (Curry College). Kjellkvist banked the shot off of Daniel’s back and into the net.

At 7:05 in the third period is when Holland earned his natural hat trick. Everson and Larsson passed it around the Monarchs’ zone until Larsson found Holland wide open. Holland faked out the goalie to go left and easily pushed it into the open side of the net. Holland earned his fourth point of the night on an assist for Zapata’s five hole shot at 15:56. Kjellkvist was credited with the secondary assist. Daniel would end the night with 27 saves.

The lack of offense from the Monarchs allowed three of the Pioneers’ goalies to each play a period. Gianluca Baggetta (North York) continued his hot streak. He saved the only shot that came his way in the first period. Joseph Giacobbo (Rockland Nationals) made four saves in the second period and Sean Dickson (Hampton Roads Whalers) saved all seven shots in the third.

The fans of #3 Utica College Pioneers men’s hockey team remained faithful and packed the Adirondack Bank Center on Saturday night to support their team as it took on #13 Wilkes University Colonels for the UCHC championship. The Pioneers didn’t disappoint and won 5-1 to earn their third consecutive regular season UCHC title.

The Pioneers came to win. Within the first two minutes, Donovan Ott (RPI) began a charge into the Colonel’s’ zone. He found the tape of Kasper Kjellkvist’s (Curry College) stick, who pushed it up to a charging Regen Cavanagh (Sioux Falls Stampede). Cavangah’s first shot was kick saved by Baldwinsville, NY native and Wilkes’ goalie, Michael Paterson-Jones (Charlotte Rush). Cavanagh caught his own rebound and lit the lamp at 2:02. With a title on the line, both teams went back and forth in the first period. Utica took a 1-0 lead into the locker room at the first intermission.

The second period was also all Pioneers. Justin Allen (Rochester Monarchs) freed the puck out of the Pioneers’ zone and found Rome, NY native, Joey Rutkowski (Smith Falls Bears) in the Colonels’ zone. While Rutkowski handled the puck, senior captain, Jarrod Fitzpatrick (Northern Cyclones) checked a Colonel into the boards. Nick Fea (New Jersey Rockets) swept Fitzpatrick’s feet out from under him in a move from the Tik Tok Skull Breaker Challenge to earn a penalty. During the delayed penalty call, Gary Heenan pulled Gianluca Baggetta (North York) for the extra attacker. Fitzpatrick got back to his feet and made a statement with a top shelf line drive at 6:05 to double the Pioneers’ lead. Brandon Osmundson (Hampton Roads Whalers), Eric Holland (Brockville Braves) and Buster Larsson (Syracuse Stars) created confusion in front of Paterson-Jones. It was Larsson who slipped it over the goal line at 7:54. At 16:27, Daniel Fritz proved why he is the team’s leader in power play goals. Ott and Conor Landrigan (Binghamton Junior Sens) passed the puck around the Colonels’ box defense and found Fritz inside the blue line, whose shot found the back of the net.

The Pioneers made a statement :15 into the third period when Holland snuck it past Paterson-Jones. Fitzpatrick and Dante Zapata (Austin Bears) were credited with the assists. Wilkes did not give up and at 1:39, Division III’s leading goal scorer, Donald Flynn (New Jersey Rockets), got one past Baggetta. That was the only one that got behind Baggetta, who ended his night with 27 saves. Paterson-Jones earned 31 saves for his team. The Pioneers have swept the regular season series with Wilkes for the second consecutive year.

The 2019-20 edition of the Utica College Pioneers has earned very impressive numbers. It is their fourth consecutive year conference regular season championship: three UCHC and one ECAC West before that. They are first in their conference with 46 points. With a regular season record of 21-2-2, they are now in a three way tie for most wins in the program with teams from the 2012-13 and 2017-18 seasons.

Saturday night’s victory was their sixteenth consecutive win of the season. The last time the Pioneers lost was on the road to Stevenson 5-4 on December 6, 2019. However, they remain unbeaten in 2020. They have earned a first round playoff bye and will host UCHC semi-final games on Saturday February 29th and Sunday, March 1st.

Utica Claims Sole Possession Of Second Place in the UCHC 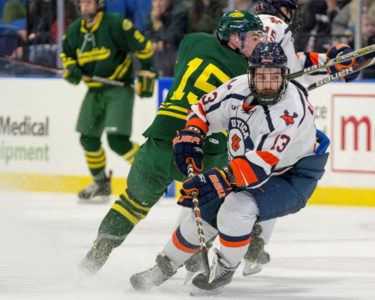