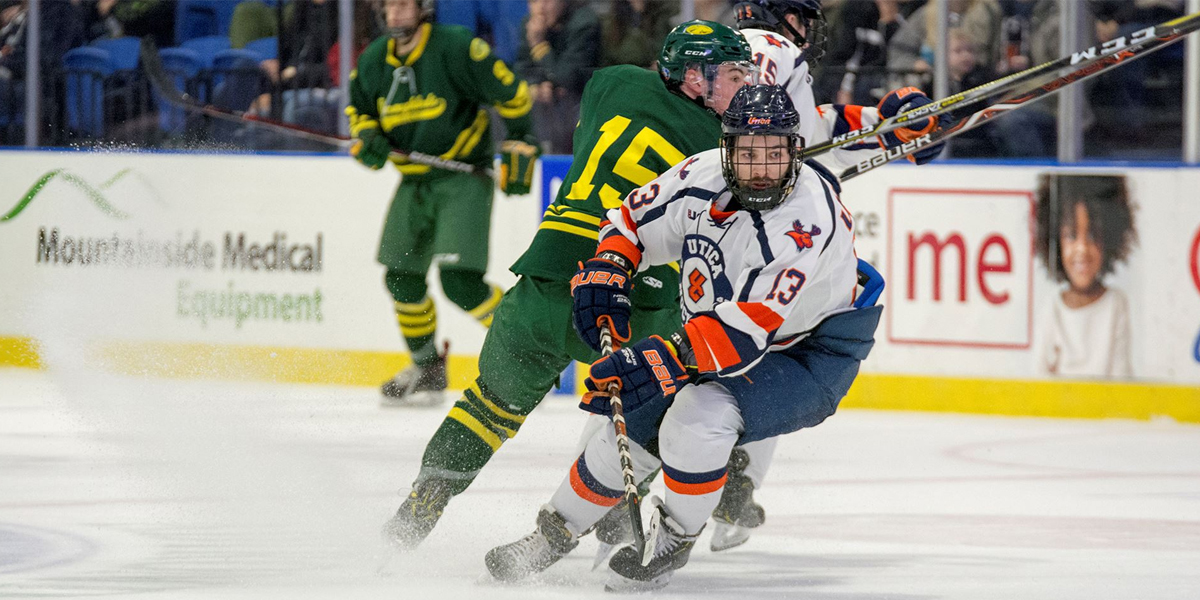 The offense continues to have many consistent producers on all of the lines. Conor Landrigan (Binghamton Jr. Sens) sparked the scoring for the Pioneers. Brandon Osmundson (Hampton Roads Whalers) and Daniel Fritz (Canisius College) worked the puck out of their zone and found Landrigan in the neutral zone who was then able to skate the puck by three Golden Flyers and flick a wrist shot by Nazareth’s goalie, Sean Kuhn (Boston Junior Rangers) at 9:42 in the first period. The Pioneers left for the first intermission up by one.

Both teams found the back of the net in the second period. Cameron Bartkoski (Amarillo Bulls) found a charging Kasper Kjellkvist (Curry College) whose shot was blocked by Kuhn, but team scoring leader Regen Cavanagh (Sioux Falls Stampede) pushed it over the goal line at 5:07. Utica was able to take advantage of the power play twice. The first time was at 7:37 in the second period. Blue line specialist Fritz passed to Landrigan who passed to Dante Zapata (Austin Bruins). Zapata put everything into his shot, so he fell to the ice as the puck lit the lamp. Nazareth’s only goal of the night came at 11:06 when Manlius, NY native, Mateo Capriotti, caught the Pioneers on a slow line change and was able to slide into the zone. Gianluca Baggetta (North York) was left unprotected and unable to stop the puck. Utica answered back at 14:10. Bartkoski created a turn over opportunity at the blue line that allowed John Moncovich (Hampton Roads Whalers) to push into the offensive zone with Jamie Bucell (Philadelphia). Bucell’s goal made the score a comfortable four to one in favor of the Pioneers. Justin Allen (Rochester Monarchs) was able to score in front of his hometown crowd with just :11 left in the second period. He took advantage of heavy traffic in front of Kuhn that was started by Donovan Ott (RPI) and Landrigan. The Pioneer’s lead was four going into locker room for the second intermission

The third period was all about Utica. Eric Holland (Brockville Braves) might want to change his major from Business Management to Physics after scoring at a bad angle… with his back hand. His goal was unassisted at 6:56. The next Pioneers’ goal came at 7:25 when Brett Everson (Hawkesbury) banged in the loose puck in the chaos created by Zapata and Senior Captain Jarrod Fitzpatrick (Northern Cyclones). On the power play, Fritz found Landrigan in the lane, who was able to score with another wrister at 13:41. The final Utica goal of the night was scored by Vaden McManus (Hampton Roads Whalers) at 16:48 on a deflection by Allen in front of the net. The Golden Flyers replaced an exhausted Kuhn (25 saves) after that goal with Michael Tilford (Connecticut Oilers). Tilford would save the one shot he would face in the final 3:12. Baggetta continued his win streak with 29 saves for Utica.

The Pioneers continue conference play on the road next week. They begin at #15 Elmira on Friday at 7pm and then travel to Lebanon Valley on Saturday at 4pm. 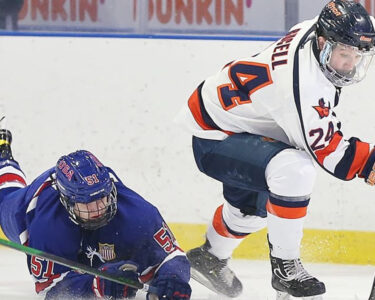 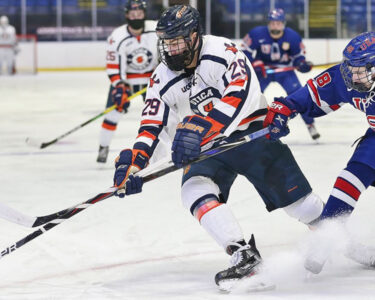