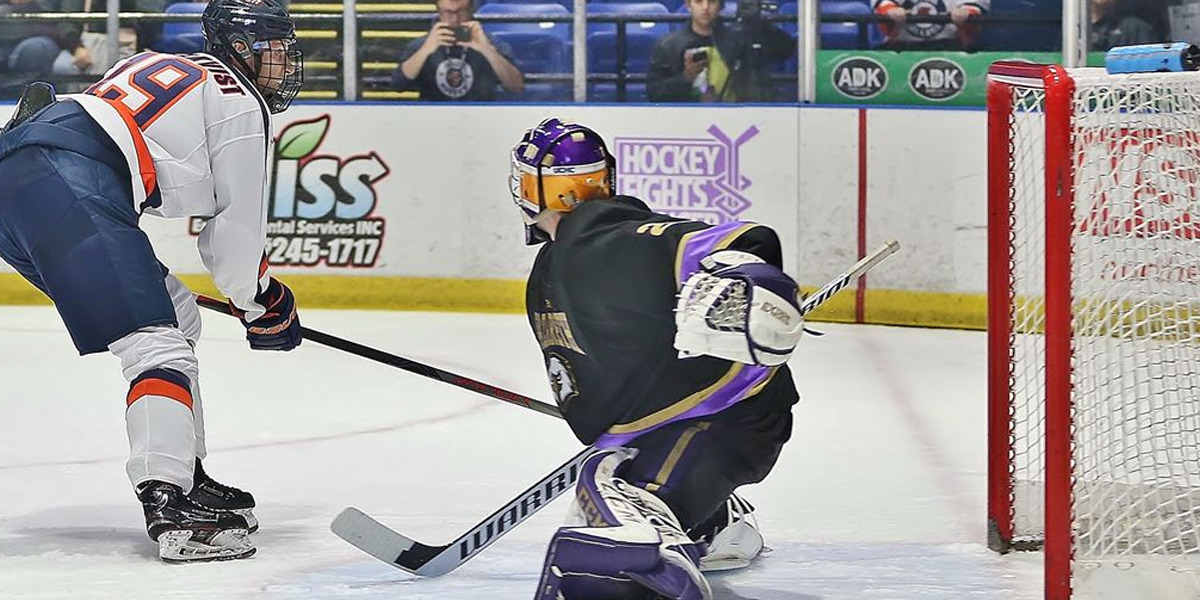 It was the battle for the top of the UCHC standings as #12 Utica College (3-0-1, 3-0) hosted Nazareth College at the Adirondack Bank Center on Friday night. Gary Heenan’s Pioneers got on the board first and never looked back. Justin Allen (Rochester Monarchs) cleared the puck to the UCHC’s Rookie of the Week, Brandon Osmundson (Hampton Roads Whalers), who sent it to Junior Conor Landrigan (Binghamton Jr. Sens). Landrigan scored his first goal of the season at 6:24 in the first period. At 10:32, the Landrigan and Osmundson line made it 2-0 on the power play when they assisted Daniel Fritz (Canisius College), who found the back of the net from the point. Fritz has a point in every game this season. Vaden McManus (Hampton Roads Whalers) found Cameron Bartkoski (Amarillo Bulls) who pushed the puck to Kasper Kjellkvist (Curry College) who was able to draw the Golden Flyers’ goalie, Sean Kuhn (Boston Junior Bruins) out of position for a beautifully timed goal.

Once again, Utica College took advantage of the power play in the third when Buster Larsson (Syracuse Stars) passed the puck behind the net to Donovan Ott (RPI) who got the puck to John Moncovich (Hampton Roads Whalers) to light the lamp. Nazareth was hoping to strike last when they pulled Kuhn to create a six on four power play with 9.6 seconds left in the game, but Sean Dickson (23 saves) stood his ground.

Utica continues its UCHC conference play when they host Lebanon Valley on 11/22 and Elmira on 11/23. Both start times are 7pm at the Adirondack Bank Center.