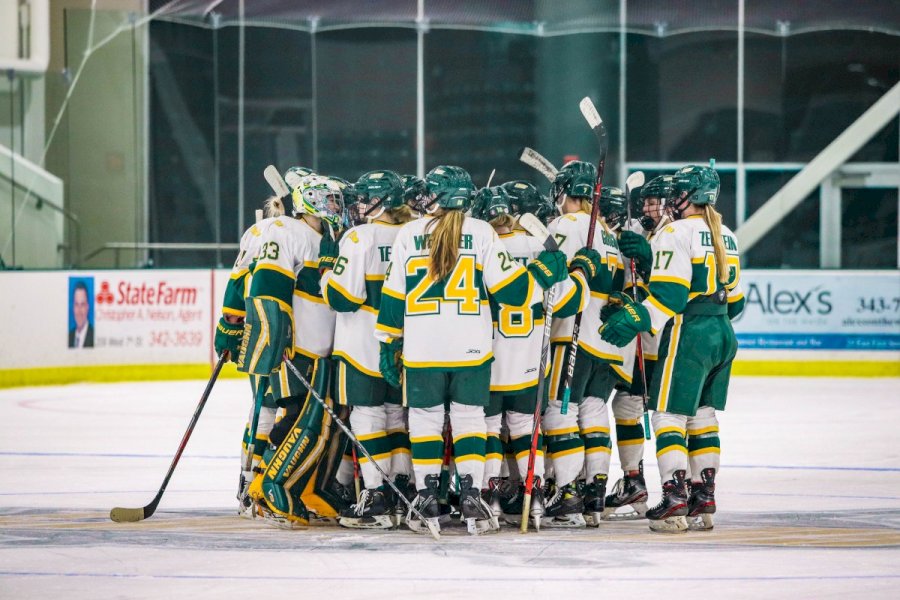 The Oswego State women’s hockey took a set back this evening against the London Jr. Devilettes in their first exhibition game of the 2022-23 season. The Lakers fell 9-5 to the Canadian squad that scored five goals in the final period to comeback for the victory. Despite the loss, head coach Mark Digby said he is pleased with how his team played.

“There is a lot of positives to take out of tonight,” Digby said. “We did enough to show that we are capable and what we need to work on is pretty obvious. I say both of those are both positives. I do not think it will take a lot of dissecting to drill this one down.”

The London Jr. Devilettes entered tonight’s contest with 18 games already played in the campaign, boasting a 12-4-2 record. The Lakers made some early season mistakes that most teams make due to the lack of team chemistry that may be missing at the start of the season.

“We you have played and gotten those reps in; your game timing is just there” Digby said. “If you look back at it from tonight, our game timing just was not there. We scored when we had chances, But as the game went on and we were forced to defend more, I think our timing on our breakouts and we over ran some of our routes.”

In terms of chances, some new faces and returners had solid performances in their first exhibition matchup. Ariella Haas and Simone Bednarik were all over the box score as both second-year players put up multiple points. Haas was able to complete her hat trick in the second period which was assisted by Bednarik.

Zoe Leas found the score sheet as well in the first period for her first tally as an Oswego State player. The defenseman found her offensive side of the game this evening while also impacting play away from the puck. Digby said how important it is to get players experience prior to the start of the regular season.

“To get [new players] in and get them experience is huge,” Digby said. “Hopefully in two weeks from now, they are more prepared. It is great to see new players set up, but I think a lot of the returning players took steps forward too.”

The team looks ahead to their next exhibition game that is slated for next weekend. Nazareth College of the United Collegiate Hockey Conference travels east to battle the Lakers on Oct. 22. The Golden Flyers enter the season ranked seventh in the nation based on the USCHO poll. Digby said the team has a lot to think about heading into their season but he is confident they will work well together.