Oswego State men’s hockey gets back into win column 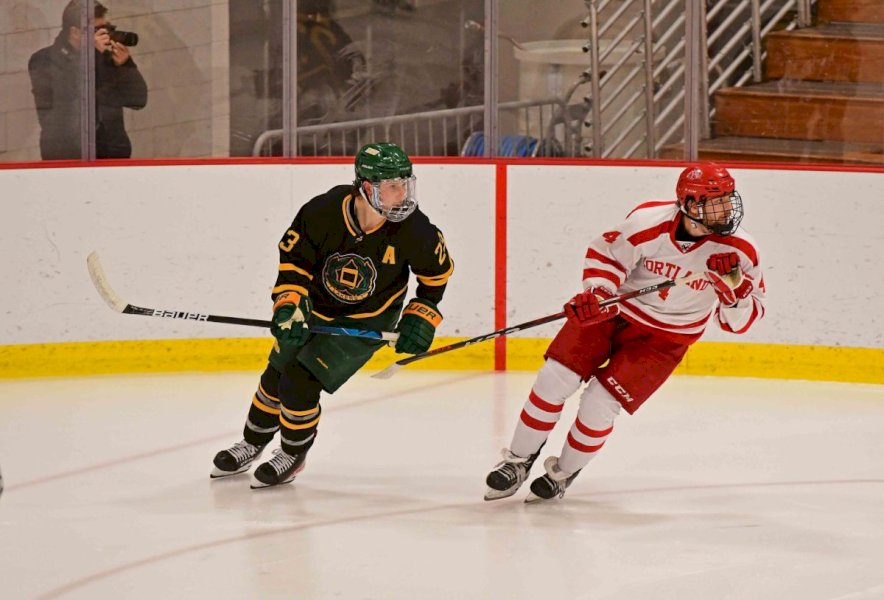 The Oswego State men’s hockey team returns to Oswego after their holiday break for the remainder of their 2022-23 season. In the fall semester, the Lakers went 9-4 overall and finished 7-1 in the SUNYAC.

The team was able to string together seven consecutive wins over the course of October and November. Oswego State head coach Ed Gosek credited the success to multiple different factors that put the team in the win column.

“We were starting to play better as a team,” Gosek said. “The goaltending solidified itself going with Cal [Schell]. It was a process with guys in and out of the lineup and everyone playing. We were competing harder and starting to execute.”

The team would fall into a three-game losing streak that started during the Thanksgiving tournament against Skidmore College with a 4-1 loss to the Thoroughbreds. The following weekend, Morrisville State defeated Oswego State for the first time since 2011 and the team would fall to nationally ranked Utica University the following evening.

“When you get out of rhythm and out of sync like that, it takes some time to get back,” Gosek said. “We got away from the fundamentals and good habits and pucks don’t fall. We start cheating for offense because pucks are not going in and we end up not playing as well defensively.”

The Lakers were able to right the ship on their road trip against SUNYAC opponents Buffalo State and SUNY Fredonia. Alex DiCarlo tallied two goals and two assists over the course of the two games. Tommy Cahill also snagged multiple points in the 5-2 win over Buffalo State on Dec. 9 with a goal and assist.

“[DiCarlo] is just starting to hit his peak,” Gosek said. “In the last three or four games, he has played extremely well. We are hoping Tommy Cahill with the big goal against Buffalo State that will get him going.”

There are plenty of players to turn to on the offensive side of the puck. Noah Bull added another goal to his season total in the previous game. Looking at the statistic sheet, transfers Daniel Colabufo and Thomas Rocco have both made an impact on the box score for most of the contests. Colabufo has recorded two goals and seven assists for nine points in his 13 games played. Rocco has found the back of the net five times this season and tallied three assists in his first season with the Lakers.

On the other end of the ice, freshman Cal Schell has owned the crease for Oswego State for a majority of the season. The netminder has played in 11 games this season posting a 2.27 goals against average with a .925 save percentage. Eric Green started against the Blue Devils on Dec. 10 and earned a shutout, the first by any goaltender this season for the Lakers.

“Green played very well against Fredonia,” Gosek said. “He was a little rusty in the first period, but he found his groove in the second period…Cal [Schell] on Friday was fighting the puck a little bit but he kept [Buffalo State] off the board for a while. Both of them played well on the weekend and that is a positive heading into our holiday tournament.

Looking ahead, Oswego State will host three teams for the Best Western Clarion Oswego State Hockey Classic that will take place Dec. 30 and 31. The Lakers will face Saint Anselm College on Dec. 30 with a 7 p.m. puck drop on Oswego Minor Hockey Association Night. Williams College and defending national champions Adrian College will faceoff prior to the Oswego State contest.

Saint Anselm travels to Oswego with an 8-3-1 record along with a 5-3-1 record in the NE-10 conference. On offense, the team is led by Andrew Andary who has six goals and six assists this season. Matt Hayes also has 12 points with five goals and seven assists through his 12 games played this campaign.

In net, Nick Howard has played 11 games for the Hawks. The senior goaltender has a 2.62 goals against average with a .918 save percentage. Saint Anselm gives up 2.6 goals per game and allows an average of 33 shots per game.

The Lakers are back on the ice practicing this week for their month of January as the month ahead features five matchups with three of them being conference games for Oswego State.

“The two skates that we had, they had a good jump in their step,” Gosek said. “They are rejuvenated and a little rusty. The execution is not great and not perfect. We do not expect it to be, but we just need it Friday night to be where it should be.”