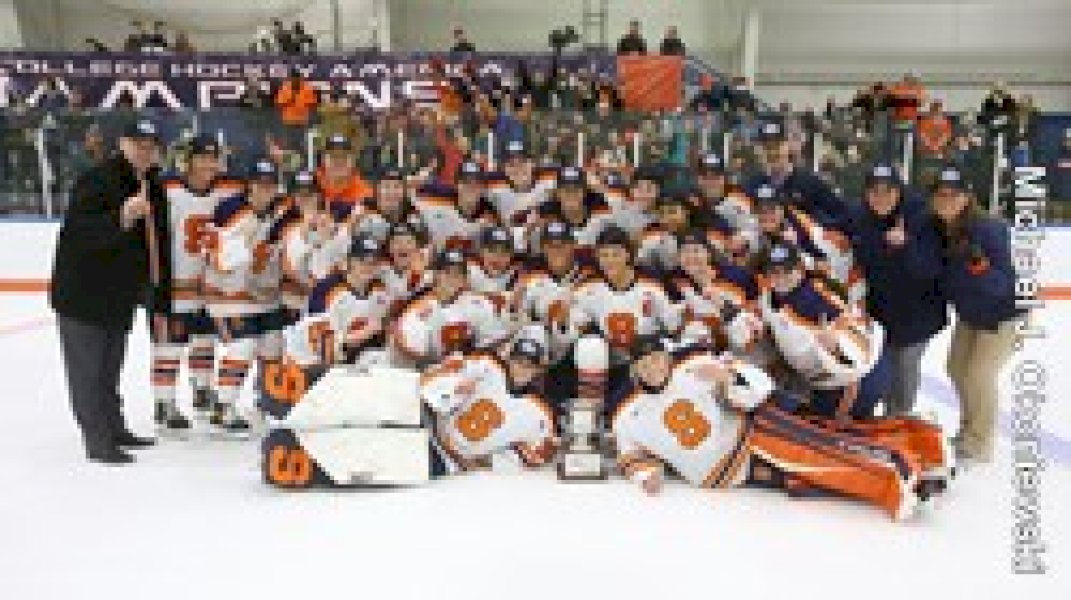 All Orange fans are invited to celebrate the Syracuse ice hockey’s 2022 College Hockey America Championship and welcome back the program’s alumni on Saturday, November 5th at Tennity Ice Pavilion. Syracuse hosts Lindenwood at 3 pm on Saturday. The Ring Ceremony and Alumni Weekend will be part of the in-game experience.

“We are excited to get our alumni back on campus and to celebrate the success of the team and the program last year,” said first-year Syracuse head coach Britni Smith. “This is a great opportunity to continue to build our alumni network. They are an important part of our program and culture.”

The 2021-22 Orange won the CHA regular season and conference tournament. Syracuse finished with an 11-4 league record to claim the first regular season CHA title in program history and earned the right to host the CHA Tournament. The Orange beat RIT in the semifinal, 3-2 in overtime to advance to the championship game and then defeated Mercyhurst, 3-2 in overtime in the championship game in front of a sellout crowd Tennity Ice Pavilion. Forward Sarah Thompson scored the game-winner for the title by gathering a rebound off of a shot by Jessica DiGirolamo and burying it into the back of the net at the 7:32 mark in the extra session.

Lauren Bellefontaine has scored points in 13 out of her 18 matchups against Lindenwood.

Mae Batherson has had 10 assists against Lindenwood out of her 37-career total.

Primeau had two goals in a game against Lindenwood last season.

Another Trio of Honors

Defenseman Mae Batherson is the CHA Defenseman of the Month after leading the Orange with seven assists, having 13 blocks and 25 shots. Syracuse goaltender Arielle DeSmet is the CHA Goaltender of the Week for the second consecutive week and forward Sarah Marchand is the league’s Forward of the Week. The pair led the Orange in a series sweep of RIT.

Graduate student Lauren Bellefontaine is ninth on Syracuse’s career points record list after recording a goal and an assist in the RIT series. The forward has 88 career points, four shy of the eighth spot on the list which is held by Jessica Sibley.

Graduate student Arielle DeSmet is second on Syracuse’s career saves record list. She added 42 saves, including 17 in the game against RIT and then 25 at RIT. DeSmet is also among the standouts on the single-game and single-season saves record lists: