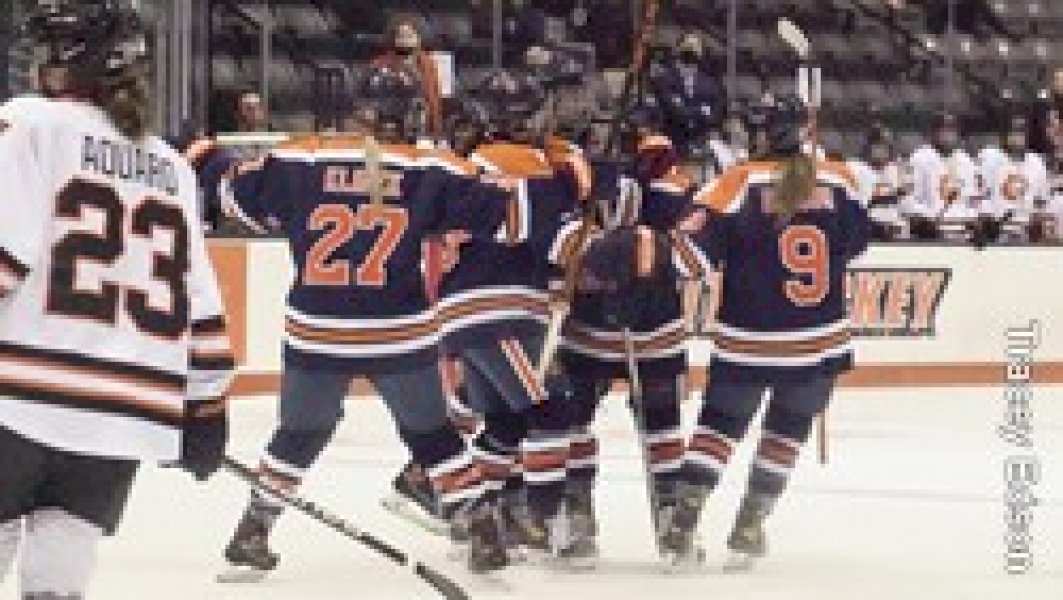 Syracuse scored three goals in the third period to secure a 5-2 win and a sweep of the RIT Tigers on Saturday in the Gene Polisseni Center. Four different skaters tallied goals for the Orange (9-9-5 overall, 7-3 College Hockey America) and Syracuse’s 11th-ranked penalty kill unit came up big shutting down the Tigers five-on-three for more than two minutes late in the third period.

The win is the third in a row for the Orange, who host Lindenwood next weekend in a pair of games. Syracuse will celebrate Senior Day on Saturday, January 29 at 3 pm.

“This gives us pretty good momentum heading into Senior Week when we host Lindenwood and then we have to go to Penn State and Mercyhurst,” said head coach Paul Flanagan. “I give RIT credit. They really played hard last night and tonight in trying to get a win. They made us work. In the third period, even before the 5-on-3 penalty kill, we had pretty good focus, we were getting some pretty good bids. At the same time, that could have turned the tables. That was a gutsy kill by our kids who were out there and it energized the bench. It is critical for what we are trying to do at the end of the year.”

Bellefontaine gave the Orange a 1-0 lead less than eight minutes into the game. The forward controlled a rebound off of Jessica DiGirolamo’s shot and put the puck into the right side of the net past RIT (0-23-1, 0-9-1 CHA) goaltender Sarah Coe. DiGirolamo and Moloughney had the assists. The Tigers evened the score five minutes later on a goal by Emma Roland.

In the second, sophomore Hannah Johnson scored on a shot from the blue line to put the Orange up 2-1, at the 12:05 mark period. RIT tied the game less than a minute later on a goal by Bailey Kehl.

Syracuse will host Lindenwood for a home-and-home series at Tennity Ice Pavilion on Friday, Jan. 28 (7 pm) and Saturday, Jan. 29 (3 pm). During Saturday’s game the Orange will honor the seniors for a senior night celebration. The games will be streamed on Cuse.com.

Colgate Gets Back on Track with Victory Over Brown