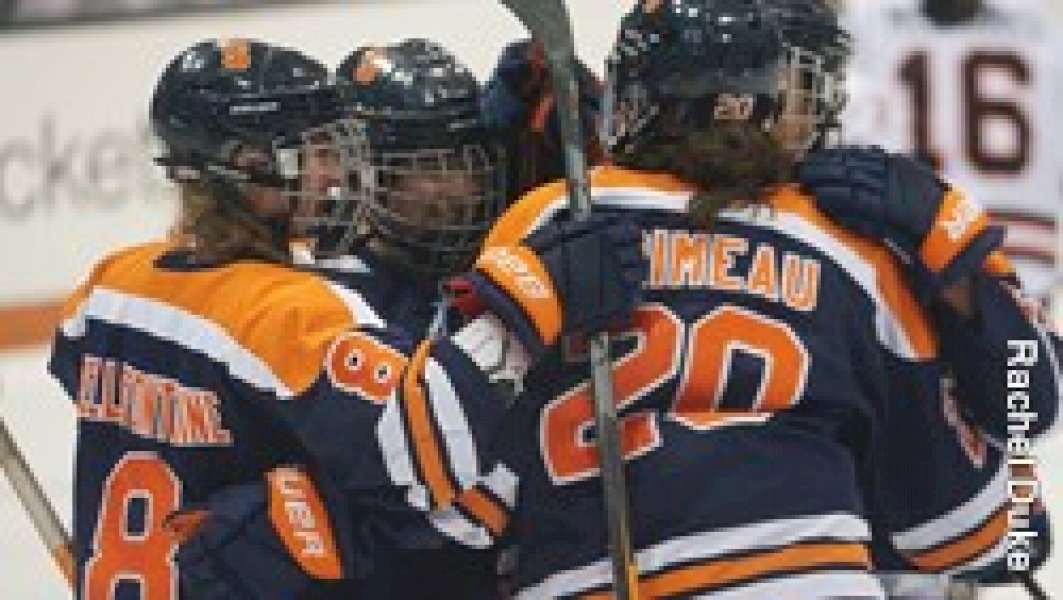 ROCHESTER, N.Y. — Seven different players scored goals in Syracuse’s 7-0 shutout at RIT on Saturday to complete the series sweep of the Tigers. Graduate student Jessica DiGirolamo led the Orange offense with three points, including a goal and two assists. Syracuse won the first game 3-2 in overtime on Friday.

“We started with energy and maintained it tonight,” said head coach Paul Flanagan. “We put a lot of pucks on net, got the rebounds and scored some nice goals. That builds the confidence and it went through the team. Everybody had a lot of confidence. It started with Rayla on her penalty shot. She made a nice play to be rewarded with the penalty shot and she scored a nice goal. Her energy drew the penalty and from there you could feel the adrenaline on the bench. That was good for us in a lot of ways.”

In the first period, sophomore Rayla Clemsons stole the puck at the Orange blue line and carried it up the right side and was tripped right in front of the goal, earning a penalty shot. She converted the penalty shot with a fake to the left and then bringing the puck back around the goalie’s left foot and scoring on a backhanded shot just more than seven minutes into the game.

Redshirt junior Marielle McHale gave the Orange a 2-0 lead with a goal from the right circle into the top right corner of the goal at the 11:57 mark in the opening period.

Junior Brynn Koocher scored the first of five Syracuse goals in the second period. She put the Orange up 3-0 when she stole the puck at the blue line, tipped it to McHale, got the pass back as she cut toward the goal and scored on a backhanded shot at the 5:50 mark of the period.

Two minutes later graduate student Jessica DiGirolamo made it 4-0 with a shot between the circles for the goal. Graduate student Victoria Klimek set up the play by passing to freshman Sarah Marchand who fed DiGirolamo as she cut toward the middle.

With three minutes remaining in the second period, freshman Madison Primeau tallied the first of three goals in two minutes for the Orange. Senior Abby Moloughney set up the play, feeding DiGirolamo who hit Primeau on a backdoor cut for the score on the doorstep to make it 5-0 Syracuse.

Marchand scored one minute later on a feed from Lauren Bellefontaine. DiGirolamo recorded her third point on the game by setting up the score.

Klimek made it 7-0 one minute later when she took a rebound and scored. Junior Mae Batherson and sophomore Tatum White recorded the assists.

Syracuse will play at Cornell on Tuesday, November 9 at Lynah Rink at 7 pm. The game will be streamed on ESPN+.