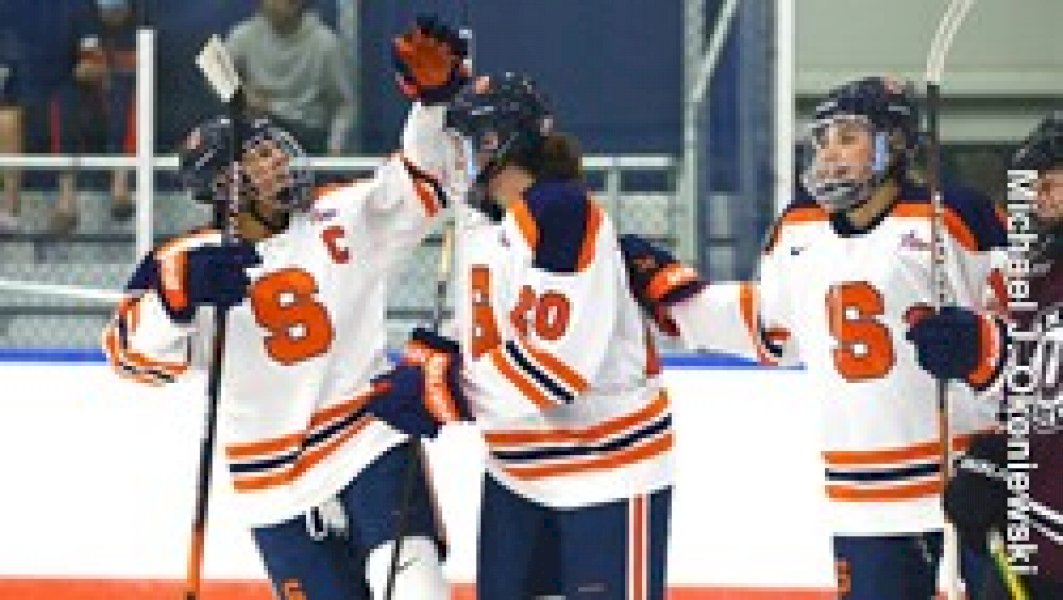 Five Syracuse players scored goals in a 5-0 win against Union on Tuesday night at Tennity Ice Pavilion. The Orange (1-2-2 overall) opened the scoring with a pair of goals in the second period and added three scores in the third period against the Dutchwomen (2-3). Senior goaltender Arielle DeSmet recorded 21 saves in her first shutout in a Syracuse uniform.

“It really gets everyone going when the scoring is distributed throughout the lineup like tonight,” said head coach Paul Flanagan. “It is good that we spread it out a bit and hopefully that continues. This win gives us good momentum going into the series with Colgate starting Thursday night.”

In the second period, freshman Madison Primeau tallied the first goal of her collegiate career to give the Orange a 1-0 lead with 15:02 remaining. Graduate student Victoria Klimek took a shot on goal that was deflected by Union goalie Sophie Matsoukas. Primeau corralled the loose puck and fired the shot past Matsoukas.

Junior Brynn Koocher scored Syracuse’s second goal on a breakaway with six minutes left in the second period. She took a pass from junior Mae Batherson at the Union blue line, sprinted to the goal and put the shot in the top right corner over Matsoukas’ left shoulder for the 2-0 Syracuse lead.

Senior Lauren Bellefontaine gave the Orange a 3-0 lead early in the third period scoring on a give-and-go from freshman Sarah Marchand.  Bellefontaine scored her third goal of the season by faking to the right and putting the puck into the left side of the net with 15:24 remaining in the game. It was the second give-and-go connection for Bellefontaine and Marchand this season, and Bellefontaine’s third goal this year. Marchand leads the Orange with four assists in 2021-22.

Redshirt junior forward Marielle McHale scored Syracuse’s fourth goal with 5:03 left in the game on an assist by senior defenseman Shelby Calof, who carried the puck toward the goal on the left side and passed it in front of the net. McHale gathered the loose puck that deflected off of a Union player’s stick and put it in the top left corner of the net.

Sophomore Tatum White tallied her second goal of the season to close out Syracuse’s scoring in the game with 3:33 left to play. Sophomore Hannah Johnson passed the puck from the right side to Calof in the middle and then Calof fed White for a shot from the top of the left circle.

The Orange will compete in a home-and-home series against Colgate University on Thursday, October 14th (6 PM) at Class of 1965 Arena in Hamilton, N.Y. and Saturday, October 16th (4 PM) at home at the Tennity Ice Pavilion. Admission to Orange ice hockey home games is free. All fans attending games must adhere to Syracuse University’s COVID-19 policy, which can be found here. The game will be streamed on Cuse.com.