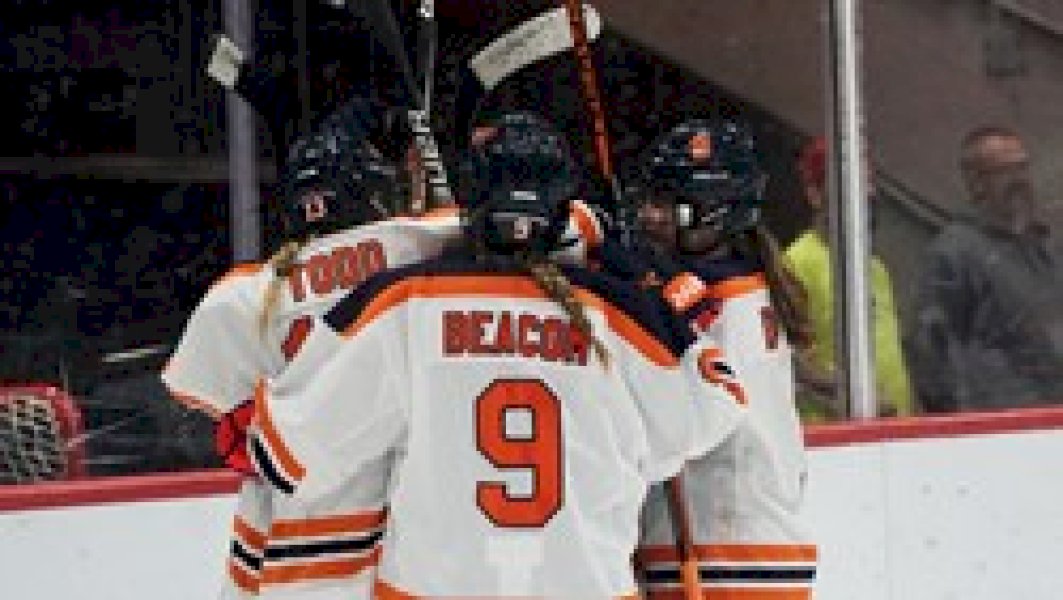 “In terms of confidence in our goalie, we definitely have it,” said Syracuse head coach Britni Smith. “Arielle comes up big when she needs to and keeps us in games. We practice shootouts in practice and Madi is someone who consistently has pretty good poise and you could tell when she went in there, she had confidence in that one.

“Tonight is the first time we have gone into the third period with a lead so now it is figuring out how to be the team that maintains the lead. We have been used to trailing in the third and having to come back so it is a different mindset that we need to get used to.”

In the first period, freshman Mik Todd scored her first collegiate goal to give the Orange a 1-0 lead at the 2:22 mark in the game. Senior Mae Batherson and sophomore Sarah Marchand assisted on the play. Less than three minutes later sophomore Primeau scored to put Syracuse ahead 2-0 on a wraparound goal. Batherson and junior Hannah Johnson assisted on the play. Holy Cross cut the ‘Cuse lead to one when Mary Edmonds scored with less than six minutes left in the opening stanza.

In the second period, after Holy Cross tied the game, 2-2, Syracuse captain Lauren Bellefontaine gave the Orange the lead again with her second goal of the season. With less than six minutes left in the second period, Todd corralled a loose puck amid a group of players on the board in front of Syracuse’s bench and passed the puck to sophomore Sarah Marchand down the left side of the ice. Marchand passed to Bellefontaine in front of the Holy Cross goal, where Bellefontaine put it in for the 3-2 Syracuse lead. In the third period, Holy Cross tied the game, 3-3, with less than eight minutes remaining on a goal by Milie Sirum. After neither team scored in the overtime period the shootout was held to determine the third place finisher.

The last time the Orange had a shootout, they beat Boston University to advance to the championship of the Battle at the Burgh. Syracuse won that tournament beating St. Cloud State in the championship game. This was Syracuse’s second overtime game of the season and the Orange are 1-0-1 in those games. Syracuse beat Merrimack in an extra session in the third game of the season. Orange freshman Mik Todd had a goal and an assist, recording her first collegiate points. Senior Mae Batherson and sophomore Sarah Marchand each had two assists for the Orange. They are tied with graduate student Lauren Bellefontaine for the team lead with four this season. Bellefontaine, who scored her second goal of the season, leads the team in scoring with six points.

“Points matter now,” said Smith about starting conference play. “That is the biggest thing. We need to make sure we find our consistent 60 because giving up points here and there will cost you at the end of the season. Now it is really finding that 60 minutes to make sure that at the end of the game when we go up 2-0 we are coming out with a win.”