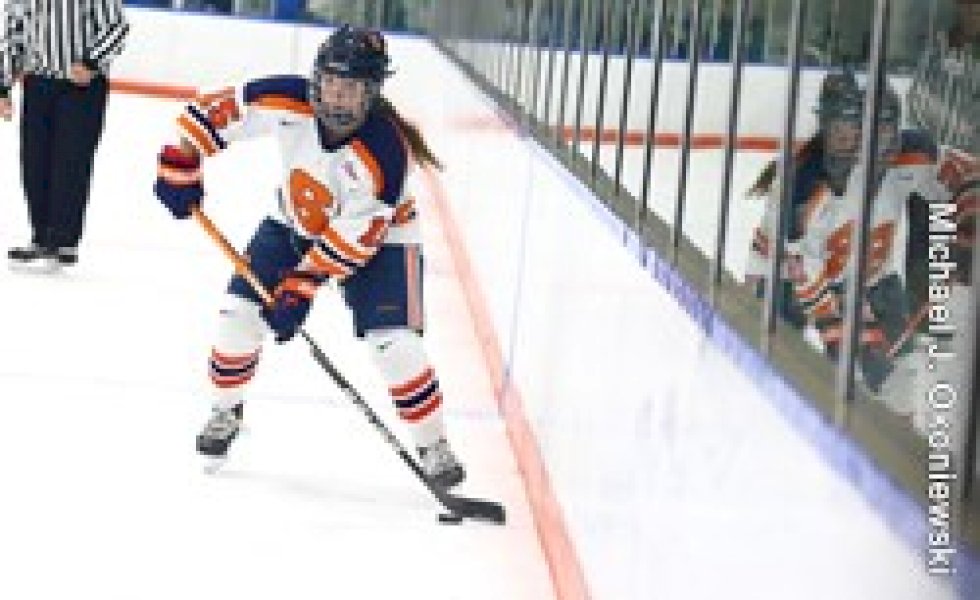 The Orange begin their College Hockey America schedule this weekend at Lindenwood. Syracuse will play the Lions on Friday, October 22nd at 3 pm and Saturday, October 23rd at 1:30 pm at the Centene Community Center.
Syracuse leads the series against the Lions at 26-5-2, including sweeping the four games played in 2020-21.

HONORS FOR THE ORANGE
Two Syracuse players earned CHA weekly awards for their performances last week. Freshman Madison Primeau earned CHA Rookie of the Week after scoring a goal in each of Syracuse’s games, including her first collegiate goal against Union. She scored again when the Orange played at third-ranked Colgate, and then recorded one goal and one assist in Syracuse’s game against Colgate at home. Her three-game goal streak ties for ninth in the Syracuse record book.

Graduate student Jessica DiGirolamo garnered CHA Defenseman of the Week accolades after setting the Syracuse record for points by a defenseman with an assist at #3 Colgate. She has 77 career points (27 goals and 50 assists). During the three-game stretch last week DiGirolamo also had eight shots on goal and seven blocks. She ranks fifth on the CHA record list for points by a defenseman and is the 10th defensemen in CHA history to record 50 career assists. Syracuse has a strong presence on the CHA’s top 10 list for all-time assists by defenseman with five. DiGirolamo joined Akane Hosoyamada (51), Allie Munroe (51), Lindsay Eastwood (52) and Nicole Renault (58).

Graduate student Jessica DiGirolamo set the Orange record for points by a defenseman with 77. She is 10th on the Orange career points record list. Her 27 goals is the Syracuse record for defensemen, while her 50 career assists ranks 10th all-time.

THE OPPONENT
Through six games this season, the Lions are led by Valerie Caldwell (2 G, 3 A) and Sierra Burt (1 G, 4 A) lead the Lions (0-6) with five points each. Burt recorded four points on one goal and three assists against Minnesota State.

UP NEXT
Syracuse will return home to play RIT on Friday, November 5th (7 PM) at Tennity Ice Pavilion and Saturday, November 6th (6 PM) at Gene Polisseni Center in Rochester, NY. The games will be available to watch on Cuse.com and Stretch.

50 YEARS OF SYRACUSE WOMEN’S ATHLETICS
Orange alumni, fans and friends are invited to share in a year-long celebration of 50 years of Syracuse University women’s athletics. Events and special recognition of all female student-athletes who have donned the Block S to represent Syracuse University and the Athletics Department since 1971-72 will be held throughout the 2021-22 seasons. As we celebrate this history, we acknowledge those who have gone before us to set the standard we strive to achieve today so we can pave the way for the future. We reflect on the history of women in sport, admire their sacrifices, recognize their contributions and accomplishments, and honor their legacy.