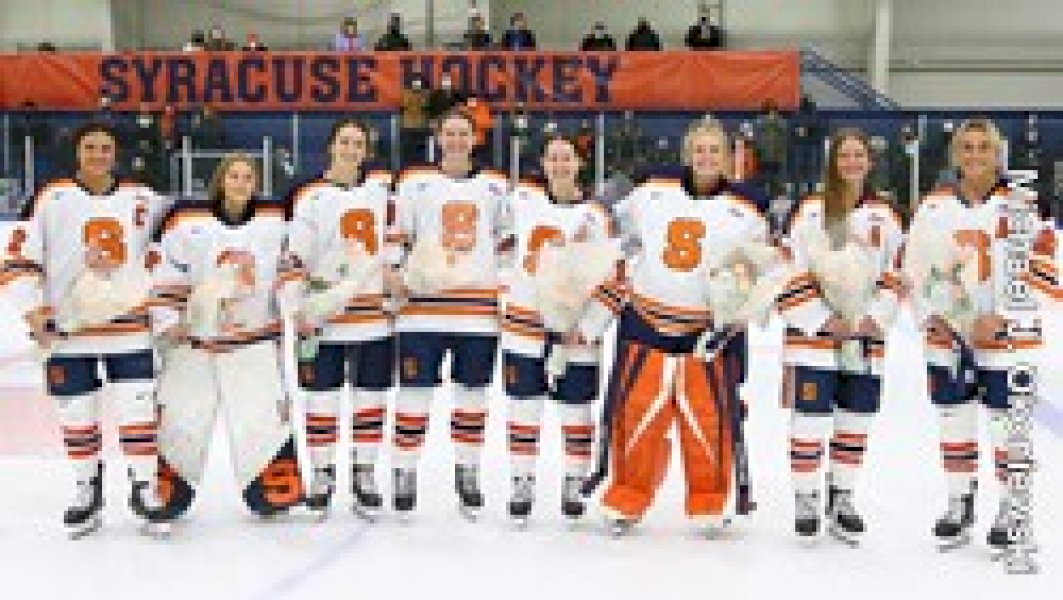 The Orange recorded the program’s 200th victory with a 4-3 win against Lindenwood before a capacity crowd on Saturday at Tennity Ice Pavilion. Head coach Paul Flanagan, who has 429 career victories, has led Syracuse since the program started in 2008-09. The sweep of Lindenwood extends the Orange (11-9-5 overall, 9-3 College Hockey America) win streak to five, dating back to the championship victory at the ‘Battle at the Burgh’ on January 2.

Syracuse graduate student Victoria Klimek scored the game winner with just more than six minutes remaining in regulation. Sophomore defenseman Hannah Johnson started the play in Syracuse’s defensive zone with a pass behind the Orange goal to White who hit a streaking Klimek with a pass at center ice. Klimek scored on the one-on-one firing a shot into the right side of the goal.

“Victoria was lights out today and the rest of the seniors did a great job for us,” said head coach Paul Flanagan. “We know this win gets us one step closer. We have to keep winning and we will be back here at the end of February (to host the CHA tournament). It is exciting for the kids that we are in the hunt every time we are playing. Every period there is intensity, you have to muster the energy and have the wherewithal to make plays, whether it is blocking a shot, getting the puck out or executing to score goals.”

In the second period, Lindenwood (5-19, 3-7) scored the first goal of the game to take a 1-0 lead with 7:05 left on a goal by Sierra Burt. Bellefontaine tied the game, 1-1, scoring a goal with 27.3 seconds remaining in the second. Sophomore Rayla Clemons set up the goal when she took the puck at the blue line, carried it up the ice and fired a shot from the right side of the goal. Bellefontaine one-timed the rebound into the top right corner for the score.

Lindenwood started a five goal third period just more than a minute in, but its 2-1 lead was short lived. Syracuse’s Sarah Thompson tied the game, 2-2, with a goal from the right circle 50 seconds later. The scoring play started in the Orange defensive zone when sophomore Hannah Johnson dove and pushed the puck to Thompson on the right side and Thompson took it to the LU goal for the score with 18:02 left in regulation.

Two minutes later sophomore Tatum White gave the Orange their first lead of the game, 3-2. Freshman Terryn Mozes carried the puck up the right side of the ice and passed it to Klimek who took it to the slot and dropped a pass to White, who fired the shot past Lindenwood goalie Julia Maguire with 16:18 remaining. After the Lions tied the game, 3-3, with just more than 11 minutes remaining, Klimek scored the game winner.

“After they took the lead on the shorthanded goal to start the third period, for us it was a matter of just bearing down and not getting too down,” Flanagan said. “This was like a playoff game – you have to see what you are made of – so I think it is good for us. It shows a lot of character that we came through at the end.”