Orange Move into First Place In CHA with Win Against Mercyhurst 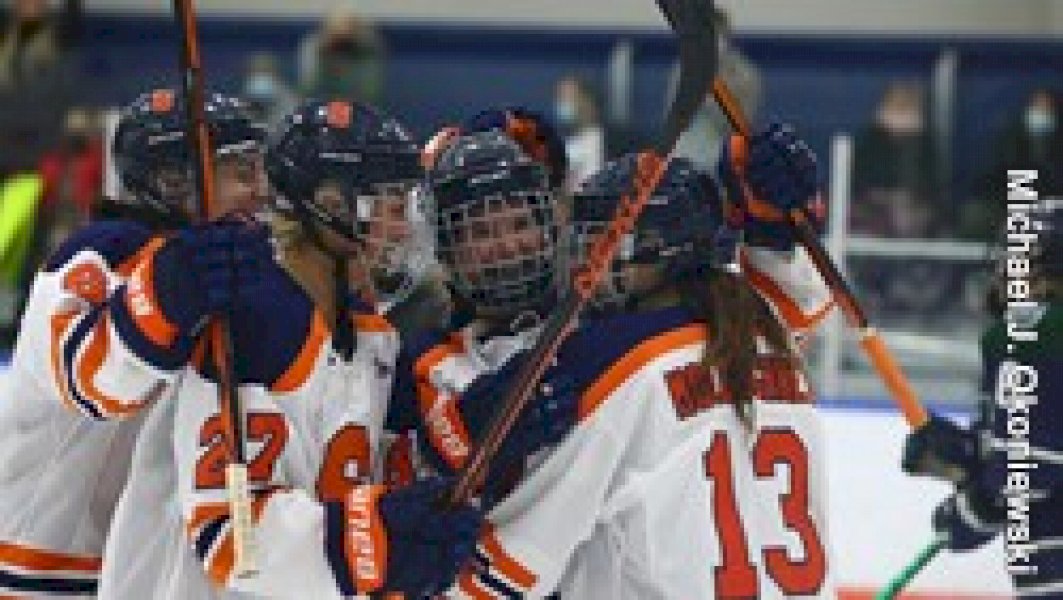 Senior Lauren Bellefontaine, junior Anna Leschyshyn and graduate student Victoria Klimek scored goals in Syracuse’s 3-1 win against Mercyhurst in a College Hockey America league game on Saturday at Tennity Ice Pavilion. The Orange (6-7-3 overall, 5-3 CHA) scored two goals in the second period and added an empty net goal in the final minute to earn the split in the series with the Lakers and take possession of first place in the CHA standings.

“It was obviously very high on the priority list to get two points today. It is a huge two points,” said head coach Paul Flanagan. “Other than the two points, it is just a real character win. I thought the players gutted it out when they had to. For us to come from behind, get the lead and maintain the lead is something we haven’t really done much of this year. That is a team that does not stop coming at you. We had mentioned that this is a playoff-type game and it certainly was. That is what you are going to see in the playoffs.”

After Mercyhurst’s Liliane Perrault gave the Lakers (13-6-2, 4-2) a 1-0 lead 5:26 into the game, the Orange responded to score a pair of goals in the second period to take a 2-1 lead. Bellefontaine tied the game, 1-1, with a shot from the right side that went across the goal mouth past Mercyhurst goalie Ena Nystróm and into the far corner of the goal. Sophomore Kambel Beacom set up Bellefontaine’s goal with a pass from the Orange defensive zone up the right side.

Junior Anna Leschyshyn put the Orange ahead scoring a goal on a rebound in front of the net from Victoria Klimek’s shot from the left side of the goal with 2:21 remaining in the second period. Klimek added the third goal for the Orange out-skating a Mercyhurst player to get to the puck and put it in the net from the top of the right circle with 15 seconds left to play.

Senior goalie Arielle DeSmet recorded 40 saves, to increase her weekend total to 83. It was her third game with more than 40 saves this season.

“Arielle made the saves when she had to. She made some big saves down the stretch and looked very composed while she was doing that. That is the thing that is really impressive about her is she is very composed under pressure. I think all of the players in the defensive zone respond to that. It does help us with our clearings and settles everybody down.”

The win puts the Orange in first place in the CHA standings with 10 points. Penn State and Mercyhurst are tied for second with eight points each.

Syracuse will host Princeton for another home-and-home series at Tennity Ice Pavilion on Friday, Dec. 10th (6 pm) and Sat, Dec. 11th (2 pm). The games will be streamed on Cuse.com. The Orange will resume the season on January 1st at the Battle in the ‘Burgh Tournament in Pittsburgh.