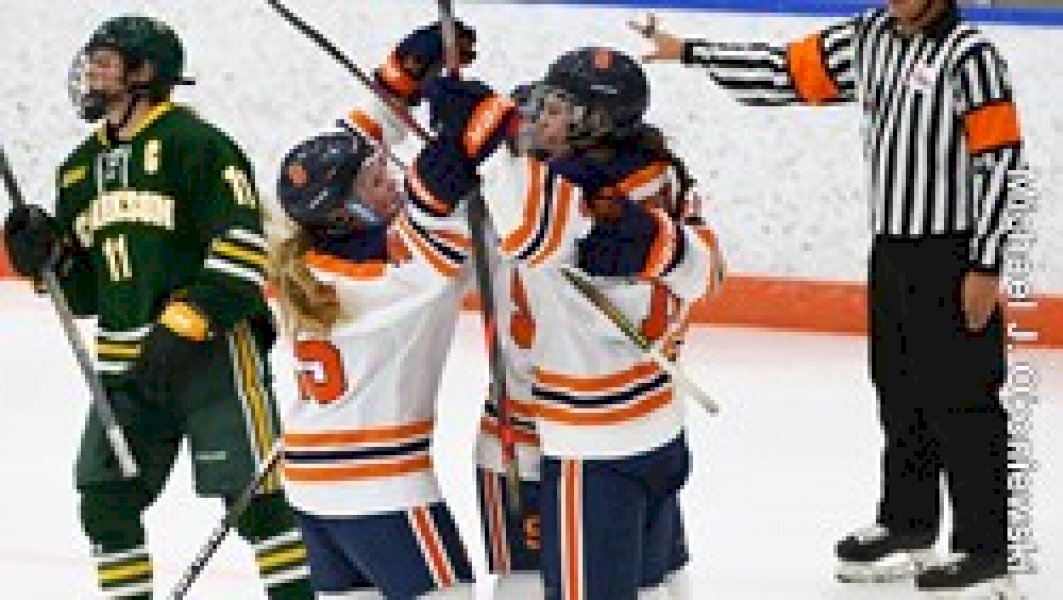 The Orange return to Tennity Ice Pavilion on Tuesday, October 12th to host Union College at 6 pm. The Orange lead the series against the Dutchmen, 9-2, and have won the last three meetings. Admission to Orange ice hockey home games is free. All fans attending games must adhere to Syracuse University’s COVID-19 policy, which can be found here. The game will be streamed on Cuse.com.

In the weekend series against Clarkson, ‘Cuse forced both games into overtime. The Orange lost the first game, 3-2, in Syracuse, and tied the second, 1-1, in Potsdam. Senior Lauren Bellefontaine and sophomore Tatum White each scored a goal in the first game. In the second contest, senior Abby Moloughney scored the lone goal for Syracuse. CHA Preseason Co-Rookie of the Year Sarah Marchand tallied two assists in the series. Goalie Arielle DeSmet also recorded a total of 71 saves in the two games.

Orange senior Arielle DeSmet is the College Hockey America (CHA) Goaltender of the Week for her performance in Syracuse’s games against Clarkson, a team that is receiving votes in the national rankings. She had 34 saves in a 3-2 overtime loss in Syracuse on Thursday and recorded 37 saves in a 1-1 tie at Clarkson on Saturday.  The 37 is two shy of her career-best of 39 (set at Robert Morris).

IN THE RECORD BOOKS

Senior Abby Moloughney, who recently earned the CHA Offensive Player of the Week for her performance in the game against St. Lawrence, has 77 career points, which ranks 10th in Syracuse history. Her 32 goals ranks 11th in the Orange record books for career goals scored. Defenseman Jessica DiGirolamo is tied for 11th on the Orange career points record list with 76. Senior Lauren Bellefontaine recently joined the Syracuse 60 Point Club. She has 63 career points, including 23 goals and 40 assists.

Union is 2-2 this season with a pair of wins against RIT and two losses to RPI. The Dutchmen did not play in 2020-21 due to the COVID-19 pandemic.

The Orange will compete in a two-game series against Colgate University on Thursday, October 14th (6 PM) at Class of 1965 Arena and Saturday, October 16th (4 PM) at home.