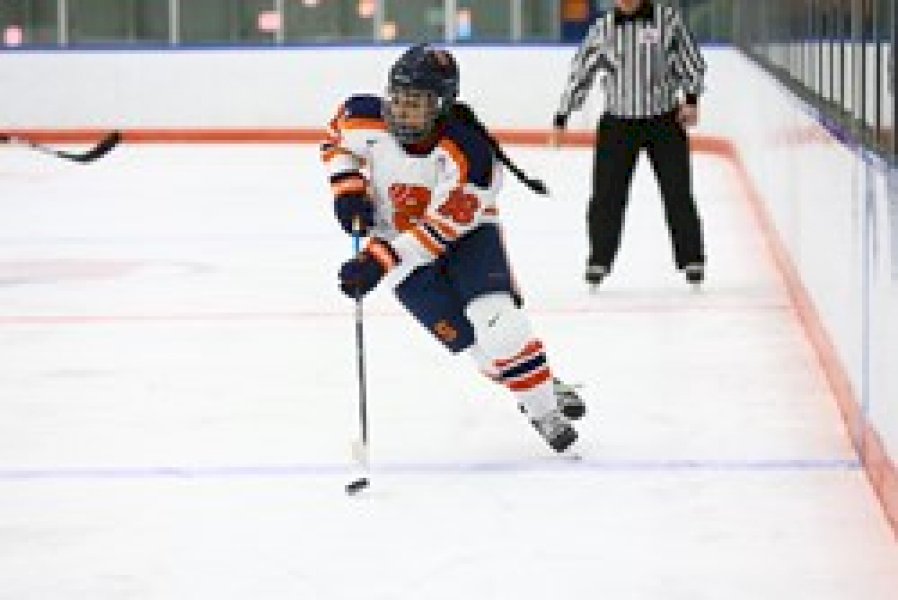 The Orange host College Hockey America rival Mercyhurst on Friday, Dec. 3rd (7 pm) and Saturday, Dec. 4th (3 pm) at Tennity Ice Pavilion. The Orange are 4-2 in the CHA and tied for first place with Penn State and Mercyhurst is next with a 3-1 league record. Admission to Orange ice hockey games is free. All fans attending must adhere to Syracuse University’s COVID-19 policy, which can be found here. Both games will be streamed on Cuse.com.

Five Orange have played in more than 100 games at Syracuse, including forward Victoria Klimek, whose 147 career games ranks third on the Syracuse career record list. Defenseman Jessica DiGirolamo has played in 146, which is fourth at Syracuse. Forwards Abby Moloughney (111) and Lauren Bellefontaine (110) and defenseman Shelby Calof (103) round out the group of five in the Century Club. Forwards Marielle McHale (81) and Anna Leschyshyn (73) defenseman Mae Batherson (73) are next in line.

Defenseman Jessica DiGirolamo earned the College Hockey America Defenseman of the Month for the second time this season. The Mississauga, Ontario native earned the award for her performances in Syracuse’s six games in November. DiGirolamo scored four goals and had four assists during the stretch that included a sweep of RIT and a series split against Penn State in league play and a pair of non-conference losses at Vermont.

Syracuse will host Princeton for another home-and-home series at Tennity Ice Pavilion on Friday, Dec. 10th (6 pm) and Sat, Dec. 11th (2 pm), concluding the first half of the 2021-22 season. The Orange will resume the season in January traveling to Pittsburgh for Battle in the ‘Burgh tournament. The games will be streamed on Cuse.com.