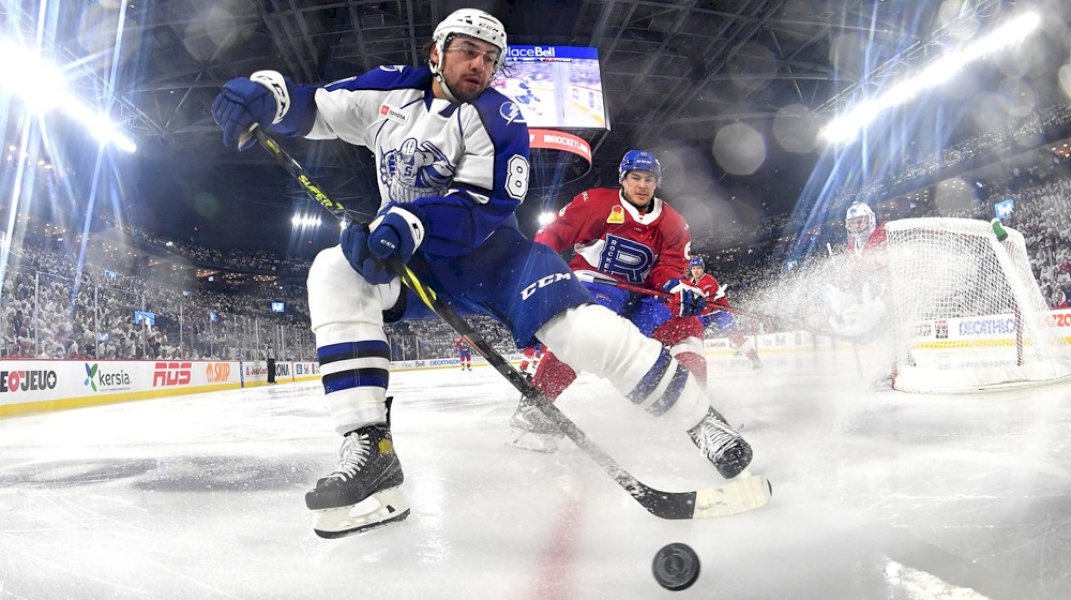 The Crunch look to keep their season alive as they take on the Laval Rocket in Game 4 of the North Division Semifinals.

After a split of two games in Syracuse, the Rocket pushed the Crunch to the brink of elimination with a 4-1 win in Game 3 at Place Bell Thursday night.

The Rocket scored a pair of power-play goals and defeated the Crunch, 4-1, in Game 3 of the North Division Semifinals at a sold out Place Bell.

Laval earned four power plays in the first period, and the Rocket capitalized on the first one. Danick Martel wired home a right circle one-timer 2:43 into the game to give the Rocket an early lead. The Crunch survived the rest of those penalties in the first period and then broke through in the second frame to tie the game. Max Lagace made a save on a 2-on-1 for Laval and then Darren Raddysh set up a breakaway for Remi Elie, who blasted a left circle slap shot to tie the game.

The teams remained tied into the third period before Cedric Paquette redirected in another power-play goal 8:49 into the final frame. The Crunch came close to tying, but Laval added two empty-net goals late to come away with a 4-1 win to take a 2-1 series lead.

The Crunch hope to extend their season to a winner-take-all Game 5 in Syracuse Tuesday night. After scoring at least three goals in 19 of their final 26 regular season games (19-5-1-1), the Crunch have done it just once in their first three playoff games. Syracuse has been outscored by Laval, 10-8, through three games; the Crunch have actually outscored the Rocket, 5-4, at 5-on-5 (excluding empty-net situations for both teams) in the series.

Forward Remi Elie netted the only Crunch goal in Game 3. He is now tied with Anthony Richard for the team’s lead with two goals in the series. Elie, who went to the Calder Cup Finals with Texas in 2018, has now match his goal total from that 19-game playoff run; he has 11 points (4g, 7a) in 29 career playoff games.

The Rocket earned a win in Game 3 in their first ever home playoff game, and now are on the verge of their first series win in franchise history. A Montreal AHL affiliate has not won a playoff series since 2011 when the Hamilton Bulldogs made a run to the Western Conference Finals.

No matter what, tonight is the final game of the series at Place Bell. The Rocket finished the season with the best home record in the Eastern Conference at 24-8-3-1. Their 0.722 home points percentage tied with Manitoba for fourth overall in the league, trailing only Stockton, Ontario and Chicago. The Crunch are 0-4-1-0 in Laval this season, including playoffs.

Defenseman Sami Niku leads the team in scoring with four points; he had three assists in their Game 1 loss before picking up the primary helper on Danick Martel’s opening goal in Game 3.

Cayden Primeau has won his first two career playoff starts to help Laval take a 2-1 series lead. He has stopped 59-of-62 shots for a .952 save percentage over the two wins.

The Crunch are hoping to keep their season alive tonight, and avoid their first three-game losing streak since they dropped three straight to the Rocket in February. Thursday’s Game 3 loss was only the Crunch’s third defeat following a loss since then; they are 11-2-1-0 in those instances in that span.

Tonight marks the seventh elimination game for the Crunch under head coach Ben Groulx; they are 3-3 in those games since 2017.

In order to stave off elimination this afternoon, the Crunch must win at Place Bell for the first time this season. They are 0-4-1-0, including the playoffs, in Laval this season and they’ve lost seven straight matches at Place Bell since the start of the 2019-20 season. They have not scored more than two goals in any of those seven losses, totaling just 11 goals in seven games.

The Crunch’s last victory at Place Bell was March 13, 2019. In that game, Gabriel Dumont score the game-winning goal early in the third period and Alex Barré-Boulet helped preserve the win with an empty-net tally in the final minute of the game. They are the only two players on the Crunch’s current roster who played in that game.

HOPING TO BREAK THROUGH

The Crunch’s three leading regular season scorers—Alex Barré-Boulet, Gabriel Dumont and Charles Hudon—have been held in check by the Rocket through the first three games of the North Division Semifinals. The trio combined for 182 points during the regular season, but they have just two assists in three games so far in the playoffs.

Dumont and Hudon both tied for the Crunch lead with 30 goals during the season. Dumont is searching for his first point of the 2022 playoffs and Hudon has notched one helper. Those two contributed 11 points (9g, 2a) during the regular season series.

After scoring twice in four chances with the man advantage in Game 1, the Crunch have gone 0-for-8 over the last two games. They are 2-for-12 (16.7%) in the series.