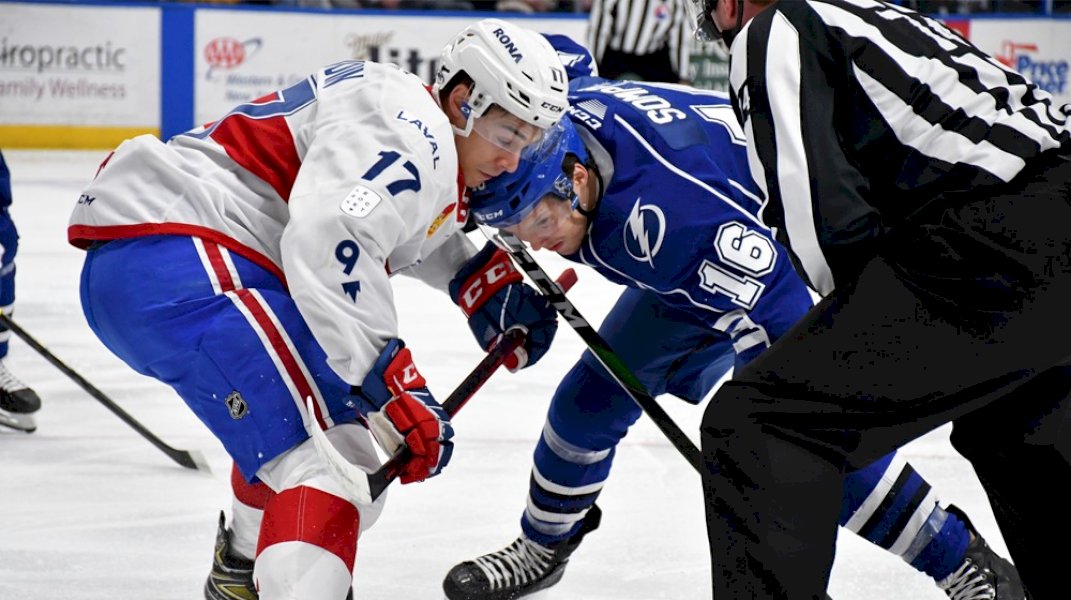 CRUNCH AND ROCKET FACE OFF IN GAME 2

The Crunch and Laval Rocket meet up in Game 2 of the North Division Semifinals tonight at Upstate Medical University Arena.

The Crunch grabbed a 1-0 series advantage with a 5-3 win in Game 1 last night. Syracuse is 7-6 all-time in playoff series after winning Game 1.

Last night was Laval’s first ever playoff game in franchise history. The Rocket look to even the best-of-five series before the scene shifts to Place Bell.

HOW IT SHAPES UP

The North Division Semifinals between the Crunch and Rocket follows a 2-2-1 series format. The winner of the best-of-five series advances to face off against either Utica or Rochester in the North Division Finals.

After tonight, the series transitions to Place Bell in Laval for Game 3 next Thursday, May 12. If there is a Game 4, that would also be in Laval Saturday, May 14 and then a winner-take-all Game 5 is lined up for Syracuse Tuesday, May 17.

Laval opened the scoring on a power-play goal from Alex Belzile 4:11 into the opening period. He cashed in on a rebound for Laval’s first ever Calder Cup Playoffs goal. Remi Elie quickly responded for the Crunch, converting off a Rocket turnover at 5:54. The Crunch took their first lead of the series late in the first period when Cole Koepke deflected an Anthony Richard shot for a power-play goal and a 2-1 Crunch lead.

Richard extended the Crunch advantage to 3-1 with a rebound strike 1:08 into the second period. Joel Teasdale got that one back at 15:19 of the period, but again the Crunch answered. Gemel Smith batted a rebound out of the air for the Crunch’s second power-play goal and a 4-2 lead. Belzile’s second goal of the night cut the score to 4-3 early in the third, but the Crunch fended off the Rocket and Richard capped a three-point game with an empty-net goal to send the Crunch to the 5-3 win.

Last night marked the opening game of the Crunch’s 27th playoff series in franchise history. The Crunch improved to 14-13 all-time in Game 1’s of playoff series, including a 4-4 mark under head coach Ben Groulx.

After finishing the regular season on fire, Syracuse continued that play in Game 1 of the North Division Semifinals. In last night’s win, eight different Crunch players registered at least one point, with Anthony Richard leading the way with his three-point (2g, 1a) performance. Alex Barré-Boulet got his name in the box score as well with an assist, bringing his point streak up to seven games (9a) dating back to the regular season.

Last night also marked the continuation of a much-improved power-play unit, with both Cole Koepke and Gemel Smith notching man-up goals. Over the last eight games, the Crunch have converted on 32.3% of their power-play opportunities, scoring at least one power-play goal in seven games.

The Rocket, the three seed in the North Division, come into Game 2 tonight after last night’s Game 1 defeat, falling 5-3. Laval recorded one power-play goal on two opportunities, while allowing Syracuse to score on the man advantage twice over four chances.

Alex Belzile has been at the forefront of the Rocket attack over the past few games. The veteran notched two of Laval’s three goals last night, coming in the first and third periods. It was the first career Calder Cup Playoffs game for Belzile, despite eight seasons in the AHL; he did skate in six Stanley Cup Playoff games for Montreal in 2020.

Kevin Poulin started Game 1, turning aside 26 of the 30 shots he faced. It was the most goals allowed against Syracuse all year for Poulin, who went 18-8-3 with a 2.34 goals-against average and a .920 save percentage in 33 regular games. He allowed five total goals in four appearances against the Crunch during the season.

THE HOUSE THAT MAX BUILT

Max Lagace’s 28-save performance last night helped continue his dominance in front of the home crowd. The Quebec native has won 13 consecutive starts in Upstate Medical University Arena, registering a 1.53 goals-against average and three shutouts during that stretch.

The Crunch netminder was awarded AHL Goaltender of the Month for April after going 9-1-1. Including last night, he’s now 18-2-2 in his last 22 decisions dating to March 9. Lagace’s Calder Cup Playoffs record now stands at 3-3; last night was his first postseason win since May 25, 2019. He’s made a total of seven playoff appearances dating back to 2016, accumulating a 2.83 goals-against average.

Crunch forward Remi Elie has been a points machine lately. The Canadian put one in the back of the net last night, good for his 18th goal of the year between the regular season and playoffs. Elie has now logged five points (4g, 1a) over his last five games.

The former second round pick collected three goals and two assists during the final two weeks of the regular season for the Crunch, while posting a +8 rating during those final six games. This continues what’s been a solid 2021-22 campaign for Elie, who set regular season career-highs in both goals (17) and points (29) during his first year in Syracuse, despite being limited to 48 games due to injury. Elie has skated in 27 career Calder Cup Playoffs games and he went to the Calder Cup Finals with Texas in 2018.