No. 7 women’s hockey rolls on with 5-1 win at SUNY Cortland 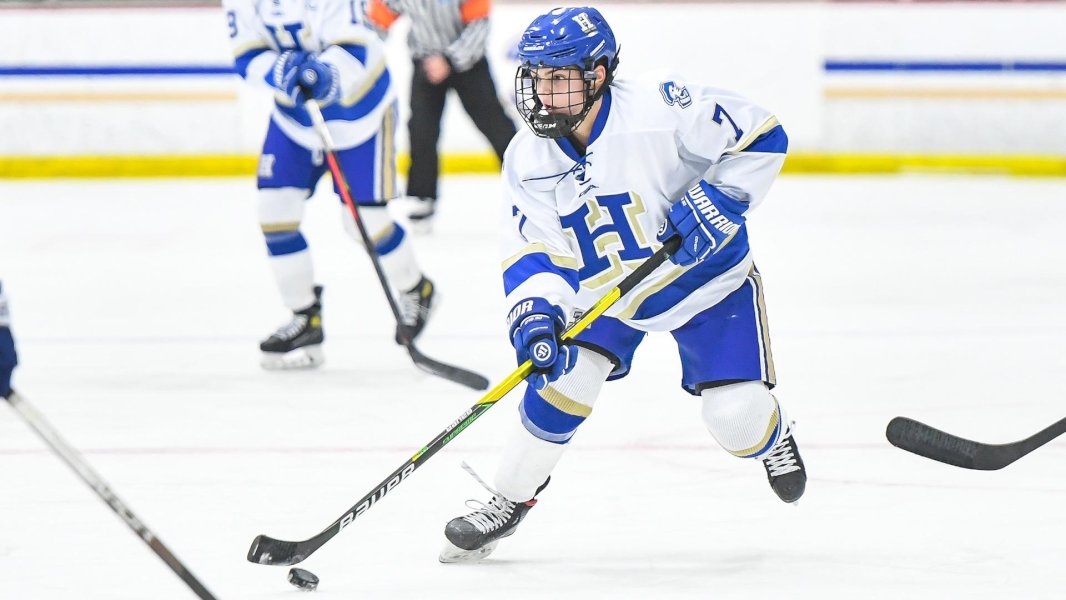 CORTLAND, N.Y. – Hamilton College scored three goals in the second period and the Continentals went on to post a 5-1 non-conference win against the SUNY Cortland Red Dragons at Cortland’s Alumni Arena on Saturday afternoon.

Season Update
Nationally ranked No. 7 Hamilton improved to 12-3-0 overall. The Red Dragons (12-4-0) had won their previous eight games before the Continentals came to town.

Abby Kuhns ’23 gave Hamilton a 1-0 lead with a power-play goal at 5:22 of the first period when she hammered home a one-timer from the point. Jillian Hlasnick tied the score with 7:18 left in the first after sister Mia Hlasnick won a faceoff. The Continentals thoroughly dominated the action from the start of the second period until the end of the third. Hyla Mosher ’23 scored on another Hamilton power play 2:08 into the second. A shot by Kuhns was turned aside, but Mosher’s wrist shot from the left faceoff circle found the back of the net. Allie Curry ’23 gave the Continentals a two-goal cushion at 7:12 of the period. A shot from the slot by Abby Weiss ’25 was stopped, but Curry cleaned up the rebound from the edge of the crease. Claire McGennis ’24 made it 4-1 with 4:13 left in the second. Hamilton had an offensive-zone faceoff in the left circle and Nancy Loh ’23 swiped the puck and skated across the low slot. Loh snapped a low wrist shot from below the right faceoff circle that was deflected in front by McGennis. The Continentals outshot Cortland 14-2 in the second period. Loh clinched the win with a goal at 10:32 of the third period. Katherine Solohub ’23 picked up an assist on the goal.
Notes

McGennis, Kuhns and Loh finished with a goal and an assist each. Loh has a team-high 10 goals and is tied for the lead with Kuhns with 12 points. Loh has 45 career goals. Cate Gallagher ’26 made nine of her 13 saves in the first period. McGennis leads the team with nine assists. Weiss collected her first career point. Abby Smith ’24 and Curry recorded their 20th career point. Mosher has four goals in her last four games. Bobbi Roca ’24 registered her eighth assist this season. Maddie Hong ’23 won 8 of 15 faceoffs. Molly Goergen stopped 21 shots for the Red Dragons during the first two periods. Anna Hamid relieved Goergen and came up with three saves in the third period. Hamilton was 2-for-2 on the power play and killed both of their penalties. The Continentals haven’t allowed a power-play goal since the first game of the season. The Continentals have won four in a row against Cortland. Hamilton has allowed just four goals in its last six games. Cortland received votes in this week’s USCHO.com Division III Top 15 poll.
Next Game
The Continentals play another non-conference contest against Utica University (14-1-1 overall) at the Nexus Center on Tuesday, Jan. 24 at 7 p.m.