No. 7 women’s hockey and No. 13 Utica play to non-conference tie 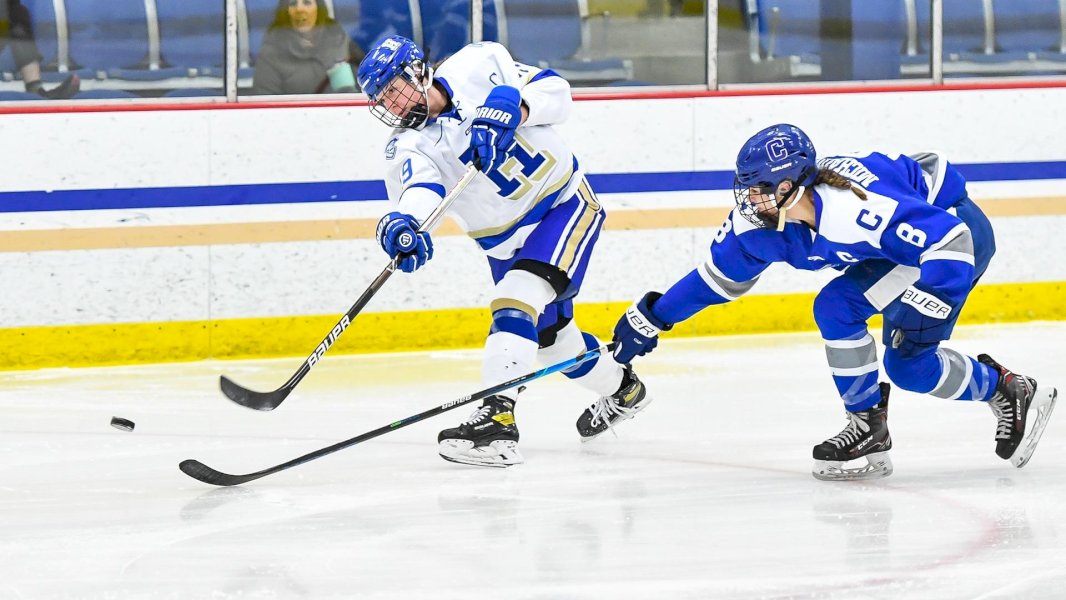 UTICA, N.Y. — Hamilton College’s Abby Kuhns ’23 and Katie Allen ’26 scored goals and the Continentals played to a 2-2 non-conference tie against the Utica University Pioneers at the Nexus Center on Tuesday night.

Season Update
Nationally ranked No. 7 Hamilton (12-3-1 overall) is 7-1-1 against ranked teams this season. No. 13 Utica, which is 11-0-1 in the United Collegiate Hockey Conference, moved to 14-1-2 overall. The Pioneers had won their previous 13 games entering the evening.

The Continentals dominated the action for most of the night, and they were finally rewarded during their second power play at 11:09 of the second period. Kuhns’ shot from the right point found its way through traffic and settled in the back of the net. Abby Smith ’24 and Bobbi Roca ’24 had the assists. Hamilton made it a two-goal advantage 44 seconds later on Allen’s tally. Lydia Bullock ’26 picked up the assist. Utica sliced its deficit in half on its first power play 3:31 into the third period. Maggie Rylott’s wrist shot from the right faceoff circle found the top-right corner of the goal. Hailey Modlin scored the game-tying goal just 34 seconds later on a low shot from the left side that slid along the ice surface and under the goaltender. The teams had an abundance of chances to break the tie the rest of the third period and into overtime. The Continentals were given two power-play opportunities midway through the period, and the Pioneers had one during the last 48 second of regulation and the opening 1:12 of the extra session. Hamilton’s Hyla Mosher ’23 had a breakaway chance late in overtime but her shot banged off the left post.
Notes

The Continentals held a staggering 54-11 shot advantage as Kuhns (11) finished with as many shots on goal as Utica did as a team. Cate Gallagher ’26 needed to make only nine saves, including two in overtime, for Hamilton. Kuhns leads the team with 13 points and has scored a goal in three straight games. Allen, who scored in her first collegiate game back in November, has two goals this season. Roca is tied for the team lead with nine assists. Smith has a point in three consecutive games. Bullock recorded her second assist and third point this season. Maddie Hong ’23 won 15 of 22 faceoffs for the Continentals. Angela Hawthorne turned away 52 shots for the Pioneers. Cortney Staniszewski was credited with an assist on both Utica goals. Hamilton gave up just its second power-play goal in 35 opponents’ chances this season. The Continentals were 1-for-6 on the power play while the Pioneers were 1-for-3.
Next Game
Hamilton hosts Wesleyan University for a NESCAC contest on Friday, Jan. 27 at 7 p.m.

No. 13 Women's Hockey Battles Back to Draw With No. 7 Hamilton – Utica University Athletics