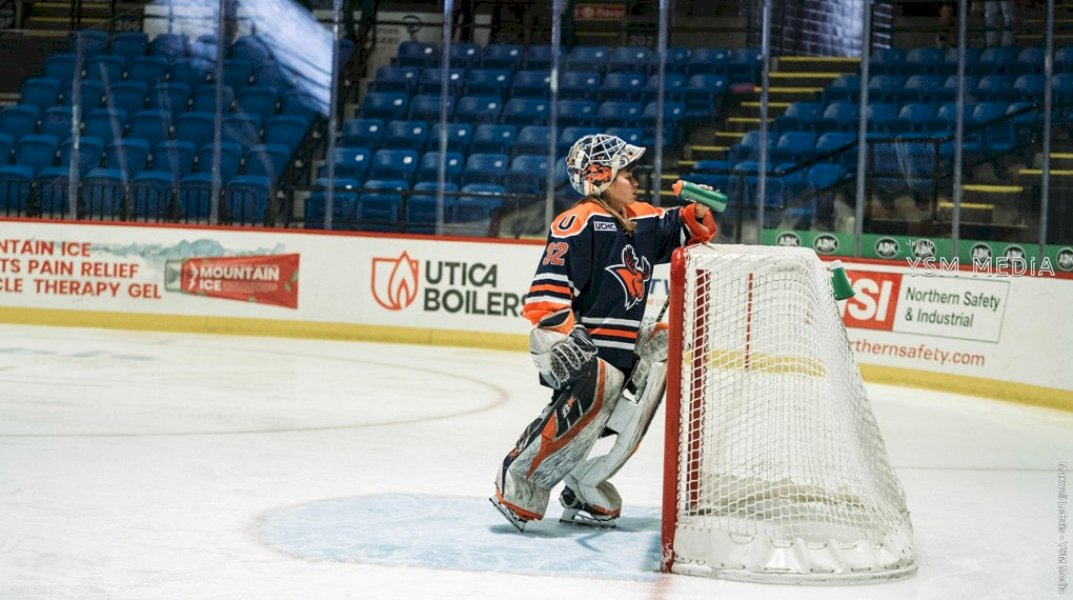 UTICA, NY – The No. 14 Utica University women’s hockey team beat the Alvernia Golden Wolves 4-0 on Saturday afternoon. The win extends Utica’s win streak to seven straight games as the team has been firing on all cylinders.

Utica was aggressive in the first period and kept the puck in the attacking zone. The Pioneers outshot the Golden Wolves 13-2 and were able to create plenty of opportunities. Hailey Modlin (Phoenix, AZ/Boston Shamrocks) got the Pioneers on the board at the 13:23 mark as she was able to rifle one past Alvernia goaltender, Julia Beaven. It was Modlin’s fourth goal of the season and Cortney Staniszewski (Buffalo, NY/Niagara Jr. Purple Eagles) and Hannah Keating (North Andover, MA/HPNA) picked up assists on the play. Modlin has now recorded a point in two of her last three games and Staniszewski extended her point streak to four. Utica took a 1-0 lead into the first intermission.

The Pioneers continued its relentless pressure and at the 4:07 mark in the second period Georgiana Santullo (Woburn, MA/Boston Shamrocks/Woburn High School) found the back of the net for a 2-0 Utica lead. Erica Sloan (Potsdam, NY/St. Lawrence Steel) and Carly Stefanini (Framingham, MA/Brooks School) assisted the goal. Sloan extended her point streak to seven straight games and has recorded a point in nine of the team’s ten games. Stefanini continues her strong weekend as she recorded two points against Alvernia last night.

Utica’s dominance continued entering the final period as just 0:42 into the third period Carolyn Whitney (Raleigh, NC/Milbrook School) found the back of the net. Abby Lillis (West Seneca, NY/Buffalo Bisons) and Holly Silva (Boston, MA/Worcester Academy) assisted the goal to extend the Pioneers lead to 3-0. Utica kept firing as Molly Pedone (Trinity, FL/Robert Morris) scored at the 7:03 mark to make it a 4-0 Pioneer lead. Holly Silva (Boston, MA/Worcester Academy) recorded her second assist of the contest and Ava Suda (Cheektowaga, NY/Buffalo Bisons) also assisted on the goal. Suda has now recorded an assist in back to back games against Alvernia.

The Pioneers were in complete control all game outshooting Alvernia 49-15 and constantly kept the puck in the attacking zone. Holly Silva (Boston, MA/Worcester Academy) led Utica with two points while a whopping ten Pioneers recorded one. Goaltender Angela Hawethorne played terrific, tallying fifteen saves and recorded a shutout in the win.