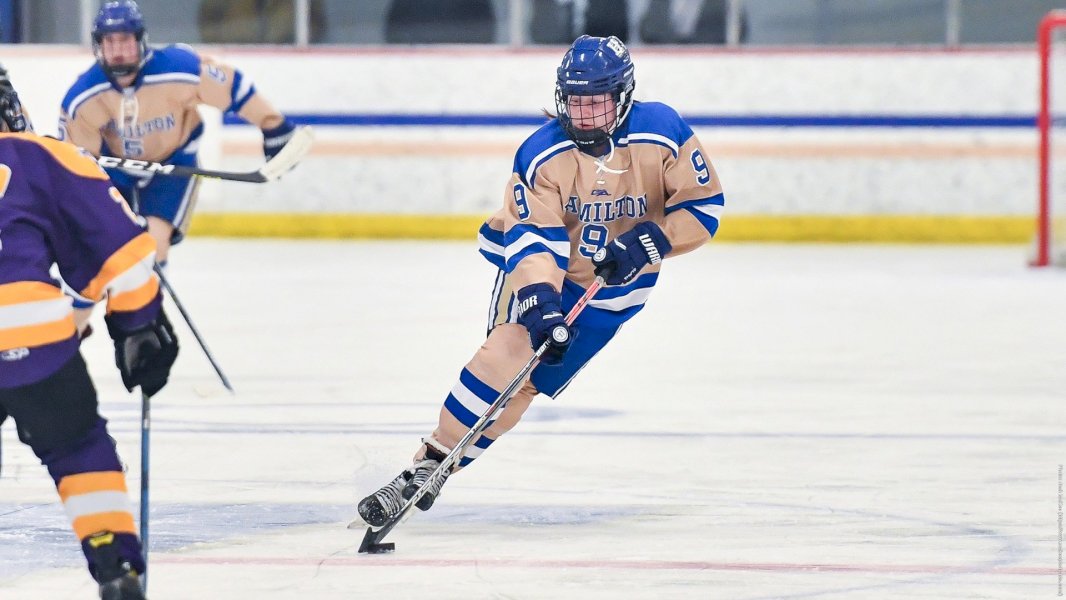 Hamilton College scored three goals in the first period and the nationally ranked No. 13 Continentals posted a 3-1 non-conference win against the SUNY Morrisville Mustangs at Hamilton’s Russell Sage Rink on Tuesday afternoon.

Katie Allen ’26 put the Continentals on the scoreboard 9:30 into the first. Allie Curry ’23 intercepted the puck in Hamilton’s offensive zone and fired a shot that was saved. Mya Berretta ’23 followed up with a shot of her own, but it was blocked by a defender. Allen tracked down the rebound and slid it past Morrisville’s Emma Plett. 64 seconds later, Abby Smith ’24 drove the puck down the ice and chased it around the boards to Sophie Berghammer ’26 who fired the puck into the crease. Hyla Mosher ’23 tipped it to Nina Shaikh ’24 and she snuck it into the lower-left corner. Smith gave the Continentals some breathing room with 5:12 left in the period. Maddie Hong ’23 sent a pass to Emily Ferguson ’24 who drilled it from the slot. Despite chaos in the crease, Smith tracked down the puck and knocked in Hamilton’s third goal. Allie Davidson scored the Mustangs’ lone goal late in the second period on passes from Allicen Bouchard and Kendra Johnston. Morrisville pulled its goaltender for only 11 seconds late in the third period before the Continentals’ offense applied pressure and forced a re-entry. Hamilton recorded 17 shots in the first period alone. The Continentals held a commanding 44-14 shot advantage. The Mustangs won 25 of 45 faceoffs.
Notes

Hamilton (2-1) is ranked 13th in the USCHO.com Division III Top 15 poll. Morrisville moved to 1-7-1 overall. Shaikh scored a goal for the second consecutive game. Smith netted her first goal this season and the fifth of her career. Berretta dished out her second assist of the season. Curry, Mosher, Berghammer and Ferguson all tallied their first assist of the season. Mosher won 7 of 13 faceoffs. Bobbi Roca ’24 won 6 of 7 faceoffs and led the Continentals with two blocked shots. Cate Gallagher ’26 made her first start in goal and earned the win with 13 saves. Morrisville’s Maggie Jones collected 27 saves during the last two periods.
Next Game

Hamilton returns to Sage Rink on Sunday, Nov. 27 for another non-conference matchup against SUNY Oswego (5-3-0) at 3 p.m.
Visit Source