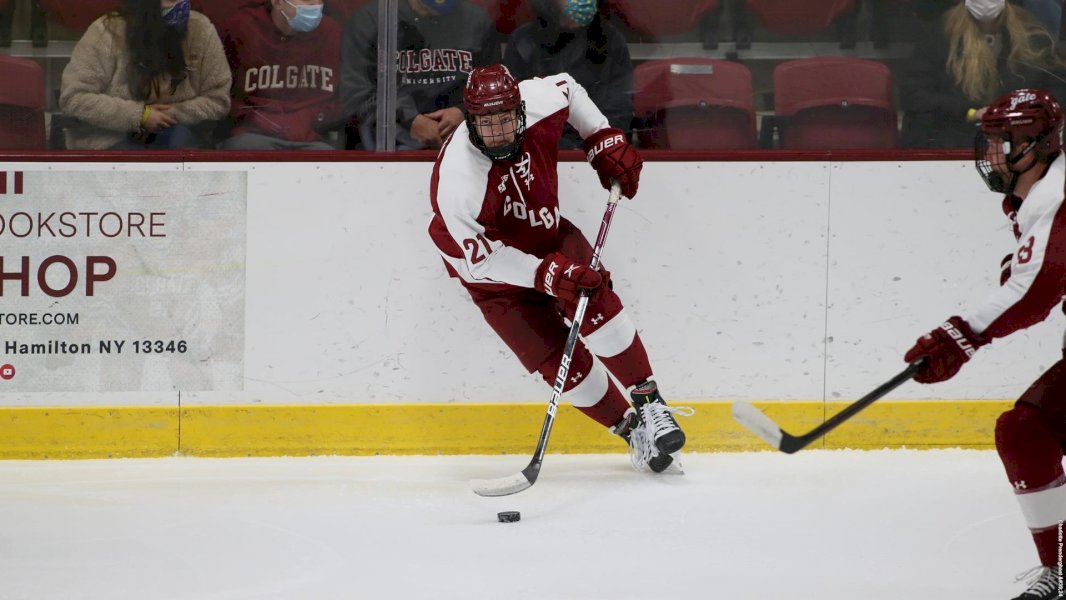 In the first of two meetings between the teams this weekend, Colgate started the night red-hot with five unanswered goals to open a 5-0 lead midway through the second period.

But the lead wasn’t quite as comfortable after WMU scored two late in the second and the visitors carried momentum over to the third with four more goals.

Two of Colgate’s six shots in the first period found the back of the net. Pierson Brandon scored 19 seconds into the game before Colton Young netted his team-leading seventh goal of the season to build a 2-0 lead at the first intermission.

The Raiders scored three more in the second, all coming on the power play. Ethan Manderville hammered home his own rebound and Matt Verboon rifled a one-timer on a 5-on-3 to double the lead midway through the frame.

Colgate’s final goal of the night was a pretty tic-tac-toe, with Alex Young serving as the beneficiary on assists by Nick Anderson and Verboon to push the lead to 5-0 with just over eight minutes left in the second period.

WMU finally cracked the scoreboard with 2:37 showing in the second and that turned the table. The Broncos added another less than a minute later to cut the deficit to 5-2.

WMU controlled the third period from the get-go, outshooting Colgate 22-7 and outscoring the Raiders 4-0 over the final 20 minutes. Ronnie Attard tied it at 5-5 at the 14-minute mark and then scored the game-winner with just over a minute left in regulation to cap off his hat-trick and seal the comeback 6-5 victory.

C. Young led the Raiders with a three-point night behind a goal and two assists. Verboon and Manderville each registered a goal and an assist, while Carter Gylander finished with a season-high 47 saves in net.

“Western Michigan is a very good team. I thought their experience really showed tonight. We had a game plan that we executed very well for two periods. The two late goals in the second gave them confidence going into the third. Obviously our special teams were very good tonight but we didn’t battle hard enough 5-on-5 to get position in front of our net. The puck took some funny bounces for sure but that happens and when it does you need to continue to do your job and box out so the offensive player can’t get inside position. That happened on at least four of their goals tonight. Playing defense is hard work and we will need to be much harder to play against in our own end tomorrow.”

Colgate and WMU complete their weekend series on Saturday when the two teams face off at 5 p.m. at Class of 1965 Arena. ESPN+ is carrying the live stream.