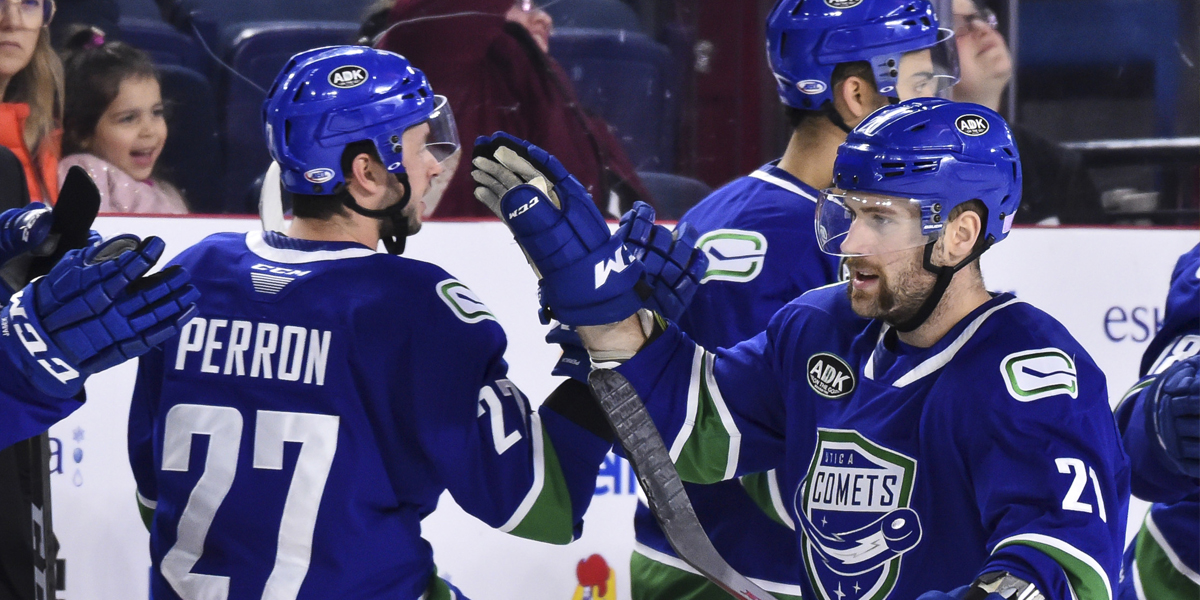 The Utica Comets traveled to Laval, Quebec over the weekend to take on the Rocket in a pair of games. After 6-3 losing Friday night, Nikolay Goldobin recorded a hat-trick in a 4-2 win Saturday.

The Comets struck first to take a 1-0 lead, but would ultimately fall to the Rocket 6-4 Friday night.

Laval native Francis Perron accepted a pass from Carter Camper before a firing the puck on net. His initial shot was stopped. He cashed in on his own rebound for a 1-0 lead with the power-play goal. The Rocket scored late in the period tying the game before heading to intermission.

Laval scored two more in the second period before adding one more at 2:21 in the third to take a commanding 4-1 lead. Lukas Jasek scored at 5:15 assisted by Jonah Gadjovich and Camper to get the Comets back within two. The Rocket extended their lead to 6-1 on goals at 5:55 and 6:56. Camper and Gadjovich attempted the comeback, but it wasn’t enough and the Comets would fall 6-4 in this one.

Zane McIntyre was in goal for Utica and finished with 26 saves.

Nikolay Goldobin scored a hat-trick and Michael DiPietro made 41 saves in a 4-2 Utica Comets victory in Laval Saturday night.

Gadjovich extended his scoring streak to three games thanks to his 1-0 goal in the first period. Kole Lind fired a pass through the slot that deflected off Gadjovich and into the net.

Goldobin scored his first of the night on a power-play at 3:41 of the second with assists going to Camper and Lind. The Rocket closed out the period by scoring twice evening the score at 2-2.

The Comets regained their lead at 8:41 after Gadjovich scored his second of the night from a tough angle. He capped off the hat-trick with an empty goal at 19:39 of the period. DiPietro finished with 41 saves on the net.

The Comets return home Wednesday night on the eve of Thanksgiving as they host the Syracuse Crunch. Puck drop is at 7pm.