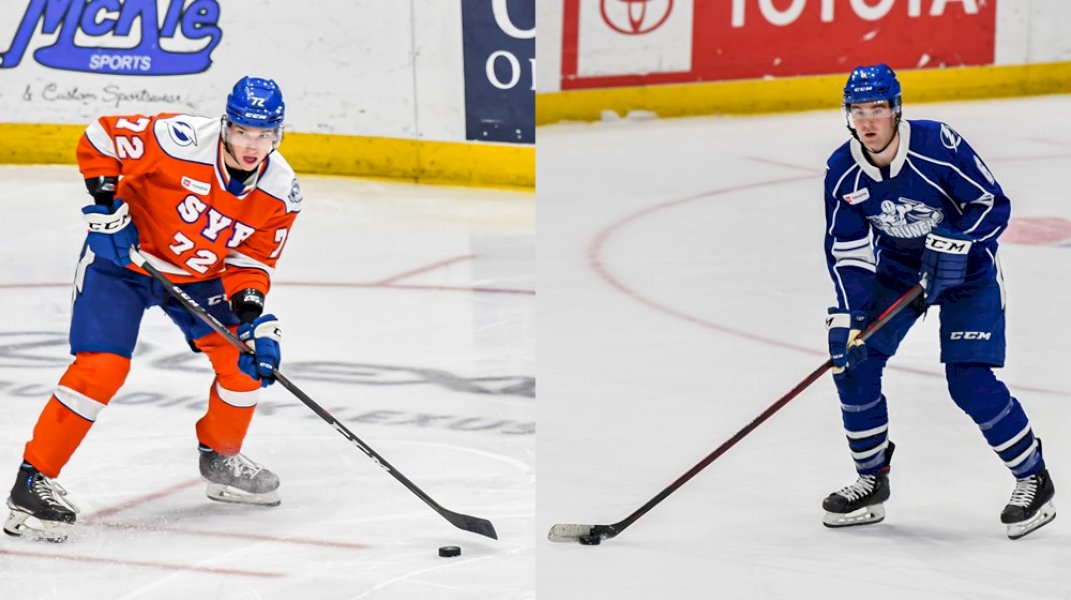 The Syracuse Crunch have been one of the hottest teams during the last few months of the regular season. After winning nine of their 14 games in March and climbing up the standings, the team knew April would determine their playoff status. The team maintained their momentum, winning 11 of their 15 games, and securing a second-place finish in the North Division. On top of that, the Crunch set a new franchise record with a 12-game home winning streak and Head Coach Ben Groulx became the winningest coach in team history.

Part of the late-season success are the two newest additions to the Crunch squad – defensemen Nick Perbix and Declan Carlile – who both signed ATOs with the Crunch after inking their entry-level contracts with the Tampa Bay Lightning following the completion of their collegiate hockey careers.

“They step on the ice, and the first thing you see is them working hard,” said Groulx. “Those two, I’m sure they’ll find a way to help us out down the road.”

From their youthful energy to Perbix’s playmaking skills and Carlile’s ability to stop the opposing offense, these two have become a force to be reckoned with. Coach Groulx compliments their transition to professional hockey, and their arrival time.

“They bring us depth with the loss of San Day. We needed that. It’s good to see we have more depth on the team now.”

A visible element to the Crunch’s success is their team chemistry. Joining the team after the completion of their collegiate seasons, Perbix and Carlile have been welcomed. From cards to the infamous ping pong games, the two have been welcomed into the bonding time that helps makes the Crunch who they are.

“They definitely make sure to include you in everything, which is nice,” Perbix said.

Growing up in the hockey hotbed of Minneapolis, Minnesota, it was only a matter of time until Perbix laced up skates. He played at Elk River High School, the same breeding grounds for multiple NHL players, such as Joel Otto and Paul Martin. A four-time letterwinner in hockey, Perbix accumulated multiple accolades, including being named a Minnesota Mr. Hockey finalist, given to the best high school player in the state.

After high school, Perbix spent some time with the Omaha Lancers of the USHL (United States Hockey League), where he displayed his playmaking skills recording four goals along with 27 assists. From there, Perbix moved to St. Cloud State, where he established himself as one of the top offensive defensemen in the nation, while leaving his name amongst the best players in program history.

Perbix became a key part in the Huskies’ 2021 NCAA Tournament run, where he blocked six shots in four games as the Huskies earned a spot in the national championship, eventually losing to the University of Massachusetts, finishing out their best season in program history. That season, Perbix was named First Team All-NCHC and runner up for NCHC Offensive Defenseman of the Year.

“St. Cloud’s a very tight group. We’re a family, we don’t just say that we mean it,” Perbix said.

Perbix most recently represented the United States in the 2022 Winter Olympics in Beijing. Perbix tallied an assist in the 3-2 quarterfinal loss against Slovakia, giving the U.S. a 5th place finish.

“There’s nothing like it, I never really pictured myself playing in the Olympics,” Perbix said. “It’s an honor putting on the red, white, and blue, and it’s something I’ll never forget.

Carlile also followed the collegiate route that eventually brought him to the Crunch.

Growing up in small-town Hartland, Michigan, hockey was everything for Carlile. With a pond in the backyard, his father purchased spotlights so he and his two younger brothers could play on their own rink at night.

When he first started hockey as a forward, he rooted for NHL legend Mats Sundin, and remembers his father purchasing tickets to Sundin’s retirement night. But eventually, Carlile switched to blueliner and began emulating Morgan Rielly, currently on the Toronto Maple Leafs. It was during this transition that Carlile found his passion for defense.

“It’s something I take pride in, I love going out there on the kill,” Carlile said.

After experiencing success at Indiana’s Culver Academy, Carlile entered the Ontario Junior Hockey League (OJHL). He played a key role in his team winning the Buckland Cup and finishing as the national-runner up in the CHL RBC Cup.

Carlile split the 2018-19 USHL season playing for both the Lincoln Stars and Muskegon Lumberjacks. He was part of Muskegon’s regular-season conference title and Clark Cup conference finals appearance.

From there, Carlile transitioned to Merrimack College. While playing for the Merrimack Warriors, he worked his way into becoming an established defenseman with a knack for blocking shots. Carlile experienced success at Merrimack as a finalist for the Hockey East Rookie of the Year award in 2019-20, and a Hobey Baker award nomination in 2020-21, given to the nation’s top player.

During his sophomore year in 2020-21, one shortened by the COVID-19 pandemic, Carlile led the nation in blocked shots per game with 3.14.

Carlile keeps close contact with his teammates and coach, Scott Borek, who implemented the value of competing and giving it your all.

“I couldn’t have gotten anywhere without them, they’re all great people and I couldn’t be more appreciative of them,” Carlile said.

Four days after his final collegiate game, the Tampa Bay Lightning signed Carlile to an entry-level contract and he reported to the Syracuse Crunch on an ATO – a moment he’ll never forget.

“It was a pretty surreal moment,” Carlile said. “Even after I signed it, I didn’t even realize how cool it was and how much it meant to me.”

With the Crunch preparing for the 2022 Calder Cup Playoffs, both players have the potential to play key roles in what the team hopes is a long run

“I haven’t been here very long, but I think we’ve got to play our game,” Perbix said. “Because when we do, we’re a very good hockey team. I think that we’ve proven that lately.”