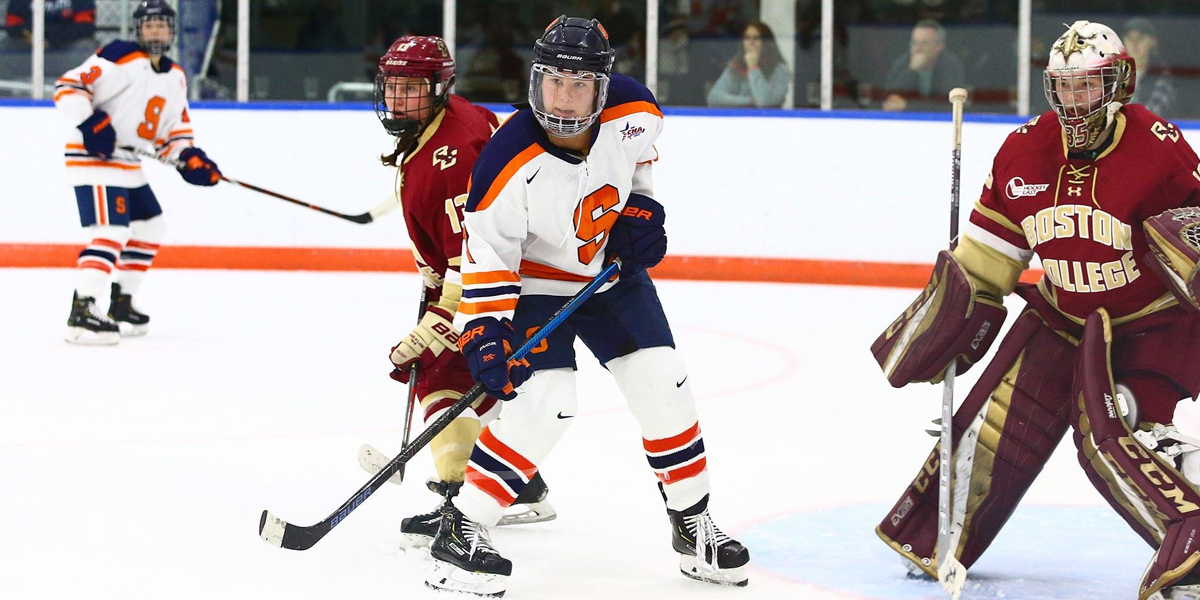 After a fairly defensive minded start to the game by both teams things started to open up around the halfway point of the first. Not long after that, Eleri MacKay took a pass from her twin sister Delani MacKay and fired home the one-timer for a 1-0 lead.

Mercyhurst took advantage of an early power-play to tie the game at 1 only 2:12 into the second. However, at the other end of the period Colgate regained their 1 goal lead. Maggie MacEachern chipped the puck out of the defensive zone where Sammy Smigliani picked it up. She eventually found Noemi Neubauerova in the slot who one-timed the puck under the bar for the game winner.

Colgate finished off the game with a strong third period only allowing Mercyhurst two shots on goal. Colgate goaltender Liz Auby finished with 17 saves and her second win of the season.

The Raiders came out flying looking for the weekend sweep at Class of 1965 Arena. They got on the board first at 5:08 of the first when the twins converted on a nice give and go play. Delani MacKay fed the puck to her sister, Eleri MacKay, before b-lining it to the slot where she jammed home the return pass from Eleri. Tanner Gates also recorded an assist on the play.

Carolie Larose scored at 1:54 of the second to double the Raiders lead when she one-timed a pass from Danielle Serdachny into the back of the net.

Here's the great setup from Serdachny to Larose!#WePlayFree #GoGate pic.twitter.com/MJRDrf2EcG

Mercyhurst responded with two goals of their own at 3:12 and 5:43 to even the score. The Raiders entered the third period with a 3-2 lead after Darcie Lappan scored her first career goal at the 15:49 mark. Shelby Wood and Neubauerova assisted on the play.

Mercyhurst was able to tie the game up midway through the third period. Colgate outshot the Lakers 5-2 in overtime, but this one ended in a 3-3 tie. Auby finished with 34 saves.

Up next for the Raiders is a home-and-home against the Syracuse Orange Friday, October 18th and Saturday October 19th.

Syracuse played it’s third game in a row against a ranked opponent and once again hung in there with a top 10 team. The Eagles scored the only goal of the first period at 4:37 then added to their lead at 6:23 of the second.

Digirolamo roofed one over the head of the BC goaltender at 7:16 of the period assisted by Kristen Siernachesky. Anonda Hoppner scored a power-play goal at 18:21 bringing the Orange within one goal, but could not find the equalizer. Maddy McArthur finished with 33 saves for Syracuse.