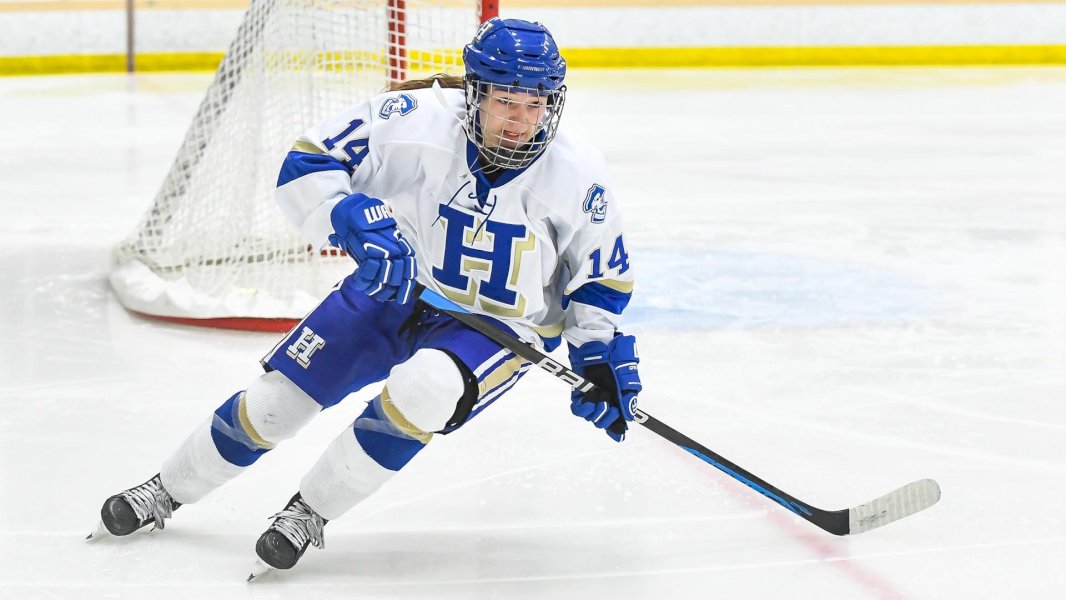 Season Update
The nationally ranked No. 6 Continentals (10-2-0 overall) extended their team-record win streak to eight games. Nazareth, which is 10-0-0 in the United Collegiate Hockey Conference, dropped to 11-3 overall.

Mya Berretta ’23 gave Hamilton a 1-0 lead with 6:38 left in the first period when she scored on a wraparound after a shot by Sami Quackenbush ’24 was deflected wide of the net. Abby Flanagan tied the score after she jammed in her own rebound with 5:01 remaining in the first. Nancy Loh ’23 put the Continentals in the lead for good at 11:35 of the second period. Two quick passes by Bobbi Roca ’24 and Claire McGennis ’24 set up Loh for the goal from point-blank range. Mosher gave Hamilton a two-goal cushion at 4:41 of the third from the right side near the crease where she redirected a hard pass by Berretta. Mosher finished off the Golden Flyers with 3:07 to go when she poked the puck across the goal line from a scrum in front of the net.
Notes

Mac Donovan ’26 made 26 saves, including 15 in the third period, in her first collegiate start for the Continentals. Mosher recorded her first multi-goal game since Feb. 11, 2022, when she had a hat trick against Wesleyan. Berretta leads Hamilton with 10 points on five goals and five assists. Loh has scored at least one goal in her last six games and leads the team with eight. She has 43 in her career with the Continentals. Abby Smith ’24 had two helpers in a game for the second time in her Hamilton career. McGennis and Roca are tied for the team lead with seven assists. Both teams were 0-for-1 on the power play. The Continentals’ last six wins have all come against ranked teams. Maika Paquin, who hadn’t allowed a goal in four previous starts, stopped 30 shots for Nazareth.
Next Game
Hamilton returns to NESCAC competition on Friday, Jan. 13 when the Continentals face off with Williams College at Sage Rink. The first puck drops at 7 p.m.