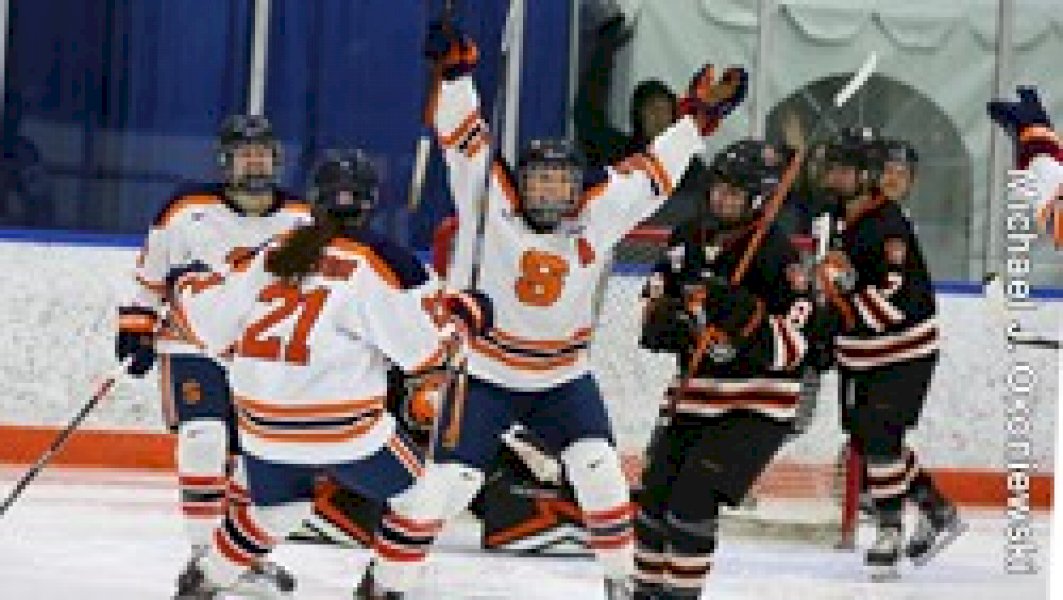 Senior Abby Moloughney recorded her first career hat trick to send the Orange into the 2022 College Hockey America championship game. Syracuse’s 3-2 overtime win against RIT on Friday at Tennity Ice Pavilion puts the Orange in the CHA championship game for the ninth time and the second year in a row. The #1 seed Orange will play #3 seed Mercyhurst for the title. The Lakers beat #2 seed Penn State, 4-2. The game will be streamed on Stretch.

“Kudos to our kids. We were resourceful in terms of generating a lot of chances,” said head coach Paul Flanagan. “For us to get over the hump and get to the championship game was good for us today. We have a very determined group. We have fifth year players and seniors that are a really good group. They were not going to let this slip away. There was never any panic in the locker room in between periods or on the bench. They stayed the course and kept doing what we’ve been doing.”

Syracuse wasted no time in taking a lead. Senior Abby Moloughney scored just 32 seconds into the first period to give the Orange a 1-0 advantage. Moloughney one-timed a rebound into the back of the net. Graduate student Jessica DiGirolamo and senior Victoria Klimek assisted on the goal.

RIT tied the game on a power play goals with less than eight left in the second period and took a 2-1 lead two minutes into the third period.

Moloughney scored her second of the game less than four minutes later to tie the score, 2-2, to force overtime. DiGirolamo set up the second goal, as well.

At the 13:46 mark of the overtime, Moloughney scored the game-winner, on assists from sophomore Hannah Johnson and junior Mae Batherson. It was Syracuse’s 11th overtime game of the season.

Moloughney, who is one of four Orange in the Syracuse 100 Point Club, is tied for second on the Syracuse careeer goals record list with 45 and has 104 career points. DiGirolamo has 61 career assists, which is second in Syracuse history, and 94 points, which ties for fourth on the Orange all-time list.

Tickets for the 2022 CHA Championship can be purchased on game days at the Tennity Ice Pavilion box office. Daily tickets are $10 for adults and $5 for children and students. Parking is available, free of charge, in the lots around Tennity Ice Pavilion, including the Softball Stadium Lot, 621 North Skytop Lot and 621 South Skytop Lot.