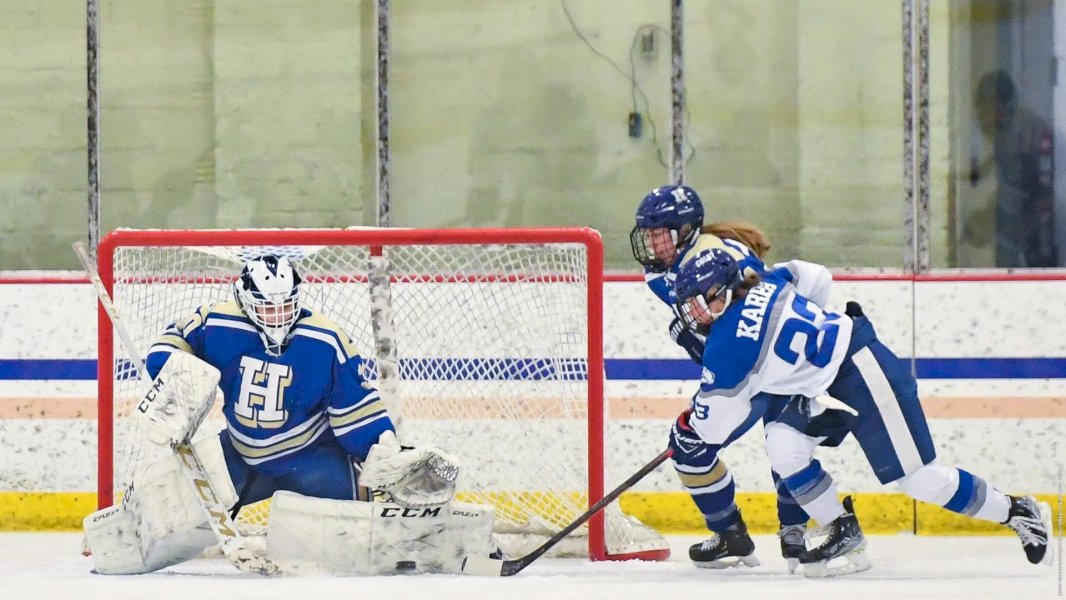 The Continentals improved to 10-8-0 overall and 7-7 in the conference. Hamilton is 5-0-1 in its last six games against Wesleyan, including a 5-2 victory at Sage Rink on Friday night. The Continentals travel to Connecticut College for another NESCAC game on Friday, Feb. 18 at 7 p.m.

Molnar, Gab Venne ’22 and Jess Haviland ’22 were honored before the game as part of a Senior Day ceremony. Venne was awarded the start in goal Friday night against Wesleyan and made 18 stops.

Mya Berretta ’23 finally broke the ice for Hamilton with 1:33 left in the second period. Berretta received a pass from Claire McGennis ’24 at neutral ice behind the Cardinals defense and went in alone on Halloran on a breakaway. Berretta deked Halloran as she faked a shot on her forehand before scoring on her backhand with Halloran defenseless on the ice. The goal is Berretta’s fourth this season. McGennis picked up her sixth assist while Sami Quackenbush ’24 collected her seventh.

Abby Smith ’24 made it 2-0 at 5:26 of the third period. Hyla Mosher ’23 won a faceoff in the Continentals’ offensive zone and eventually made a centering pass to Smith in the slot. Smith stuffed the puck past Halloran for her fourth goal. Mosher earned her 10th assist and Nancy Loh ’23 recorded her team-high 11th helper.

Wesleyan still trailed by two goals late in the third period, so they removed Halloran for an extra skater with just under a minute to go. Isabelle Allieri rang the crossbar with a shot a few seconds later, and then she pulled the Cardinals within one on her goal with 39.5 seconds remaining. Brigitte Goeler-Slough had the assist. Halloran went to the bench again shortly after the ensuing faceoff, but no more shots were attempted, and Hamilton escaped with the one-goal victory.