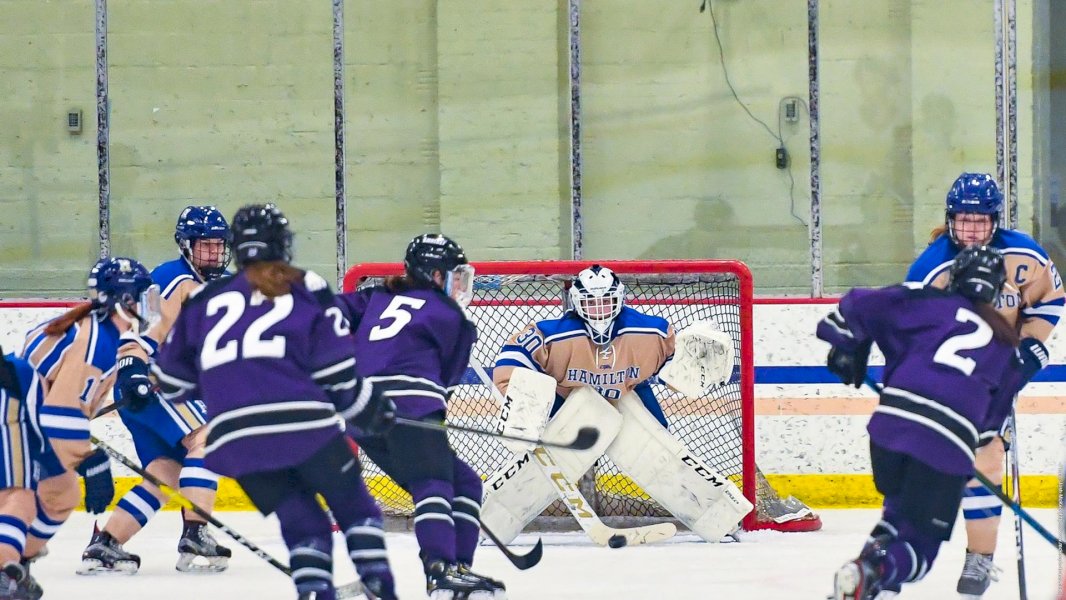 Hamilton College’s Sidney Molnar ’22 made 32 saves and the Continentals posted a 4-0 NESCAC win against the Bowdoin College Polar Bears at Bowdoin’s Watson Arena on Friday night.

The game was the Continentals’ first after a month-long winter break as Hamilton improved to 6-3-0 overall and 3-2 in the conference. The two teams play again in Brunswick, Maine, on Saturday, Jan. 8 at 3 p.m.

The Polar Bears dropped to 4-5-0 overall and 1-4 in the conference. Dani Marquez made 27 saves.

Molnar, who made 15 saves in the third period, posted her second shutout this season and the fifth of her career. She owns a 1.57 goals against average and .941 save percentage. The Continentals also blanked Saint Michael’s College 7-0 back on Dec. 11.

Hamilton opened the scoring on an early power play. Maura Holden ’23 grabbed the puck in the corner before cycling it to Abby Kuhns ’23 at the blue line. Kuhns moved forward and shot the puck, but a Bowdoin defender blocked it before it reached the net. Claire McGennis ’24 collected the loose puck and tucked it behind Marquez at 4:33 in the first period. Kuhns leads the team with seven assists.

Maddie Hong ’23 doubled the Continentals’ lead with 23 seconds left in the first. The play began with Hyla Mosher ’23, who passed the puck from the corner to Lisa Ito-Bagshaw ’25 at the left faceoff circle dot. Ito-Bagshaw shot the puck, but a Bowdoin defender blocked the shot and tossed it to the center to relieve pressure in front of the net. Hong was able to corral the loose puck and took a diving shot that slipped over Marquez’s left shoulder.

Zoe Katz ’24 scored on a 2-on-1 break with 5:10 remaining in the second for her first Hamilton goal. Abby Smith ’24 took control of the puck at the Hamilton blue line and zipped up the center of the ice with Katz on the left wing. Smith slipped around a defender as she entered the zone and passed the puck across to Katz. Her shot beat Marquez across and made it 3-0.

Nancy Loh ’23 scored the final goal off a breakaway at 4:37 in the third period. Loh intercepted the puck at the Bowdoin blue line and skated down the center of the ice. In front of the crease she shifted to her backhand and tossed the puck to the top of the net for her team-leading seventh goal and 11th point.