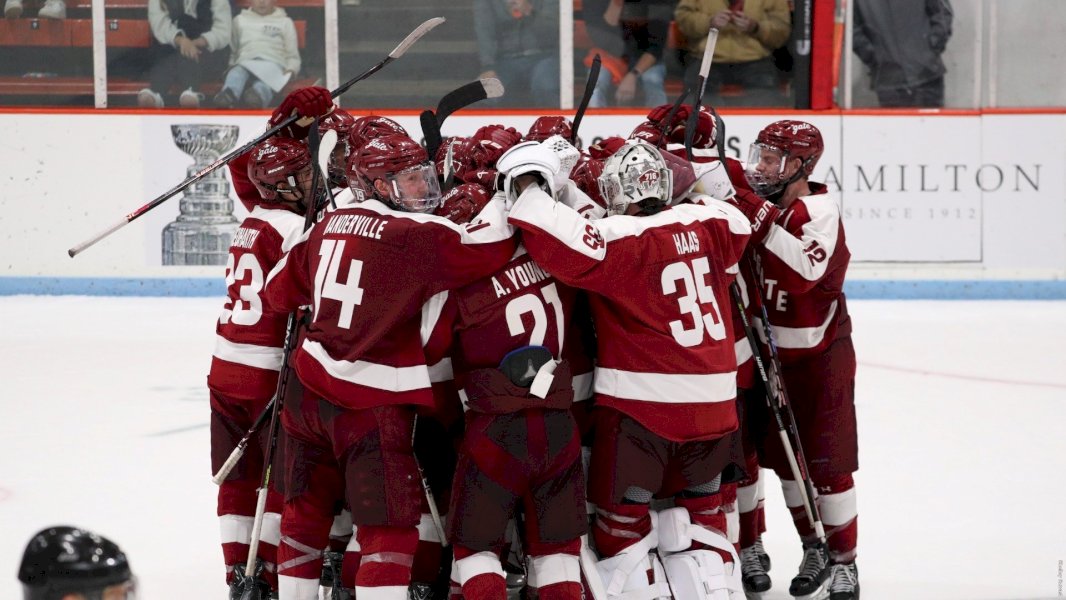 PRINCETON, N.J. — Ross Mitton scored the overtime game-winner to help Colgate to its first conference win of the season over Princeton by a score of 4-3.

The Raiders trailed three different times throughout the game, continuing to fight back and equalize.

Mitton scored the game-winner 57 seconds into overtime. Colton Young passed to Nick Anderson, who played the puck up the ice to Mitton. The junior skated from the left side of the ice into the middle. He then ripped a shot from inside the blue line into the net. The goal continued a hot streak for Mitton, as he has scored in three of the Raiders’ last four games.

With under seven minutes remaining in the third, freshman Simon Labelle scored his first career goal to tie the game up at 3-3. After the puck got loose in front of the net, Labelle scooped it up, skated back, and fired a shot into the left-side netting. The goal came seven minutes after Brendan Gorman scored off passes from Liam Gorman and Ian Murphy to put the Tigers back ahead.

Two minutes into the third, Colton Young found the back of the net to knot the game up at 2-2. Alex Young picked up the puck after a scrum against the boards and tapped it to Ethan Manderville, who played a short pass to Colton for a shot he finished off from close range.

Prior to Young’s goal, Jack Croin scored a power play goal at the 12:52 mark of the second to put Princeton back in control.

In the first, Nic Belpedio tied the game up at 1-1 with just over five minutes remaining. Labelle passed to Belpedio for a shot he riffled into the back of the net from just inside the blue line. The goal was the defenseman’s second of the season.

The Tigers got on the board when they scored just over six minutes into the game. Liam Gorman stole the puck from a Raider defender and got free on a breakaway before tucking a shot under the pads of Carter Gylander.

Despite the early goal, Gylander had a solid first period making 16 saves. The junior finished with a total of 33 saves in the game.

Colgate recorded 26 shots in the game and won the battle in the faceoff circle, going 29-56.

“We always say that it’s never easy to win in this league, and tonight that was certainly the case. Princeton played a great game, and Carter had to make some big stops to keep us in it. I liked how we competed in the third period and the composure the guys showed after they pulled ahead. Simon LaBelle scored his first as a Raider, and it came from a mad scramble at the net. Those are gritty goals. What can I say about Ross Mitton? He is in the zone right now. So, I should probably just get out of his way. He’s stepping up in a big way. All in all, it was a good gritty win.

We will enjoy the ride home and get ready to go back to work Monday. It doesn’t get any easier with a trip to the North Country coming up next weekend.”

Colgate remains on the road for its next set of conference games, traveling to Clarkson (Nov. 11) and St. Lawrence (Nov. 12). Both games are slated for 7 p.m.
Visit Source