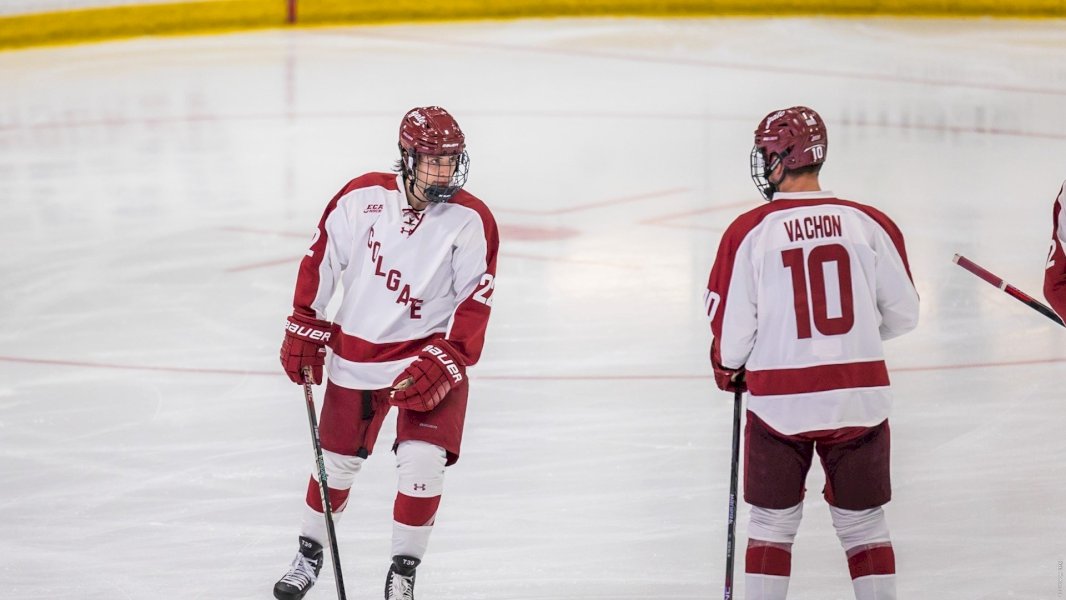 The Warriors’ first goal came just under eight minutes into the opening period. Alex Jefferies fed a pass to Max Welsher, who slipped a shot past Carter Gylander to put Merrimack up 1-0.

Despite giving up the early goal, Gylander put on a strong performance in the first, tallying 17 saves. The junior finished with 33 stops in the game.

The Raiders got called for their first penalty of the night with 3:30 remaining in the first. It came after Ben Raymond got called for hooking. Colgate’s penalty kill unit held strong denying the Warriors a scoring opportunity.

Colgate went on its first power play at the 15:57 mark of the second after Merrimack got hit with a slashing penalty, but the Raiders could not get anything going. Nic Belpedio ripped a shot during the man advantage, but it got blocked by a defender.

Shortly after Colgate’s power play, Merrimack doubled its lead. A series of quick passes between Jefferies and Slava Demin led to Ben Brar slotting a wrist shot into the back of the net to make it 2-0 Warriors. Two minutes later, Slava scored a goal of his own to extend Merrimack’s lead to three.

Ross Mitton had a good look at goal during the second as he ripped a shot that hit the post with 12:30 remaining.

Jordan Seyfert topped off the Warriors’ second-period scoring when he put one in off a faceoff with 10 seconds remaining to make it a four-goal game.

In the third, Colgate had a pair of penalties against it, with Ryan McGuire going to the box for tripping and Colton Young getting hit for cross checking. Colgate successfully killed off both, including 30 seconds of five on three.

Nine minutes into the third, Ottoville Leppanen scored off passes from Jefferies and Ian Zivlak, to make it 5-0 Merrimack.

Colgate killed another penalty in the final period as the Raiders’ PK unit did not allow a goal for the fourth-straight game.

The Raiders had one more power play chance of their own with 6:31 left in the game, but they could not cash in.

Colgate tallied 21 shots in the game and went 28-56 in the faceoff circle.

“We got beat tonight by a better team. They outworked us in every area of the game. It’s on me. We were not ready to play and I need to take accountability for that. We  will be better tomorrow.”

The Raiders and Warriors meet again Saturday for the series finale. Puck drop is 7 p.m. at Lawler Rink.