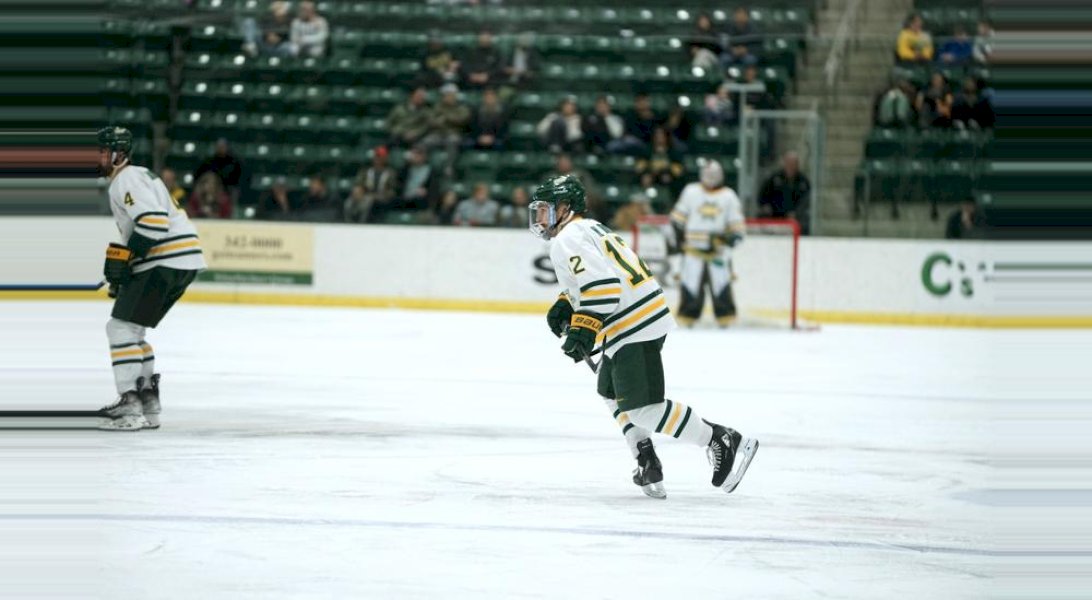 OSWEGO, N.Y.  –  The Oswego State Hockey team hosted the Best Western Clarion Oswego State Hockey Classic this weekend. Oswego faced off against the Saint Anselm Hawks. An explosive third period by the Lakers allowed them to coast by the Hawks this evening.

Shortly into the first period, the Hawks would score on a power play, giving them a 1-0 lead over the Lakers.

Noah Bull would get Oswego on the board with just over two minutes remaining in the first period. Bull would be assisted by Jackson Arcan and Ryan Dickinson.

The Hawks had few opportunities in the first to get shots on goal, with the Laker defense giving up only four shots on goal. Goalie Cal Schell would record three saves in the period.

Oswego opened up the second period with a goal scored less than two minutes into play. Daniel Colabufo would score the goal, receiving an assist from Shane Bull and Ben Addison. Oswego would take a 2-1 lead over the Hawks.

The remainder of the second period would remain quiet, with no more scores being made by either team. Schell would record two more saves in the period, bringing his total to five through two periods.

Halfway through the third period, the Hawks would tie the game at two with a fast break goal.

Alex DiCarlo would respond shortly after, hitting the top right corner of the goal, giving the Lakers a 3-2 lead. DiCarlo was assisted by Ryan Bunka.

Oswego would continue to put the pressure on, with Matt McQuade scoring another goal for the Lakers less than two minutes after DiCarlo’s goal. McQuade would be assisted by Noah Bull and Ryan Dickinson. Oswego would lead 4-2.

The Hawks would pull their goalie following the goal by McQuade. Noah Bull would score his second goal of the night on the open net, giving the Lakers a 5-2 lead.

Matt McQuade would net another goal for Oswego with less than 30 seconds remaining, giving them a 6-2 lead. McQuade would be assisted by Noah Bull and Jackson Arcan. Bull finished with four total points on the night. Goalie Cal Schell would finish with 14 saves on the evening.

Oswego will play the number three ranked Adrian Bulldogs tomorrow afternoon for the championship game. The puck drop is scheduled for 4pm on Saturday, December 31st.