Men’s hockey rally against Middlebury comes up one goal short 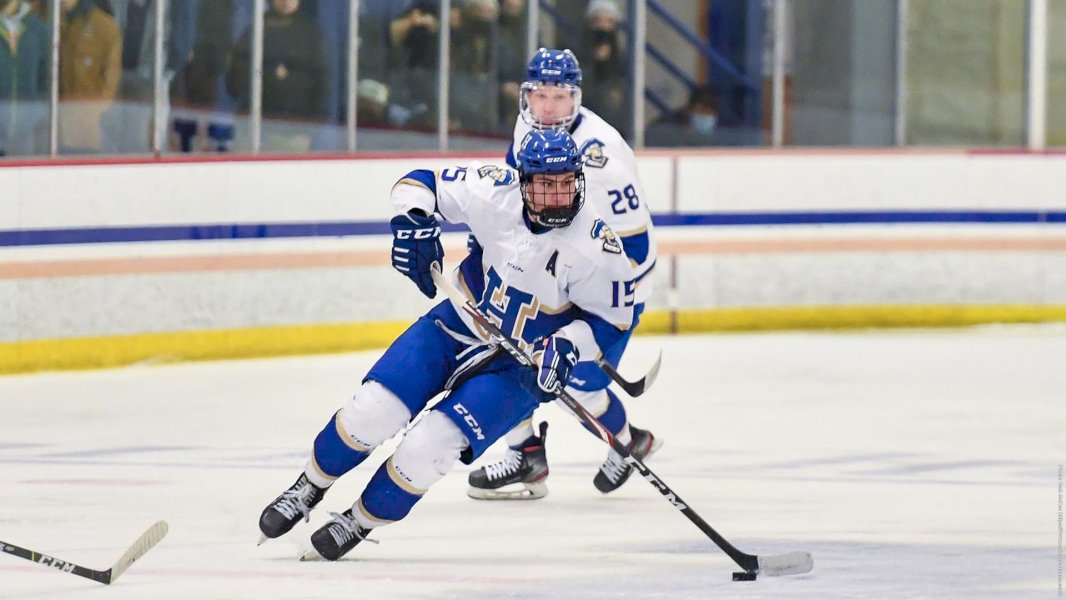 Middlebury College jumped out to a three-goal lead early in the second period and held on for a 3-2 NESCAC win against the Hamilton College Continentals at Hamilton’s Russell Sage Rink on Saturday afternoon.

The Continentals finished the regular season with an overall record of 10-9-1 including 9-8-1 in the conference. Sean Storr ’22 made 14 of his 25 saves in the second period. Storr was pulled with 1:07 left in the third period near the end of a Hamilton power play, which gave the Continentals a 6-on-4 advantage for 40 seconds. Fred Allaire ’23 won 21 of 32 faceoffs.

Andrej Hromic scored the Panthers’ first goal at 3:27 in the first period. Nolan Moore and Antoine Belisle passed the puck around the zone before slipping it to Hromic at the front of the net. Andrew Malatesta scored the second goal with 3:05 remaining in the period after he intercepted a pass at the blue line. Tucker Lamb scored the third goal at 4:06 in the second period off a pass from Matt Myers.

Nick Hawkins ’23 made it 3-1 on a power-play goal with 5:18 left in the second period. The goal came right off the first faceoff of the power play. Allaire won the faceoff and dropped the puck back to James Philpott ’25 above the left faceoff circle. Hawkins deflected Philpott’s shot past goaltender Jake Horoho (29 saves). Hawkins’ goal was his fourth this season, and Philpott is tied for the team lead with 11 assists.

Scott McKenzie ’25 pulled the Continentals within one at 6:51 in the third period. Grisha Gotovets ’25 took the puck away from Middlebury (6-12-3, 5-11-2) near the boards and passed it to McKenzie who was waiting in the slot. McKenzie one-timed a low shot past Horoho for his third goal of the season. Gotovets leads the team with 11 helpers and 18 points.

The Continentals ended the regular season in fifth place in the NESCAC standings. They will face fourth-seeded Wesleyan University on the road in a 2022 NESCAC Men’s Hockey Championship quarterfinal on Saturday, Feb. 26, at 4 p.m.

Women’s hockey goes into postseason on a high note