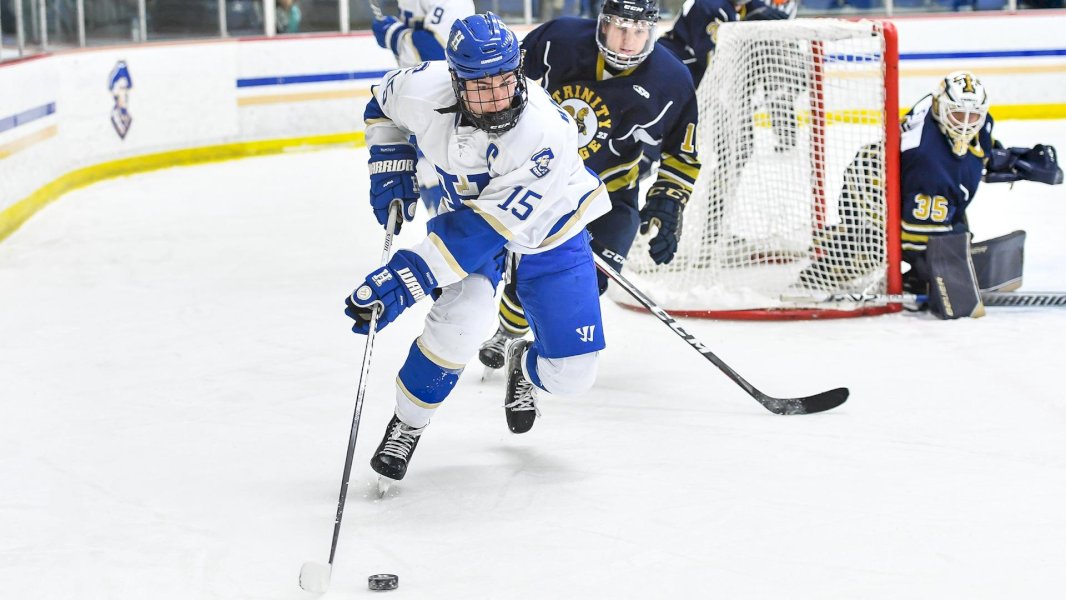 CLINTON, N.Y. — Amherst College’s Alex Wisco made 37 saves and the Mammoths edged the Hamilton College Continentals 2-1 in a clash between the top two teams in the NESCAC at Hamilton’s Russell Sage Rink on Friday night.

Greg McGunigle put the Mammoths in front just 2:07 into the first period. Nick Hawkins ’23 drew Hamilton even at 9:17 of the second period when he scored during a scramble in front of Amherst’s net after Wisco stopped a shot by Cade Groton ’23 from in close. Ben Zimmerman ’26 was also credited with an assist. Bobby Luca scored the game-winner with 4:23 left in the second on a deflection of a shot by McGunigle. The Continentals were on the power play for 4:41 of the third period and pulled their goaltender for an extra skater with just under three minutes left. Hamilton had a 6-on-4 advantage for the last 47.8 seconds of the third but couldn’t net the equalizer.
Notes

Charlie Archer ’25 turned away 23 shots for the Continentals. Zimmerman leads Hamilton with nine assists and 14 points. Hawkins scored the 10th goal of his career with the Continentals. Groton recorded his 22nd career point and won 9 of 14 faceoffs. Fred Allaire ’23 won 20 of 32 faceoffs for Hamilton. Jeremy Smith ’24 had four of the Continentals’ 13 blocked shots in his first home game this season. Ryan Tucker had assists on both Mammoths goals. Hamilton was 0-for-4 on the power play. The Continentals killed both of their penalties and allowed just one shot on goal during those power-play chances. Hamilton has scored three goals in the last three meetings with Amherst.
Next Game
The Continentals play a non-conference contest at nationally ranked No. 8 SUNY Geneseo (11-4-2 overall) on Saturday, Jan. 21 at 7 p.m.