Men’s hockey holds on for NESCAC quarterfinal win at Wesleyan 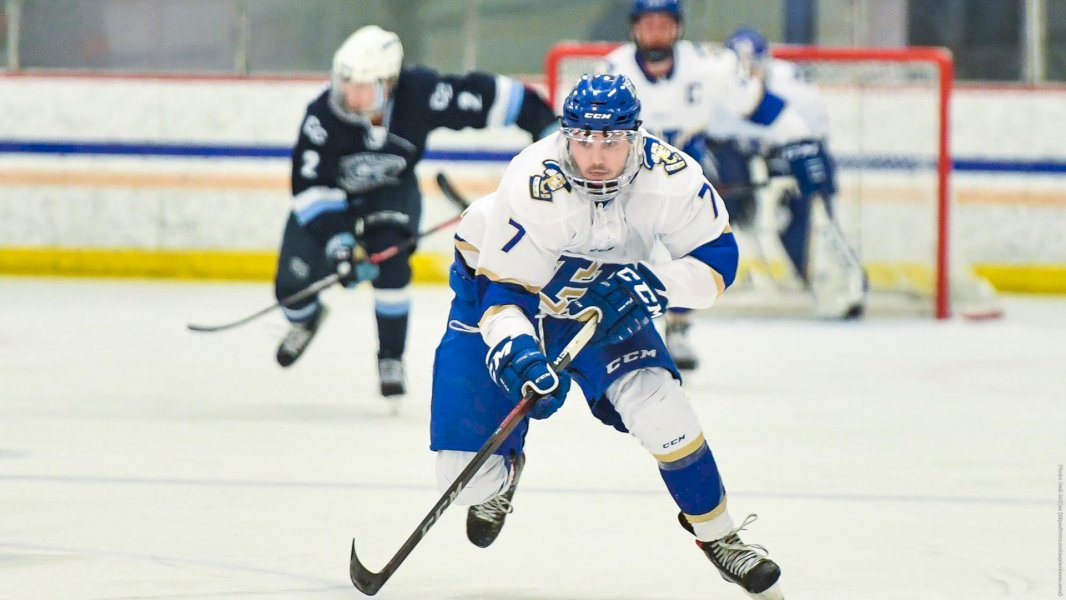 Hamilton College’s Sean Thomson ’23 scored the go-ahead goal late in the second period and the Continentals posted a 3-2 win against the Wesleyan University Cardinals in a 2022 NESCAC Men’s Hockey Championship quarterfinal at Wesleyan’s Spurrier-Snyder Rink on Sunday afternoon.

The fifth-seeded Continentals (11-9-1 overall) advanced to the championship semifinals for the third consecutive season and the 10th time in the history of the event. The Continentals will play No. 1 seed Colby College in Waterville, Maine, on Saturday, March 5 at 4:30 p.m.

The fourth-seeded Cardinals (10-12-3) had swept the season series against Hamilton with a 4-3 overtime win on Dec. 3 in Connecticut and a 3-1 victory on Jan. 28 at Russell Sage Rink. Marc Smith tallied 16 saves, and Stevie O’Connor won 8 of 11 faceoffs.

In addition to the goal, Thomson also blocked three shots. Matt Gellerman ’24 picked up two assists and he is second on the team with 17 points. Cade Groton ’23 and Scott McKenzie ’25 won eight faceoffs apiece. Sean Storr ’22 posted 26 saves including 11 in the third period. Despite getting outshot 28-19, the Continentals won 26 of 47 faceoffs and blocked 15 shots.

Hamilton generated a few scoring chances in the first couple minutes of the first period with three shots and four faceoff wins. After one of those faceoff wins, Nick Rutigliano ’22 gathered the puck and launched a slap shot from near the red line that Smith somehow missed 2:45 into the period. James Philpott ’25 and McKenzie earned the assists on Rutigliano’s seventh goal. Philpott leads the team with 12 helpers.

The Cardinals evened the score with 3:41 left in the first on a goal by Wiggle Kerbrat with assists from Owen Sweet and Matt Zandi. Wesleyan rushed the puck up the ice and Sweet sent a centering pass to Kerbrat in the slot that Storr deflected. The puck popped up in the air and Kerbrat batted it in from just outside the crease.

The Continentals reclaimed the lead 4:44 into the second period on the third goal this season by Groton. Carter Dwyer ’23 dropped the puck off for Groton above the right faceoff circle and his wicked wrist shot from near the blue line found the back of the net.

Wesleyan tied the score again on a goal by Go Umera with 6:50 remaining in the second. Jake Lachance and Kyle Anderson had the assists. Umera’s wrist shot from above the right faceoff circle to the upper left-hand corner of the goal knotted the score at 2-2.

Hamilton responded with 4:17 to go in the period on Thomson’s second career goal. The Continentals intercepted a pass in the neutral zone and Gellerman pushed the puck back into their offensive zone. Gellerman sent it over to Thomson inside the right faceoff circle and he threw the puck towards the low slot where it was deflected by a Wesleyan defenseman past Smith.

The Cardinals pulled Smith for an extra skater with 1:51 remaining. Wesleyan attempted three quick shots but none were on goal, and Hamilton called its timeout with 1:09 left. Sweet produced a wrist shot that Storr swallowed up with 10 seconds to go. Wesleyan used its timeout to set up one final play but Fred Allaire ’23 won the faceoff for the Continentals and sent the puck to the corner where it stayed for a few seconds. Allaire blocked a desperation shot attempt, and Hamilton escaped with its 11th NESCAC postseason victory.

UTICA CAPS OFF WEEKEND WITH VICTORY

DiGirolamo is CHA Defenseman of the Month